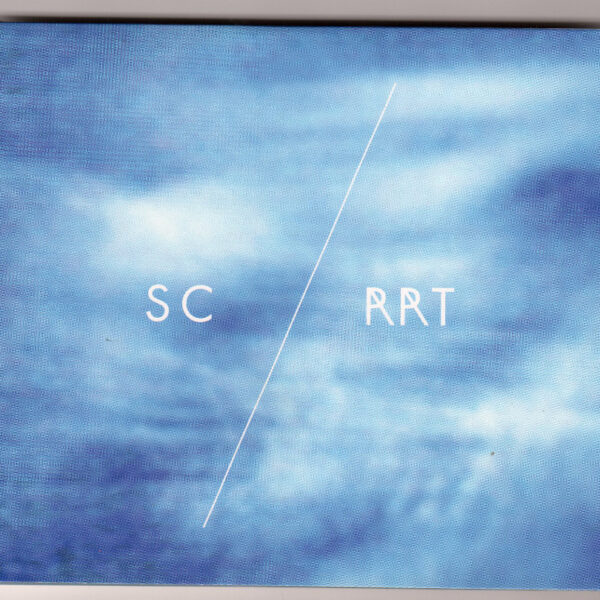 It took me a while to find the right time for this double disc – disc one, an unindexed 54 minutes and a supplementary half an hour on the other disc. After an initial aural foray a month or two back whilst engaged in various degrees of household pottering it thereafter remained lurking on the ‘to review’ pile, all pale blue, square, flat and accusatory. I think listening to all that Phill Niblock the other week primed me for some more long form drone action, though. So, this weekend, having scouted out the general lie of the land previous-like as mentioned I sofa-d up and listened to it. And, despite a move from sofa to floor halfway through, I did a full and thorough listen. Herein I reveal the results of that fateful afternoon’s listening and the strange thoughts thus engendered…Read on, I implore you…

The contents of the two discs are in fact ‘as is’ documents of two different live performances involving a loose working set-up where the trio improvised over a multi-channel installation of various formats. Example configurations: ‘sometimes playing through 6 speakers and 3 subs, and at other times, through 12 speakers etc.’ So says the liner notes, and who are we to doubt them? The CD is presented in two channels only, through yer bog-standard stereo speakers, in this case. There is an element of immersion in the live set up which is replaced by one of projection with this form of documentation; apparently in concert the performers sat in the middle of the room with the audience around them and then the loudspeakers in turn surrounding all of them, but what is lost in that respect does not thankfully adversely affect the music when formatted for stereo.

Shifting Currents proves to be an apt title with multiple meanings in this scenario. Not only do we get ebbs and flows of layered sound through the large time-canvases, the palette is one of domestic appliances and industrial installations, step-down transformers, sub-stations, extension cables, the national grid: electrical flow.

Creating these long-formidable shifting sounds are: Rowe – guitar and electronics (including his trusty shortwave, it sounds like). Bill Thompson is responsible, therefore he has been assigned responsibility for Live Electronics which involves, in this case, reprocessing masses of instrumental snippets extracted painlessly from the other participants (over a period of a year so they didn’t feel a thing) and then piping and smoothing them into a suitable sonic back drop. Rockin’ Rick Reed brandishes the iconic EMS synthi, synonymous with your favourite and mine Conny S and also famously used in Pink Floyd’s ‘On The Run’.

In the Phill Niblock review I recently wrote I scribbled feverishly on about negative space (my god, it’s full of speakers.) In the sounds of Shifting Currents there is an implied negative space carved out from electric projections, a hollowness and scale that traces the room where it was recorded by people in front of people in which thin fizzes and crackles are knitted into streams like copper filaments in electric cables snaking out over a floor. In this room the electronics are filtered (like you have to in order to get rid of an earth hum); high pass, band bass, holiday inn – all that is left are grains and particles, electro-acoustic grit, a palette of loose connections, cryptic tones and traces of labour saving machinery.

A shifting bed of drones, atonal, textural; controlled feedback, fuzzing, flowing and receding; manipulation of objects. Shuffling about occurs (I think I count a cough on each CD, a great British tradition in concert going) as does shifting – of currents, of bums in chairs and of those classic objects on those equally timeless tables. Keith’s radio dial pops in to say hi alongside electronics that uncannily echo the clatter of a teacup, conspiring between them to evoke the ambiance of an imagined avant-garde tea-room, between the click of a second hand, bathed in an unearthly blue stasis… station… static…

On disc one it takes twenty minutes or so, but eventually there is a gradual accretion of volume, foreground events and agitation of gestural elements. In other words, it takes a while for much to happen besides the stalking of a background by itself and a ground being established.

Snatches of short-wave hiss and pop, clunked guitar strings, the proceedings of the fifth-dimensional table-top jumble sale, not seen, but heard, fill the performance space like the improvisational equivalent of a wi-fi signal. Small and unusual characteristics, obtuse corners and angles, re-contextualise familiar sound sources and scales. Even the EMS’ normally more outgoing characteristics are involuted to the point of disappearing back up its own power cable to hide in the mains supply.

The strings above the bridge of a guitar are plucked; a disturbed dulcimer player loses his train of thought before clacking down another dominos whilst the donut-shaped, fly-killing light I remember seeing in the back of the supermarket bakery whilst being taken shopping as a child buzzes menacingly.

Over the course of the CDs we are treated to slowly shifting and modulating complex and atonal harmonics that share something of the elementality of the electricity that animates them whilst all the while we are aware that there is a meshwork frame containing proceedings, the echo of a space, a room without walls, a Faraday cage in stereo, diffused sound propelled mechanically, as from the fan an ioniser, a machine that zaps dust; snap, and an event materialises and disappears instantaneously in ozone and a controlled blue spark, absence remains, tangible and physical, present, transparent, a wooden table-top overlaid with a mesh synth signal…

In a similar manner to the Taj Mahal Travellers (or indeed AMM), this album involves unusually focussed (which can of course be read two ways) drifting agglomerations of electro-acoustic sustain which over the course of extended drifts gradually coalesce to reveal unexpected forms and perspectives. Which, needless to say, can be rather tasty, when all is said and done. Swell!