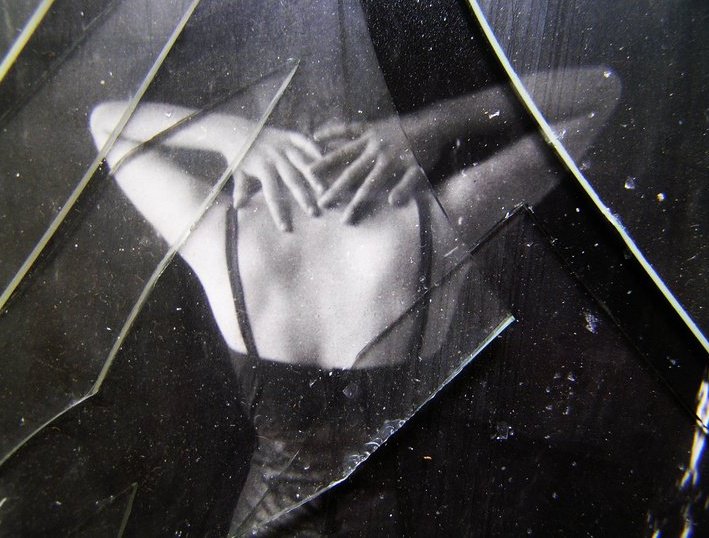 With Gordon Sharp, step in the Cindytalk carousel that carries your heart away at an outrageous speed for more than two minutes, a whirling vortex brought to a plateau of mixed signals, a dense affair of collisions at high velocity. Signals fly by, get past one another, it’s a highly dynamic kind of dance (without dissipating : all sounds perfectly choreographed) going on : whistling snakes, flanged-up whips crackling, then the high tone of traffic decreases, and vanishes…Get on board for a navigation sequence in the Interzone, get the feeling of intermediary locations, feel the dark corners and its sinister wagons slugging by; a William Burroughs soundtrack. Hear this man in pain, experiencing a state, begging for a pause, as heavy bells toll around, grinding at his spirits, crushing his expectations. Note how, after this painful preamble, the sounds grow a tissue of contrasted emissions : large spreads of of sirens, bells and loops, steam-powered blows, all sunset-coloured. Oh no, nothing really creepy there, just the eerie feeling of a reptilian moment being inaugurated, with its twilight population : a landscape otherwise dormant.

Often dream-like, mixes of stage shows, machine parts and child at play articulate another piece. Sleepwalking through states, we move along endless corridors, from which we emerge (wake up) as Lil’ Nemoes. Find yourself in successive places, all shifting as the pieces start and end : there’s this harbor, with bells in the background and signals from various sources. Too numerous to be answered, they resonate around and are soon impossible to locate anyway. Again, it’s a view : you’re standing by, you don’t belong in the picture, the movie is not yours, you’re out. See, some works include you, some count you out. Actually it’s not worth trying to label these pieces, save maybe through a vague common denominator “dream sequence”, which would be awful, as each piece is a suspended tableau of collected impressions (menace-free), which you’re not even contemplating, but merely witnessing.

Dig further more, and check Nicola Ratti‘s ossario : clear, whitewashed foundations are exposed amidst a bouncing puncture and brief circulating drones. Both space and percussive points build up, markers here and there, as for a meticulous draft (or print, on graph paper). The compositions sound like a series of topographical surveys, a method. Like a global construction Nicola Ratti is building : some minimal architecture from blueprint on. From tiny planted elements, he erects white “architectones” (Malevitch), model-like. Testing materials, measuring the pertinence of such element, assembling parts that fit, adjusting levels. Verbalizing is powerless here, as the constructions are trials; sure, the pieces are finished ones, completed, usually with care and finesse. But the nakedness and well-lit images confirm tis lasting impression of foundations being laid, suggesting potential constructions. They sound like propositions, plans. Far from the muddy cassette sounds heard somewhere else, Nicola Ratti deal seems to clinically display organized forms, looking like a graphic score à la Kandinsky. Repetition as foundation to ensure the erection of a careful monument : beautiful and dry, though warm and generous in its textures and directions, with hardly any decorative stuff, no excess, but rather a calculated dosage of ingredients.

Unfinished, for William Turner, painter appears to be an impressionist essay in three parts opening with arpeggios that set the tone immediately : there will be light, and lightness. With guitar ! Field recordings (at some distance) gently place you on the shore along with people (your kind), both adults and children; playing water games ? Distant enough to focus on the heart of the (often) marine paintings of JMW, as the sleeve puts it : water, light, sun (reflection). And you (you, me, he) are in. Oxymoron : the stillness of a vivid landscape, the permanence of a living element. As the strings clearly vibrate, scintillating myriads on the surface, the image is fixated within the instant for contemplation. Unfolding, retracting, along the flux/reflux of the marine situation. Stranded in the middle of it or standing on the firmland,, the relationship thus established is that of a singular individual facing an immensity, a totality. On a bad day, this could turn into the drama of Caspar Friedrich’s monk by the sea, but no gloom here, just the shimmering light playing games with the unfinished liquid. The guitar vibrato suspends, sustains the seized moment of this contemplation, discarding all anecdote as a gauze filter would. Needless to say, the general atmosphere summons a spiritual feel, the achievement of the project, I guess : what is conveyed by Turner’s paintings is displayed here through Burkhard Stangl‘s caressing playing, marrying both static situation and vivid motion. A beautiful exaggerate vibrancy, which is the main instrument here, to me, to guarantee this double status : stillness/(perpetual) motion.

Kitchen-wise, Xavier Charles cooks a five parts session with his fingers, mouth, breath, in a domestic landscape; hums, drones, toned-down vibes, low-tones of appliances that sometimes just shut off. Click. Masses of air move, through whatever cavity available. Breathing turns the familiar into a living milieu, an organism. Valves open, close discreetly. At times, outer events ( birds, people, vehicles, roadwork…) filter through, but the pressurized feel (never claustrophobic, though) is always close; as a counterpoint, who cares; as a punctuation, rather. The clarinet(s) acts like a probe, a very indulgent clinical image I admit, (though also wet, thanks to condensation).

As space and events are prominently featured in these pieces, the traveling stereo plays a huge part, smoothing the instrument interventions (which can even be very wordy, talkative, as in the “washing machine” episode; Notes are distinct from blows of air, as is playing the instrument from breathing through it. Sustains and short bursts compete. It’s about rubbing these components one against the other, but smoothly, softly. Not playing one against the other, but making meetings, completing, making each bit a whole.