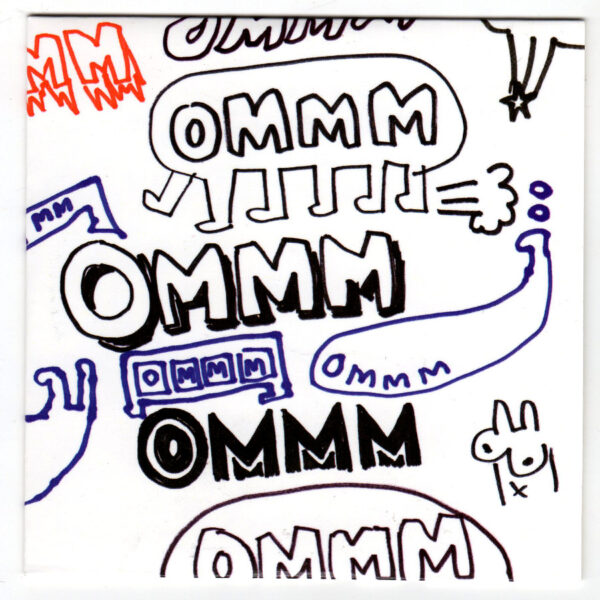 Exciting and fairly crazy collage tape work from Edmund Davie, performing as oMMM for his album Sound Art (ADAADAT ADA0028). He’s worked his malarkey recently for Exotic Pylon on the cassette release Re-Animator Volume 1, the content of which was deconstructed and reassembled – hopefully in a ramshackle garden shed, using rusty tinsnips – by Dan Hayhurst of Sculpture, and could be another one to investigate. oMMM’s rough edges and thrown-together qualities belie the fact that all of these assemblies are probably very carefully crafted, the deliberate placement of one denatured sound on top of another to allow ingenious leakages and sound-apertures to reveal themselves. He’s building a subtly-shifting crazy-house with false walls and angled staircases, while a thousand and one semi-familiar faces peer in through the tilted windows. While playful with his choice of samples and vari-speeded voices, there’s no silly irony or juxtaposition on Sound Art that lesser creators indulge in, and oMMM emerges as a very promising talent. From February 2014.

Hokei are a four-piece of contemporary rock musicians from Poland, led by guitarist P. Bukowski and singer / bassist K. Ziolek, and boasting a line-up with two very busy drummers and plenty of bizarre synthesizer action. On Don’t Go (LADO ABC LADO B/22LP) it’s hard to pin down the prevailing mood, as the players shift violently from angry agitated post-punk growling and thrash, to slow melancholic wallow-scapes and plaints of the deepest sorrowful tint. While they may verge on the operatic with their self-important psychological dramas, and the brutish singing is far too histrionic for my tastes, Hokei do achieve many exciting moments of discordant, ugly and bleak twistedness here, the tension occasionally relieved when they slip into the “Isis” mode. Quite good. From February 2014.

Massimo Falascone has assembled a grand-design sound-artwork out of 32 fragments, which he calls “short mu-pieces”, on Variazioni Mumacs (PUBLIC EYESORE 126). While he plays a good deal of it himself using many saxophones, vocals, live electronics, samples and field recordings, he’s also enlisted the help of numerous collaborators, including the all-rounder Bob Marsh with his violin, cello and voice; and bassists, guitarists, pianists and percussionists who add sprinkles of jazzy backdrops and free-improv outbursts to the short, bitty particles of sax-based blurtings. Throughout, vocal interjections recite tiny narratives and add to the confusion as much as the track titles, which are suggestive of a modernist story or opera in the mode of Robert Ashley. So many gaps to fill and so much mental exertion, but it’s worthwhile. By turns puzzling and beautiful, often extremely entertaining. From 19 February 2014.

Neukalm (GRAUTAG RECORDS GTR007) is the latest “grey” item we’ve received from the Berlin label Grautag Records, whose owner Nicolas Moulin has steadfastly maintained his plan of decorating every single release on his imprint with depressing grey photographs of vacant and bleak vistas, in pursuit of impressing his melancholy vision of despair across the modern world. This double LP appears to be the first solo work of the French musician Christian Vialard, who has guested on scattered compilations since 2007 and also owns the label Tiramizu. Vialard turns in some impeccable work on these excitingly chilled instrumentals with his synths, organs, guitars and beatboxes, and while it’s reliably dark, cold and urbanised mechanical futurism throughout, he can’t seem to avoid making numerous time-travel leaps back into the 1980s where he presumably anticipates being welcomed as a fellow innovator of “Cold Wave”. He’s aided however by the fab Fred Bigot, who not only plays on the record but also mixed and produced it; this brooding master of blackened minimal techno and rockabilly-inflected guitar stabs is just the man you need as your secret weapon for studio projects like this. Perfect music for walking down the city’s filthy pavements in the rain when you’re hungry, lost, and in a grumpy mood. From February 2014.

(winter pale) red sun (EH?76) is a menacing chiller of electronic drone and sine waves, deployed with the malice of a mad scientist’s laser beam. It’s realised by Bruno Duplant who rigged up his organ with some unspecified electro-acoustic “devices” to unleash its hidden potential for destruction and pain. He’s joined by collaborators Pedro Chambel and Fergus Kelly, who bring processed electronics, noise and sine waves to the table. I may be reading this single 41-minute intenso-sustain-sprawl as a force for evil, but I’d be quite wrong, since Duplant actually intends something quite benign, warming himself under the “wings of fire” of the red sun which “dazzles us, intoxicates us”. Indeed he wishes to invoke this red sun at a crucial time when all of mankind has apparently fallen into a torpor, a lethargic state which prevents us getting on with all the urgent tasks at hand. Perhaps Duplant sees himself as a latter-day druid or early magician, stirring his fellow primitive men into action within the stone circle by enacting these sun-based rituals. Either way this is excellent minimal drone with plenty of dynamics and subtle layerings. From 19 February 2014.