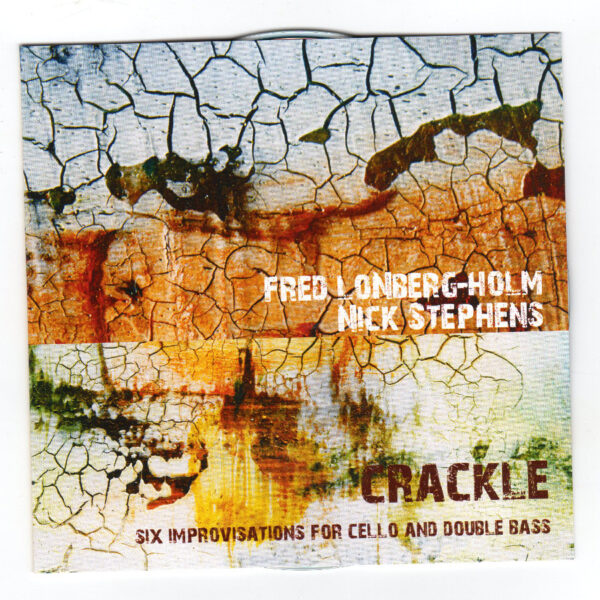 Recorded in Northwood in 2011, the album consists of six improvisations between cellist Fred Lonberg-Holm and double bassist Nick Stephens. The two work well together in forming a shared mode of expression. The mastery of their instruments is in no doubt as they tackle the hell-for-leather moments that punctuate the instances of lyrical tranquility. How close the world of free-jazz improvisation is to classical music can be attested by the fact that parts of each study would sit happily in a number of mid-to-late 20th century classical chamber pieces. The only thing that might alert you otherwise is the expression and fluidity in a number of the runs.

It struck me in the fierier points how much noise can be gained from just two instruments. A full range of techniques are drawn upon to elicit sound from the tools at hand. This enables the protagonists to weave a multi-layered work that negotiates all dynamics. There is a restlessness to the pieces that never allows you to settle whilst they penetrate the shifting strands that cross their handiwork. They take pleasure in any method to extract a sound. Nothing is squandered, nothing is misdirected. Every expressive aspect of the cello and double bass are considered. Furious runs nudge against agitated gestures. Expressive bowing skims, strokes and touches. The subtle gradations within each tone colour are examined, manipulated, and in some cases battered, in order to fully explore the distinct character and quality of each musical sound. The points of reference are dispersed through the multitude of approaches adopted and the dexterity employed in moving between them. The connective tissue that audiences invariably rely upon are thrown away. Indistinct relationships occur as gesture is removed from sound through the ambiguity of the means of production. Note systems and intervals are put to their sternest test, as are beat, metre, structure, melody and harmony. Their concentration in the task is shown through the dialogues that they build, not only between themselves but also their instrument.

It is not often that you come across artists who take such joy in reducing the lexicon of their instruments to its constituent parts in order to reinterpret it. This encourages an active listening as the music/notes are smashed into their most fundamental elements. They interrogate the qualities of sound, and it is as if we are asked to be present at the post-mortem. The instruments are abused and maltreated in the sole interest of producing noise. Only at certain times are sounds generated by what an audience might identify as an instrument, or relate to standard forms. We are left to view hostilities between the artists and their materials rather than a dialogue involving pitch and rhythm. Each verbalisation conveys a thousand messages, every gesture demands a response. A new soundworld is constructed, drawn from a panoply of sounds that have been deconstructed. The potentialities of the beauty of sound, except in its widest sense, will not detain us long in this sometimes austere place.

The allure of works such as this dwells in the originality and the resourcefulness, as well as the technique of those involved. To do this a thorough knowledge of one’s instrument and the possibilities at hand are required. The results are not for the faint-hearted, but then some of the best music does often require the listener to do more than just sit and hear. It frequently challenges us and our preconceptions, makes us listen in different ways. The album is not a pretty experience but does offer a dynamically rich one. There is much to take pleasure in the areas that are traversed. Genesis and annihilation live together side by side in each moment. Do you want to pick up the pieces?