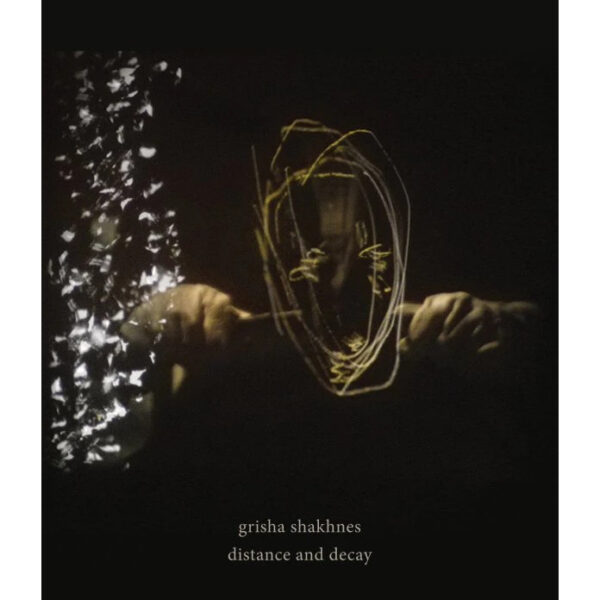 Working with cassette tapes and various basic recording and mixing devices and equipment, the sound composer Grisha Shakhnes takes field recordings of everyday sounds and noises and works manipulated instrumental music pieces in with these to produce long sound tapestries of various repeating noise loops that gradually change and degrade, merging into other noise loops that also transform into yet more loops. Hence we have the album’s title “Distance and Decay” and a general theme of how increasing temporal distance from events coupled with the unreliability of human memory can distort the original incidents. Living during a period in which the narrative of significant historical events changes with the passage of time so as to distort the events themselves and call the accuracy of their original reporting or recording into question, with the result that the events become highly politicised and controversial, and the truth if it exists falls by the wayside, I find the message conveyed here very compelling indeed.

The music itself is very absorbing and at once intimate and comforting in some ways. Sounds are softened and muffled and any edginess or roughness they may have had originally is covered over by layers of murkiness. Familiar noises become unrecognisable but somehow remain unthreatening: that is really some feat on Shakhnes’ part. There might be a lot of groping about in a dark fug but there’s no suggestion of something sinister lying in wait for us. True, each track can at times be an arduous journey in sound but the length is a crucial part of the music. At any point in each track there’s a fair amount of repetition going on within the layers of sonic texture and yet we end up moving quite a long way from the beginning to the end.

The whole work is divided into four tracks but there’s not a great deal of difference among them unless you like trying to spot and recognise an organ drone on “Concrete” (not all that difficult actually) or stringed instruments on some other track. Best really to let it all embrace you and enter your head. Perhaps images from memories long forgotten may start to pass through your mind.

Funnily after playing this CD, I have a memory of clunky-clanky washing-machine music with a somewhat wonky rotor threading its way through my head from one ear to the other and back again.

This album is the second solo effort by Grisha Shakhnes under his own name after recording other releases under the name of Mites. Shakhnes lives in Tel Aviv.