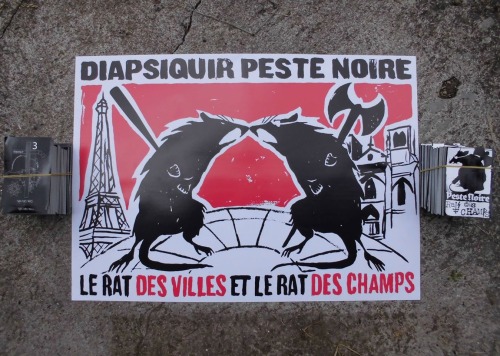 Interesting concept: the rats of the city or Paris, represented by the industrial black metal of Diapsiquir, do battle against the rats of the country (or everywhere in France outside Paris) whose honour is upheld by Peste Noire. It’s a pity then that both bands are restricted to 10 minutes each on this vinyl split recording and the whole thing is over and done with in 20 minutes, with the surface of the concept barely brushed, let alone scratched.

Diapsiquir is often described as an avant-garde / experimental industrial black metal band but to my mind these guys are basically an alternative mainstream rock band with a fuzzy black metal sheen. Their contribution is heavy on the lyrics and light on the experimentation, unless what is meant by “experimentation” are the stop-start rhythms, the purring bass drones beneath them and the way the music (on “Javel”, I must hasten to say) suddenly breaks in the middle and turns into a rather different song with blaring brass and scratched record in the background. The band’s effort is brave, given that the song risks losing its momentum with the sudden change and the uneven volume that results, and the guys just manage to keep the whole thing together. Their other song which turns out to be a cover is a more conventional melodic affair that starts out subdued and then becomes a raucous sing-along with some bouncy rhythm patterns to round off the whole side.

Peste Noire offer a more clownish and perhaps stereotypically “French” set with accordion-flecked music, drunken singing and hysterical screeching. The whole ambience of their part of the record is intended to be Grand Guignol hellish: a mixture of the bizarre, surreal, melodramatic, theatrical and slack-jawed horrific. Songs lope along in a manner at once jaunty, seemingly nonchalant and yet despairing and bleak. The music can be loud and hard-hitting as if hammering home again and again until listeners are all but insensate, that life is more horrific in a bizarre black-comedy way than we and they (Peste Noire) can imagine. PN’s side concludes with the same accordion melody playing in a mournful and resigned way. The possibility exists that PN’s side is intended as satirical commentary on social divisions in France as imagined by the French themselves.

The shortness of the recording doesn’t allow for a real rivalry (or rivalry leading to a mutual understanding) to develop between the two bands and the urban / non-urban divide remains at a superficial level. The split becomes a novelty work best suited to those who collect Diapsiquir and Peste Noire recordings; it’s certainly not a definitive work for Peste Noire and probably the same applies for Diapsiquir. It’s not likely to attract any new fans to either band’s work.