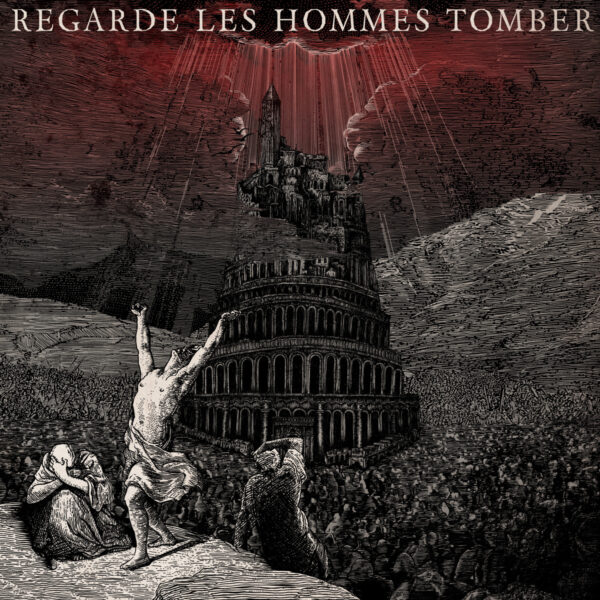 With a sonorous name like Regarde Les Hommes Tomber (the English translation “See How They Fall” not possessing quite the same epic and fatalistic resonance), this French band promises something special on its debut album. Right from the start with a pounding drum beat suggesting that the End of the World As We Know It is Nigh, these guys put everything they have into the music. The band’s music is a combination of atmospheric melodic post-BM and hard-hitting doom sludge; whether the style of music preceded the naming of the band or the name came first – it’s actually derived from a movie made in the 1990s – probably doesn’t matter as somehow it’s hard to imagine any other style of music (apart from perhaps the most apocalyptic forms of black metal) being appropriate.

The instrumental prelude, slow and majestic, placing the band’s stylistic bona fides on the table for all to hear, is done with in just over four minutes and from then on, you’re either with the band’s program or not. The album proper begins with “Wanderer of Eternity”, more typical of what RLHT offers, with roaring gravelly near-BM vocals, a sound not too distorted yet not that clean either, and air raid siren lead guitar over a solid rhythm backing. The overall ambience is often very sinister and filled with foreboding of what hellish terror may come. In most songs, the lyrics dominate the music and they tell of humanity’s hubris in presuming to be the equal of God and building the Tower of Babel which God subsequently topples, causing humans to be divided among themselves by various languages and to serve Him in abject bondage through false religion a thousand years hence.

As the recording progresses, the stark apocalyptic ambience that embraces the whole work might come to hang heavily over listeners as well, drawing them into its hellish world where humanity toils in poverty and thrall to an oppressive ideology. The music is in service to the album’s theme from the almost hypnotic tribal drumming to the doom-laden riffs, the resounding doom guitar tones when they occur, the oddly disembodied chanting in parts and the almost hysterical lead and tremolo guitars. The vocals have that warning quality of a prophet come from the wilderness, having received divine messages and now bringing them to the attention of the unbelieving masses. In later parts of the recording, the band make effective use of reverb and space in and around the instrumental passages to suggest the darkness that pervades the world in which the music plays.

Given that this is a debut album, and a concept album as well, you expect there will be flaws here and there, and especially in the danger zone after the halfway mark where filler material is most likely to proliferate. But RLHT have that problem licked with “A Thousand Years of Servitude”, one of the more melodic and emotional songs here. The momentum built up flows into the final track “The Fall” which expresses humanity’s defiance towards a false and weak God that has oppressed people for too long – until now.

Hard to believe that all of this happens in just under 40 minutes: so monumental and epic is this recording that your head feels that it’s been blasted with heavy doom music slabs for twice that length. The story is dark and overwhelming in its sadness but a glimmer of hope appears near the end. This recording is not for the faint of heart but it offers plenty to reward those who can follow it.