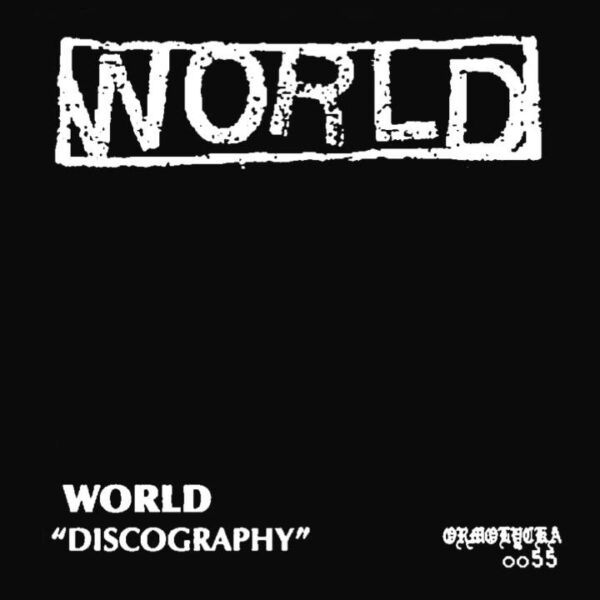 For obvious reasons, trying to find information on Google about World is rather difficult so I have had to rely on the Aquarius Records website and my own impressions of the music to come up with something interesting about this Japanese band. These guys rely almost completely on a twin-drumming and vocal attack, and not much else besides. The music is distorted throughout the recording and some inventive and intriguing sounds come out of the distortion. On this unusual basis the guys create brutal noise / grind sonic terror of which the outstanding feature is the gibbering and growling singing which for the most part sounds like a pack of demon dogs fighting over human skeletons tossed down to them from above ground. You wonder how happy or upset these hell hounds are during periods when humankind is on its best behaviour, peace and stability reign throughout the world, and very few pickings fall to the nether worlds.

For all the slavering and frenzied scrabbling of the demented beast-like raging, the drumming is actually very good – it’s solid and super-intense as though the drummers were permanently hooked up to bags of perpetually glowing yellow energy juice (the stuff that sends the Geiger counters berserk) to fuel their thunderous pummelling efforts. The drumming can be so fast and distorted that the continuous thud and judder becomes a solid slab of thick mesmerising trance thunder that opens up the mind and instils an unnatural calm, like the calm experienced by victims of bear attacks when they’re being crushed or their heads are between the bear’s jaws. These guys must need new kits after every song they do; at least they’re keeping some workers employed and happy. After hearing this, I’m not sure I could ever go back to hearing death metal / grindcore blast-beat bashoramas.

The entire cassette is an almighty monster of grinding noise and sheer power brutality. On Side A, the best music comes with the last track there: an all-out attack on the senses and the mind courtesy of highly distorted juggernaut monster sumo-drumming, thick and harsh and jack-hammer penetrating, with the vocals as horrific and gargly as the drumming is dense. The music varies from intense, almost machine-like, to caveman and clownish. On Side B, I swear that parts of the recording must be using distorted drone guitar samples. Drumming is clear and sharp in spite of the scuzzy acid production. The dual (and duelling) vocals can be Warner-Bros-Tasmanian-Devil cartoony but against a background of violent noise and distortion, few other vocalisation styles can hold their own. As Side B progresses, everything becomes ever more deranged and chaotic, and the voices go from Boredoms-type screaming to death metal grunts, pigsty snorting, shouts and everything in amongst those extremes.

The recording has a very neo-primitive air and tracks are not named on the cassette or the cassette sleeve. The songs don’t fade in and out well and some seem deliberately cut off in keeping with the lo-fi spirit of the music.

Perhaps fortunately the album ends sooner – it’s not very long – rather than later. The full-on brutality can be a hard slog to endure and I wonder if there is only so much that can be done with just a drums-n-vocals set-up in the world of brutal noise industrial grind. If you marvel that such music can exist – indeed, if you even doubt that it exists and you suspect I am making this all up for my own sadistic pleasure (because copies of the tape are very limited) – someone has actually uploaded the entire recording to Youtube. As one commenter there says, you know the whole album is good just from seeing the cover.