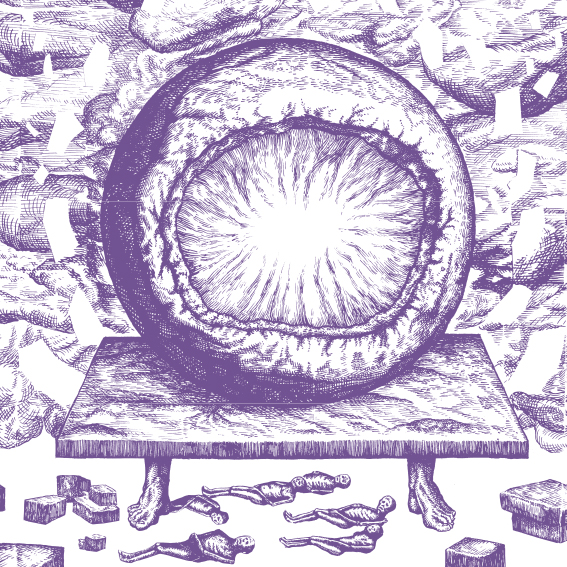 There is often something in early music which speaks to the idea of sound as human necessity or compulsion, something not just old, but forceful and innate. The second record by multi instrumentalist improvisers Kim Delcour and Brecht Ameel, Remote Hologram, attempts to connect with such a depth without losing sight of their own compositional interests. Grounded in an exploration of early music and neglected instrumentation it draws from old musics whilst exploring the social and ritual functions this music may have been presented in. On the first half electronics and traditional instrumentation compete for space, arpeggiated bass modulations versus harsh monophonic tones recalling Tibetan indigenous music and the wailing low drones of the dunghen. The latter half is comprised of extended improvisations on the Ondes Martenot. Often cited as the first electronic instrument, the Martenot is now all but obsolete; the strange play of new and old that haunts the entire record . Although the baffling mismatched timbres and reedy drones of the opening are consistently surprising and expressive, it is the depth and singular beauty of these later pieces which make the album essential.

The lovely, thick, oscillating drones of the martenot are enriched by sensitive and ambitious improvisation. Unaccompanied and then incorporated into composition, the final side is a patient and unconventional exploration of the martenot’s range, sliding between registers and reaching for strange clashing resonances. The sound and effect replicates that of choral religious music. The unearthly beginnings of the record become more human as the focused drones replace the harsh counterpoint. The unexpected pulses and glissando of the martinot are frail and graceful; long-form drones concentrated down to essences and then building into bizarre raptures. The wary tone feels like great effort is directed in its maintenance. This quality, alongside the complexity of the movement between scales and registers, provides the entire project with a sense of unease and disquiet.

Most striking is the way in which parallels are drawn within the varied pieces and their distinctive instrumentation; natural and electronic resonances incorporated so carefully as to be indistinguishable. Shifting between rich polyphony and harsh atonality, the timbre seemingly warping under pressure, indicates again the concern with old and new contexts. The title presents an image of science fiction and future technology, whilst the music is preoccupied with what can be formed from the earliest music, the ultimate goal being the presentation of anachronistic instruments and methods whilst looking to the contemporary avant garde for composition and improvisation. The sense is that this primitive music could sound both alien and futuristic. More focused than the duos previous work, the diverse yet distinctive record balances regression and innovation and indulges the performers interests whilst also showing a willingness to deviate from assumptions surrounding those interests. Nothing here is a staid re-enactment. This ritual music, set to accompany some esoteric rite is never academic nor gimmicky. Razen are intent on confidently performing in these modes, whilst bringing compositional nuance and broader musical influences and this startlingly original record is a lovely representation of their work so far.