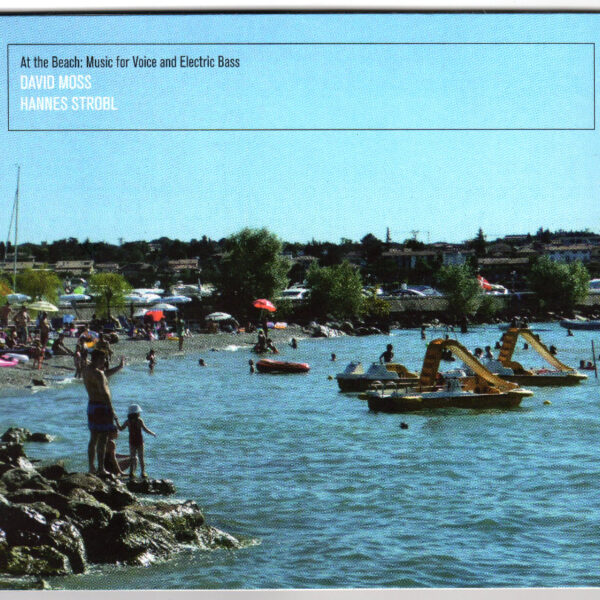 As both an epigram and epilogue to this duo recording, vocalist David Moss tells the story of ’a mustard plant that grows at the side of the road. Most of the time no one pays any attention, but every once in a while a card rushes by, hits a stone, stone flicks up, hits that mustard plant, releases some seeds into the air and that person walking by at that moment smells that whiff, that unreflected… uninflected… thing that takes him somewhere’. Resonance may be felt in the arising and passing of strange and exotic sensations distinctive and indistinct that occur throughout, managing to compel and confuse in the same dizzy spell.

Enthusiastic was Moss’ response to the proposal of his Denseland band-mate, bassist and sound artist Hannes Strobl, who approached him with a number of ‘songframeworks’ that delve into the ‘unheard potential’ of the electric bass (a preoccupation of Strobl’s); he summoned equal measures of semantic and syllabic eccentricity and saw to it that the work was completed ‘easily and fruitfully’. In each of these immersive, sometimes agitated, bassy soundscapes the musicians communicate in foreign yet complimentary idiolects, working in pleasing tangent to one another.

Into the feedback drone of ‘Placing Reeds’, Moss splices dim, ululated glottals and soft growls, which quickly unsettle complacency the moment it sets in; in the Massacre-on-valium ruckus of ‘Critical Band’ his guttural hacking rides Strobl’s metallic rattle like a rodeo champ. Much of the album proceeds at a crawl though: Moss obsessing in low tones on the plosive play of ‘touch’ ‘power’ and ‘transformation’ in the two ‘Shoebox No.4’ tracks, his street-savvy delivery weighing anchor in Strobl’s non-committal harmonics, while the whole washes over the mind like hypnotherapy gone wrong. I’ll admit to having heard little of Moss’ work outside of his contributions to No Wave mainstays Material and The Golden Palominoes, and though this work bears comparison, At The Beach is a good deal less jagged and at times quite inviting.