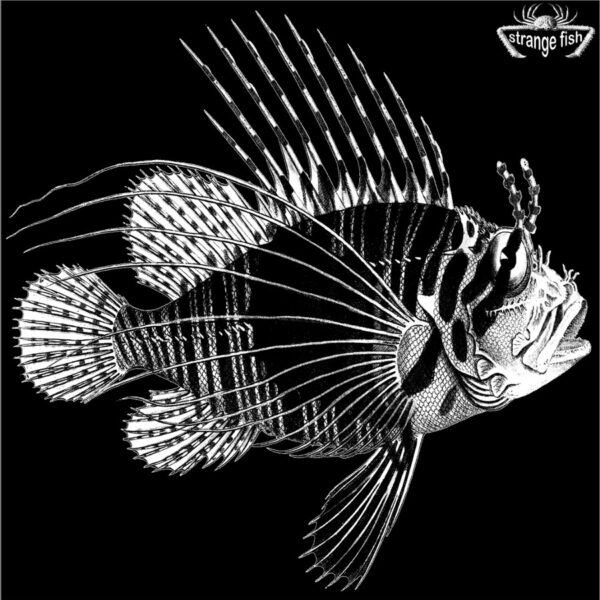 With accompanying graphics showing the more colourful/gnarly denizens of the deep, comes the “Strange Fish” series of compilation L.P.s, which come courtesy of the Fruits de Mer imprint, no doubt spurred on by the success of their “Head Music” and “Roqueting through Space” collections. These four volumes are knee deep in moderne prog moves, ambience, cosmostronica and beyond and suggest that if you’re a Brain/Ohr camp follower, you’ll be clutching these to your bosom from the very get go. Hmmm, as for the strange fish content, I’d hope that instead of a uniform shoal of herring, I’d get something like the weird symbiotic relationship between consenting Angler fish, where buy blood pressure pills online, after a brief moment of freedom, the teeny, tiny male becomes fused to the big ole head of the missus and eventually becomes part of her, relying on her for all the everyday bodily functions. So…something alien and outlandish is what I crave in strange fish…with bio-luminescence even!

So being presented with the entire recorded oeuvre of this project, it shouldn’t be unreasonable to think that as there’s forty-one tracks on offer, there should be plenty of scope for enquiring ears. Well…erm…the batting average doesn’t work out too badly, though I will admit to not going cock-a-hoop over the prospect of dipping a toe or two into ‘ambience’. Sanding down and rounding off the potential sharp edges of electronica smacks of some nutzoid health and safety initiative – designed for an oversafe/sanitized world. Brian Eno, what have you wrought with your One Brain?? (anag).

So onto the opening volume then and the it’s the least populated of the quartet with only two names on show, namely American synthesist Craig Padilla and Welsh space-progsters Sendelica. The former’s “Secret Language” and “Full Moon World” (initially used as a meditation soundtrack!), are expanded Arp-generated modulations that would certainly bring a roseate glow to the features of Edgar Froese. The latter’s “Strange Fish” finds a pot head pixie lurking in the back row of the annual end of term photo, holding well worn copies of “Angels Egg” and Nektar’s “Journey to the Centre of the Eye” under his spindly green arm.

Volume the second veers towards more conventional, nuts and bolts compositions, with a lion’s share centreing on the machinations of Russian prog. Vespero‘s “Red Machine” is an effective mix of extended far eastern six-string themes and wayward sequential squelch. The quasi-symphonics of Organic is Orgasmic‘s “At Dawn of Men” are brought down to earth with a resounding crash by a completely incongruous Kenny G-informed sax filligree. While The Grand Astoria rev up the ante a notch, energy-wise, with Coral electric sitar(?) attachments and fits snugly into the pantheon of worthy Russian progressives such as Gorizont and Sepsis.

For me, the penultimate volume is the most fully rounded segment. “The Vampire’s Kiss” suite from Fleetwood, Lancs’ favourite sons The Earthling Society is an immediate pleasure. The opening theme could so very easily grace the opening captions of an early seventies slice of weird t.v. like “Penda’s Fen” or “Escape into Night” The eventual nightmarish world of disembodied voices/found sound and murky throb reminding me of the spooky doings of Fish from Tahiti, whose black magicked audio was captured on the Sorted label some time back. Still with the U.K., and coming out of nowhere central, the very, very shadowy Vert:x. Their monomaniacal riff bluster on “Bad Calibration” and “Killer Beez” opens up a neon flickerbook of images crafted from finest Chrome, Neu and obligatory Hawkwind. Cast aside those headphones, turn it up and make those speakers vibrate! Other highpoints come from the Dead Pylons catalogue. This Hi-Fi Science offshoot occupy the darker facets of obscurist electonix with the Kluster-like “Osiris” being the very best pick of the bunch.

So as most of F.D.M’s produce sells out p.d.q. via the jungle telegraph and zine ads, their bread’s pretty much buttered at the mo’ Still, if they can put out a Simones’ seven incher, keep ambience levels low and introduce me to the joys of Vert:x and The Earthling Society, good luck to ’em says I.