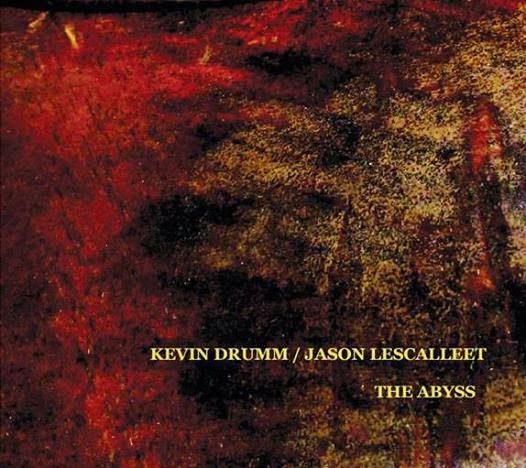 I’ve not kept up much with the activities of Kevin Drumm and Erstwhile Records over the past several years so coming across this double set with Jason Lescalleet in collaboration has enabled me to right a serious wrong against Drumm and assures me the guitarist is active and committed to pushing himself as a musician and creative artist. With guitar, piano, electronic instruments and tapes as his tools of the trade, Drumm plunges headlong into a sprawling audio universe of mystery and bottomless depths. Lescalleet brings along his organ, computers, other tapes and various objects and together the two men explore a vast sound terrain. They discover an astonishing if at times fragile tapestry of various textures and tones against a background of unlimited dark space. The whole work could have been very earnest and full of itself but with Drumm making up half the flight crew, humour is not in short supply and stops our journey from crashing deep in the … well, I guess the work is called “The Abyss” for some reason?

For some odd reason the first six tracks of Disc 1 pass very quickly even though these are not short pieces and some exceed the 10-minute mark. There is surprisingly busy activity and listeners must be able to stay the pace with Drumm and Lescalleet. The music can be deranged at times: a case in point is the early part of Track 3 in which a delirious acid-toned toy piano melody, burning the air with a frying crumble sound effect, spirals into the far distance. (The whole track itself brims and hums away with a secret madness.) Track 4 gives the appearance of a daemon-possessed mechanical clock furiously burning up its gears and screws in an effort to erase its unwanted prisoner. Generally lively, the first disc keeps the listener quite enthralled with the possibilities that all the sound and melody fragments conjure up and follow, at least until we reach the marathon title piece.

And what an immense track “The Abyss” is too, running for just over half an hour, and quite forbidding and broody it is. It’s rather less original and sharp than preceding tracks – it’s the kind of formless cloudy ambient soundscape that wouldn’t be out of place on most self-respecting depressive black metal recordings – with an emphasis on building up and sustaining an ominous though never very malevolent mood. That there is some excellent and intense dark mood music here is undeniable but it seems to be the sort of thing you’d expect on a track called “The Abyss” and I am a bit surprised that Drumm and Lescalleet do not do much more with the sounds they create. Altogether this lengthy piece is something of an anti-climax.

Disc 2, consisting of just one long track “The Echo of Your Past”, is a return to form – well, a quiet return anyway – with a combination of sharp digital sound, piercing drone and more cloudy ambient music. Again, there are some great soundscapes in this work, especially about the 12th minute when a ringing vibrating drone sets up shop and warbles on and on, eventually to unfurl itself into a radiant ringing sun that lights up and dominates the track just before the 20th minute. The track then drops into formless nothingness, from which a new sound universe might be born. Sure enough from the very deepest and darkest bowels of the cosmos, a rumble starts up and things start to groan and move into their allotted places in the newly burgeoning yet invisible hierarchy of cosmic building blocks.

The double set is a very creditable work for both musicians and Erstwhile Records. In the past I wasn’t greatly enamoured of this label – it had the habit of releasing just about every recording of improv music on CD, irrespective of the actual quality of the music – but it may now be exercising some quality control (I hope) if this record is anything to come by.