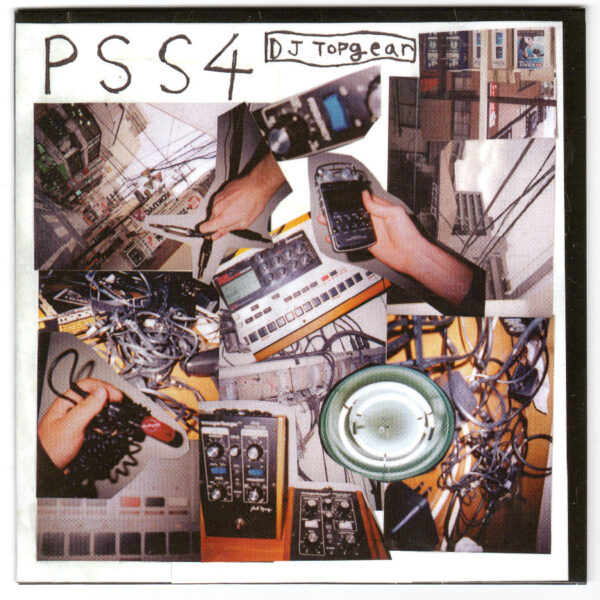 Following on from their release by oMMM (which was sent here at the same time) the bizarre London label Adaadat has sent us another marginal and thrilling example of DJ culture going insane. The record PSS4 (ADAADAT ADA0029) by DJ Topgear – i.e. Simon Petre – is a sprawling rag-bag of far-out ideas, executed using a radical, splurgy approach to editing and mixology methods. Samples, field recordings, illogical electronic sounds, strange noise, and extremely randomised beats are piled up in exciting disarray on each of these 12 experimental tracks. It’s as though the creator were a voracious monster attempting to consume as much information from the 21st century as possible, with all parts of its body called into play – teeth, stomach, eyeballs, claws and tongue. If our culture suffers any damage under this gluttonous and omnivorous assault, then so be it. Topgear sometimes can’t escape the restrictions of the bedroom experiment, but the occasional touches of clunkiness on this album add considerably to the combined effect, and when he unleashes his imaginative spirit into the wi-fi equipped shopping malls of Canary Wharf, you can be sure the sparks will fly and ignite many a pile of over-priced tat in that obscene monument to consumerism. Some listeners appear to find this work rather bleak, but on the contrary – there is a savage glee in his eyes as he sets about his work with fiery passion, usually yielding maximal results. Simon Petre is also known as Auaua and Onthema, and used to be one half of Wang Wang Gou. The first two releases in this PSS series were released by Animal Fact Records, but good luck finding volume 3 – it was only ever out as a very limited cassette and given to friends.

A rich mish-mash of audio surprises is Borderline (EH? 78), an hour-long sprawl of tape edits assembled by Milwaukee’s Neil Gravander appearing here as Lucky Bone. He’s sewn together recordings from multiple sources, including found tapes, field recordings, live tapes of rock musicians and bands, and answering machine tapes purchased from charity shops. There are probably extensive treatments going on too, because what reaches our ears is quite often a delirious jumble of noise, distortion, repetition and looping effects. Fragments of “real life”, in the shape of documentary field recordings, leak into this fascinating and sometimes overwhelming maelstrom; they are no less strange or other-worldly than the extreme tape treatments that Gravander is constructing, and the listener needs to be prepared for a very strange journey through many surrealist corners and side-roads of the American landscape. The work is structured as four parts, each described in allusive prose by the creator writing with the associative brio of an early Jack Kerouac. Perhaps unsurprisingly, Gravander is also an experimental film-maker, and while I haven’t yet ventured to experience the delights of his cinematic craft, numerous examples can be found posted on Vimeo. From 19 February 2014.

Some very imaginative and textured, dynamic electronic noise-whatsis from the Italian creator SEC_. His Outflow (dEN RECORDS 017 / HEART & CROSSBONE HCB052) was generated using the full frying pan of now-familiar methods – tape recorder, feedback, radio signals, field recordings, contact mics, synths, etc – but the outputs are tightly composed and assembled, enabling him to serve up a tremendous wallop at the business end. His highly abstracted sounds may run wild and crazy when he lets them go free, but he’s in total control at all times, and he can pull in 13 errant barking dogs with just a single tug on his mechanical leash. Each track is a fascinating assemblage of layers, all competing for oxygen inside a tight, compacted space; SEC_’s editing skills are merciless, always knowing precisely where to let the blade fall. Fans of Miguel Garcia’s brooding night-bloomers are invited to check in here immediately, but whereas Garcia likes to let his surly, ugly sounds go for an extended rampage around the garden to terrify whom they may, SEC_ is all about measured control, economy, tautness, and selection. Every second counts in his no-nonsense, monochrome world. This is the fifth solo record from SEC_, who is Mimmo Napolitano from Casamarciano. Beautiful fold-out package printed silver on black. Arrived March 2014.