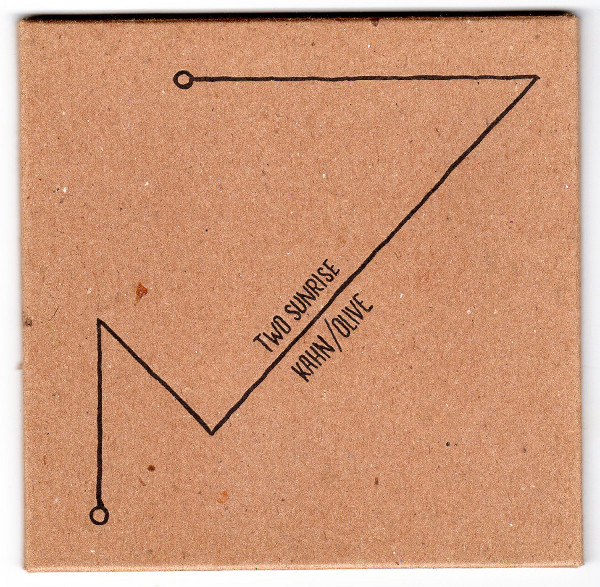 Tim Olive continues his fruitful collaborations with friendly musicians from around the globe. This time it’s percussionist / composer / electronicist Jason Kahn who has dared to enter the charmed circle which Olive has drawn around his his mysterious dwelling in Kobe, Japan, where the crickets vibrate their raggedy legs by day and the black skeletal ghosts whistle into his ears by night. The music on Two Sunrise (845 AUDIO 845-3) was produced by means as basic as you could want from a performance set-up, and Kahn is simply credited with analogue electronics while Olive is playing his “one-string magnetic pickup device”, an ungainly lump of metal and DIY soldering which is hopefully the exact opposite of today’s showroom electronic instruments, with their cute names like “El Bruto” and their colourful finish. On the three studio pieces recorded in 2012, the duo present an experience not unlike a phantom radio station which is broadcasting signals from Planet Metallo, an as-yet-undiscovered sphere in the cosmos which is populated by odd-looking men made of zinc who evidently spend most of their time dragging recycled office desks from one corner of the room to another. At the end of each take, the irrepressible Kahn would whoop “That’s gotta be the one, hasn’t it?” in honour of his all-time hero, John Bonham. “Well, that’s three tracks laid down for the album, man,” roared back Olive as he reached for another can of Asahi Durian juice, “what say we hit the road and play live someplace? The punters in Osaka will pay big Yen for this stuff!” Sure enough, nine days later the duo found themselves playing their inimitable abstract squeal-fest at an event in Osaka, and the results are captured and printed here: already an audibly more confident and assured performance from both, and characterised by many exciting textures and wild bursts of controlled noise. As ever with anything where Olive is involved, there’s a genuine sense that the music is being explored and invented in real time, rather than professional improvisers simply trotting out their well-worn tics and phrases. Basic chipboard package with artwork by Marc Bell, the Canadian avant-garde cartoonist. From 27 March 2014. Fab!