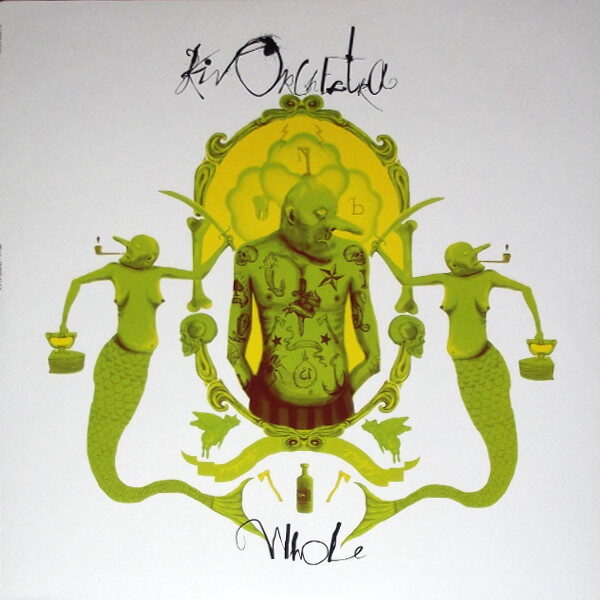 The Kiv Orchestra sees the inspired team-up of two bands, both of them already highly unusual and well-established in furrowing their own particular grooves of madness. Vialka is the French duo of Marylise Frecheville (here appearing as “FrenchEvil”) and Eric Boros, while the ensemble Kruzenshtern I Parohod are the unclassifiable Israelis 1 who play a species of traditional Klezmer music mashed up with energetic hardcore rock, under the leadership of principal bassist, singer and all-round loon Igor Krutogolov, who also did the artworks of the naked green boxing goblin. While Kiv Orchestra’s previous outing seemed a little incoherent to Hannah Giles 2, this 2013 LP has found the right groove for the current listener, and it comes out blasting like a mad species of European circus-jazz, accordions and clarinets rubbing up against electric guitars while cheerfully owning up to all its influences taken from cabaret, Chanson, tango music, and “traditional Russian prisoners’ songs” – the latter being a sub-genre which has strangely passed us by. The tri-lingual lyrics (French, English, Russian) sweep the listener through a kaleidoscopic vision of an imaginary between-the-wars Europe that’s like an unholy mix of all the bad cinematic dreams of Eisenstein, Rene Clair, Orson Welles and Alexander Korda all tied up in a bag with eighteen cats, while some of the grand guignol lyrics surpass Nick Cave with their matter-of-fact bloodthirstiness and geelful implied violence. The arrangements may seem as ramshackle as something played by a Tom Waits pick-up band, but are in fact watertight concoctions allowing all players to exhibit their “black humour and tough punk attitude”, and two of the vocalists really shine forth – the excellent Marylise who seems as wound up as a Dayglo version of Edith Piaf with her sardonic Chanson parodies, and Alexander Liver, whose near-comic baritone is the centrepiece of the Russian song ‘Maki’. It’s exhausting, but great fun. Curious listeners may wish to investigate as far back as their 2006 split LP. This arrived 21 August 2013 and is pressed in yellow-ish vinyl, the colour of nasty medicine. 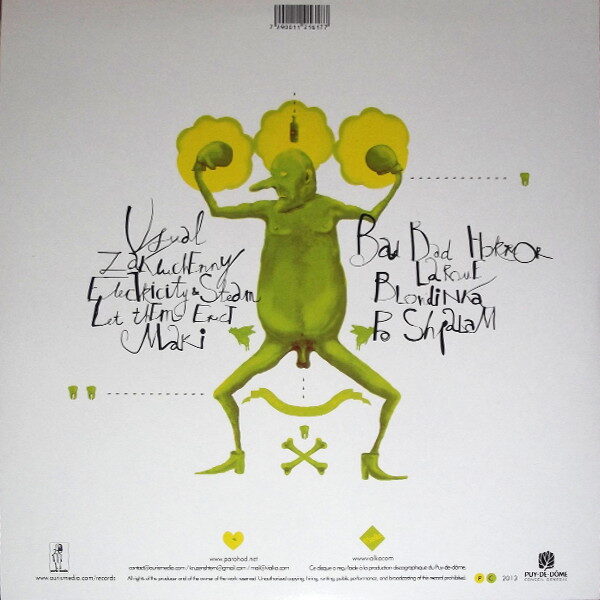