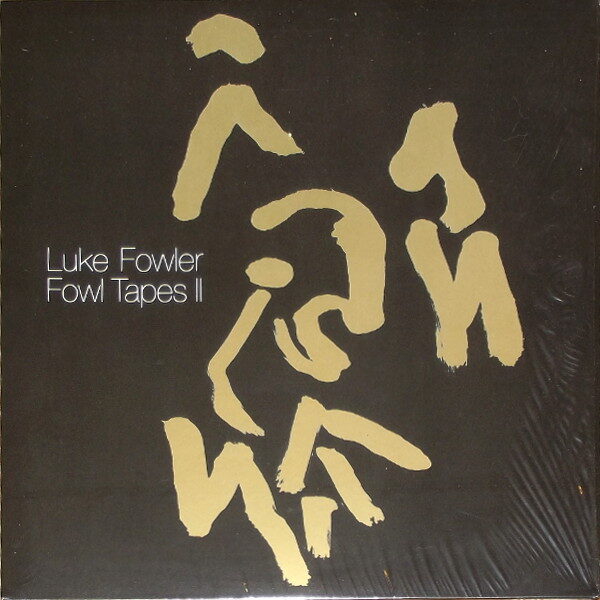 Very nice vinyl LP of electronic music by Luke Fowler, the Glaswegian musician, visual artist and film-maker whose unclassifiable and very diverse activities have a special place for us…as one quarter of Lied Music, for example, and his 2010 EP as one third of Rude Pravo. Plus he operates the small but select Shadazz label. It’s never easy to pigeon-hole his work, and each statement seems to be coming into the world at a completely different angle, enthusiastically pursuing new concerns, and revising former ideas. Fowl Tapes II (DEKORDER 068) is no exception. It represents Fowler’s attempts to come to terms with a Serge synthesizer, an instrument (some would call it a “beast”) he got his mitts on during a residency at Bard College in New York state. The Serge is an all-analogue monster, was the weapon of choice for Malcolm Cecil and John Adams, and it chews up little boys for breakfast; I have the feeling that it has refused to go the route of the Moog, for example, and to this day it’s neither as commercial or as portable as any of its rivals. The intuitive, give-us-a-go self-taught Fowler couldn’t resist the challenge of getting his jackplugs stuck in to this modular ogre, as the Serge is the sort of device which requires no special skills in the way of programming (and more importantly no keyboard playing ability) in order to create and manipulate sound.

What we hear on the record though is not exactly the raw sound of Fowler experimenting wildly, so much as edited highlights derived from a large backlog of recordings, produced over many years and amounting to several hundreds of hours of aggregated noise. The editing was done by Richard Youngs, the talented all-rounder of droney art music who made the double LP Lake in 1990 (with Simon Wickham-Smith), and who could perhaps be accounted more self-consciously “musical” than his compadre Luke. He not only compressed down a vast amount of sound to one LP’s worth of music, but also added some extra keyboards; as did Luke himself, if the credit roster on the finished item is correct. The press notes enthuse over “obsolete digital synths, drum computers and homemade organic oscillators”, a shopping list which may lead the listener to expect a richly layered or over-saturated sound. In fact, Fowl Tapes II makes it through the production process with Fowler’s innocence intact, and the improvisational impulses that produced these strange tones has been faithfully preserved. My personal preference is for the “Gold Side”, which sounds like someone trying to copy the music from an early Kraftwerk LP by simply looking at the LP cover – or more precisely, a picture of the factory where the LPs were manufactured. Or even a blueprint for said factory, with all the specifications printed in German. It’s that very real sense of attempting (attempting very hard) to understand concepts and languages that are alien. The “Black side” is also pretty good, but seems to be making more concessions in the area of beats, rhythms, and melodies. At any rate I like it much better than The Lurists’ “disco” record, also on this same label, which is the team-up of Fowler and Youngs with Steven Warwick of Heatsick fame.