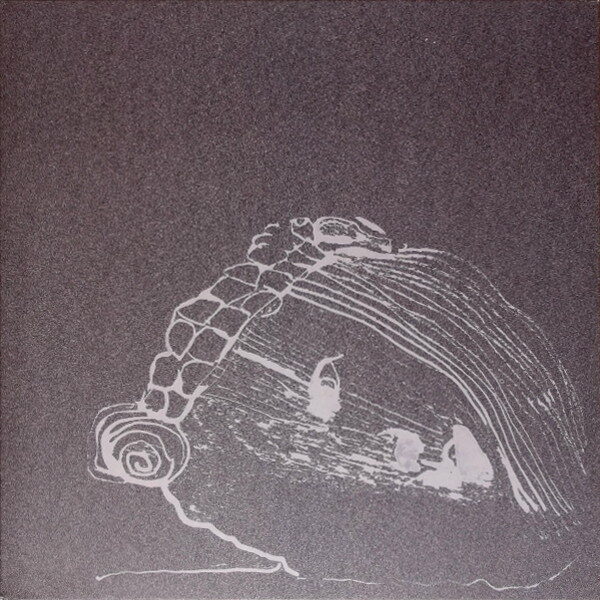 Another superbly bleak record from Yek Koo, following on from 2012’s Love Song for The Dead C. The new album Desolation Peak (EMERALD COCOON EC011) arrived here 3rd December 2013, and it’s a harrowing piece of art music made with voice, heavy guitar, feedback, and percussion, hopefully all-metal and scraped with daggers rather than violin bows. Helga Fassonaki enacts ritualistic psycho-dramas, trudging slowly through abstract mind-scapes and dragging behind her a ball and chain on each foot, plus a weighty burden on her back representing the sins and miseries of all mankind. This release is less “fragile” than the 2012 album, and it’s as though Helga has managed to give her music (especially her guitar playing) more weight and iron, without sacrificing the subtleties that mark her best work. The voice is one of the strongest elements; forlorn plaints, hideous doomed wails and anguished sobs that you’d need a heart of stone to remain untouched. As to the guitar work, it’s unpredictable to the max; she does her best to avoid formulaic repetition and resists any temptation to lapse into mindless strumming. Any given average stoner rock band would thus be defeated in short order by this imaginative creator’s impulses, as each recorded statement is largely unpredictable. But that isn’t to say she’s afraid of monotony, when it suits the mood and purpose of the song; no wonder the press notes refer us to “East African ritual chants” in an attempt to nail down the “haunted” and compulsive vibes of Yek Koo. Indeed, she does seem possessed of multiple ghosts and unpleasant memories on this outing, such that the whole of Desolation Peak serves as a personal exorcism for its creator, a cleansing rite, where only the last track with its bracingly crisp guitar strums indicates that the purging has succeeded, or offers any degree of hope. Helga also did the cover art, an expressive ink drawing that looks like the head of a bronze statue of a Goddess, sawn off and lying abandoned in some Mediterranean shore of ancient times. 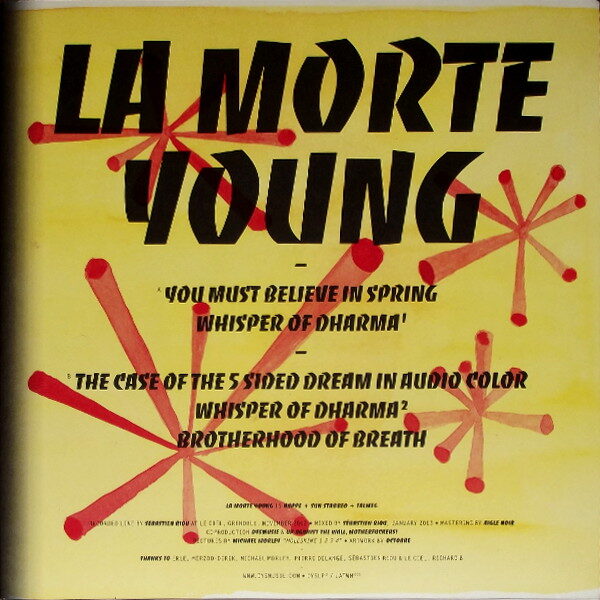 Malevolent, turgid guitar art-rock from La Morte Young on their eponymous album (DYSMUSIE 002 / UP AGAINST THE WALL MOTHERFUCKERS! UATWM 005), which we’ve had here lingering on the vinyl casements since 23rd December 2013. The band are a hideous amalgamation – given the music, one might say a Frankensteinian monstrosity – of three French bands, to wit Nappe, Talweg, and Sun Stabbed, all of them operating more or less in the area of grim guitar drone or Black Metal-ish diabolerie. Sun Stabbed from Grenoble are the only ones I’ve heard of, and I still reckon their album for Doubtful Sounds is worthy of your investigation. On these 2012 live recordings, the band literally crawl their across the first side, most of which is occupied by the long track ‘You Must Believe In Spring’, with a nauseating mix of over-amped guitars, indigestible feedback, ugly chord shapes, and drumming that belongs at the bottom of the ocean or inside a whale, so ponderous and slow it be. After that point, they receive an injection of adrenaline straight to the heart that enables them to perform the first track on the flip, a stormer which is eccentrically named after a jazz LP by Roland Kirk (all the track titles have their origins in jazz LPs, for some reason), and amounts to a lively assault on the forces of lethargy and torpor, the band springing into action like armoured warriors ready to battle the massed armies of anti-life. Thereafter they follow a course which leads them to the outright anguish of the closing track – called ‘Brotherhood Of Breath’, but there the resemblance to Chris McGregor’s pan-cultural jazz big-band aesthetic ends – where I seem to hear screaming vocals in the midst of an almighty and painful guitar roar. La Morte Young are explicitly paying homage to Michael Morley and Gate / The Dead C, a player now revered as an important innovator in this particular stream of slow and heavy formless and tuneless rock noise. They’ve even commissioned said Morley to provide the cover art, with its cosmic and hieratic flower-star shapes hinting at a distant cosmos, where (judging by the lumbering music) each planet in the solar system has a gravitational pull that exceeds a million Jupiters. I should add that La Morte Young don’t wallow in misery, and clearly use this form of music to purge themselves of despair. As such, it’s potentially a very healthy listen. It’s also distinctly European somewhere, just ever so slightly intellectualised and over-thought, regardless of how many Sonic Youth namechecks the label may make on their behalf. Not bad at all. A co-production between two labels, with press notes provided by the curiously-named Merzbo-Derek. Has since been reissued on cassette by Ba Da Bing! in the US.