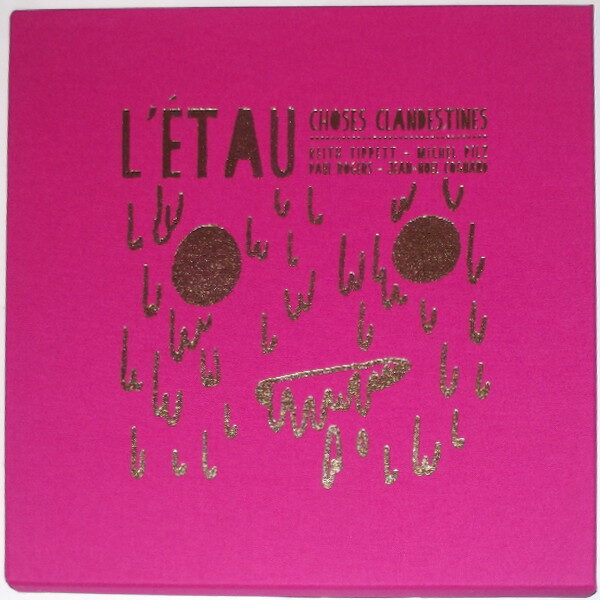 Here’s Choses Clandestines (BLOC THYRISTORS 0140/50/60/70), a superb and lavish four-LP box set of great music kindly sent to us by Jean-Noel Cognard, the French drummer who now plays in multiple free-jazz and improvising contexts, but also had I think an art-rock prog drumming background in the late 1970s. Notice it’s on the Bloc Thyristors label. Time was we used to receive quite a few limited edition items on this label with their screenprinted covers and exciting combinations of jazz, improv, avant-rock and electronic noise [1. Not sure however where you can buy their product any more, since Bimbo Tower in Paris closed down.]. Chose Clandestines is not quite in the same line, by which I mean it’s not striving to stake its claim as a genre-expanding statement of noisy weirdness, and instead is a beautiful, straight-ahead set of lively and impassioned free jazz, played by a French-Anglo [2. One must include “Welsh” for accuracy, and with respect to Paul Rogers.] quartet of supremo musicians who call themselves L’Étau. It’s a pleasure to hear the great Keith Tippett again, still playing like a demon with quicksilver fingers which slide across many keys with infinite grace, and treating us to the distinctive sound of his prepared piano with its muffled strings producing a unique and wholesome clank. And there’s his typical music-box hidden inside the lid making its beautiful appearance. Paul Rogers is here playing his seven-string bass and letting fly with the harmonics and graceful picking, such that you’ll wonder at times where they managed to hire such a gifted guitarist. Michel Pilz, who we have heard on other releases on this label, has his bass clarinet which passes through several Dolphy and Coltrane tributes as he treats us to many unhinged honking blasts (and some sweeter melodic passages too). Drummer Cognard completes the quartet. There are two sides of studio recordings from 2013 which show the band trying out various duo-trio-quartet combinations as the need arises, producing 11 superb tracks of crisp, lively and mysterious jazz across two sides. These are just great, but the live sides (pressed in white vinyl!) are even better. Recorded the same day as some of the studio session at Instants Chavires in Montreuil, these two long pieces are superb exercises in warmth, communication, dynamics, team-work, co-operation – all the things you could hope for from this music, and also indicative of the tireless energy of the foursome, who never stop giving it their all for a single moment. Beautiful recording quality throughout too; the live sides in particular just crackle with sheer energy. Believe me, you’ll want to play the whole thing in one sitting – it’s addictive listening. Limited to 300 copies and very nicely presented, this is an essential piece of gorgeous music.