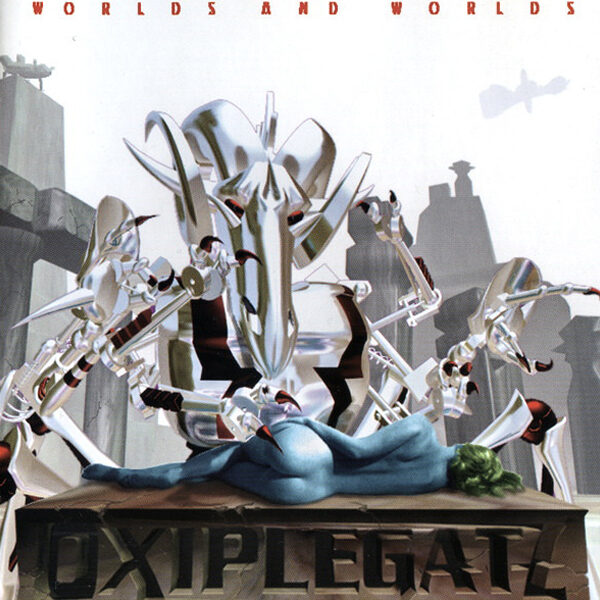 I can only shudder at whatever possessed the Ormolycka label to reissue these two late-1990s albums by the Swedish one-man BM space opera act Oxiplegatz: a sure sense of the sublimely ridiculous and the ridiculously sublime must have played a huge part in the decision to re-release them. Oxiplegatz was headed by one space captain Alf Svensson who played all the instruments on both albums with help from his co-pilot / girlfriend / wife Sara.

When Ormolycka reissued these albums, the original sci-fi erotica artwork was included in the repackaging but minor fussy and obviously unnecessary details like the number of songs, the song titles and the names of the musicians, what they played and on which tracks were, uh, left out so I’ve treated both recordings as continuous works for this review. No matter – at least y’all get to read a holistically oriented review as opposed to a blow-by-bombastic-blow account. Generally the music is a madcap mix of speedy blast-beat programmed drumming, heavy rocking post-BM guitars, massive droning-hornet synthesisers, blaring synth brass horns and all the other demented accoutrements that keyboard-generated faux orchestras can offer, along with an array of vocal styles that slip back and forwards from black metal rasp to guttural death metal to girlie pop to mellow male lounge lizard crooning to Z-grade hit-n-miss operatic without warning or good reason as to why such styles of singing should appear when they do. Songs lurch about from one gritty power metal guitar riff or ersatz classical music melody to the next and one vocal style to the next – the album isn’t clear as to why Ms Svensson had to be roped in to sing since there are no duets in which male and female voices play protagonist and antagonist – so both albums come across as an overwhelming mess of loony pulp sci-fi fiction inspiration and pyrotechnical theatrics about extended voyages in outer space.

At least Alf Svensson is consistent as an all-round musician, composer and arranger: his skills in playing different musical genres across a broad range of instruments and studio recording equipment is top-notch, and his ability to co-ordinate the varying styles of black metal, death metal, power metal, hard rock, synth cheese, girlie pop, tuxedo’ed trilling and B-grade sci-fi soundtrack music into one flowing whole are so extraordinary as to be unbelievable, at least until you hear one of the albums.

“Sidereal Journey”, the later album, is a sonic improvement over “Worlds and Worlds”: with loads of black metal and death metal on offer plus moments of space ambient, the album has some genuine moments of creepy fear here and there. The more or less continuous musical landscape tapestry, stitched together from 30+ songs of 1-minute or so duration, has natural musical hills and dales galore (or peaks and troughs if you prefer) where you would expect to find them. Again the vocals are a hilarious mash-up of grim BM, gurgly DM and Eighties poodle-rock siren singing – though here the songs are starting to make some demands on Ms Svensson’s vocal range. A feature that was not present on “Worlds and Worlds” is Alf Svensson’s discovery of the vocoder to modify some of his clean baritone singing: this lifts the album to an even more hilarious level.

As with “Worlds and Worlds”, the music on “Sidereal Journey” is well done with some virtuoso lead guitar soloing and a heart-felt sense of drama that makes the whole insane excursion credible. Doomy moments add majesty to the kitsch space musical and space ambient effects bring slight shivers to the spine and a sense that not all here is cheddar cheesiness. While the Svenssons – they should have renamed themselves the Jetsons in honour of the old 1960s cartoon series about a family living in outer space – don’t take their abilities or their creation all that seriously, their earnest and straight-faced delivery and the album’s production save the Oxiplegatz starship enterprise from falling into a black hole.

What ultimately saves this double set from falling into outright kitsch bombast turns out to be a great deal: large injections of blackened DM impose some discipline as does a minimal and clean production. The Jetsons … oops, the Svenssons do not take themselves or their subject matter of Earthlings questing among the stars like Vikings in jet-packs, finding other planets to colonise, too seriously. There might be a satirical dig here at narratives (be they literary, cinematic or real life) of colonial conquest and subjugation of the aboriginals of conquered territories, and of the language, symbols and musics that accompany such narratives and mythologies.

Fun though these bizarre and deranged recordings are – “Sidereal Journey” just pips its predecessor as the better album as the music is even more fruitcake fey in its ambitions – there’s probably only so much of this kitsch space power metal opera symphonica a sane human can stomach and it’s perhaps no surprise that after these albums and a much earlier one, the Oxiplegatz crew hung up their alarmingly snug form-fitting space-suits, fish-bowl helmets and laser guns for good.

(PS: I think I may have spoken too soon as Alf Svensson is currently planning a fourth major opus with a stronger fantasy bent and a focus on classical music.)