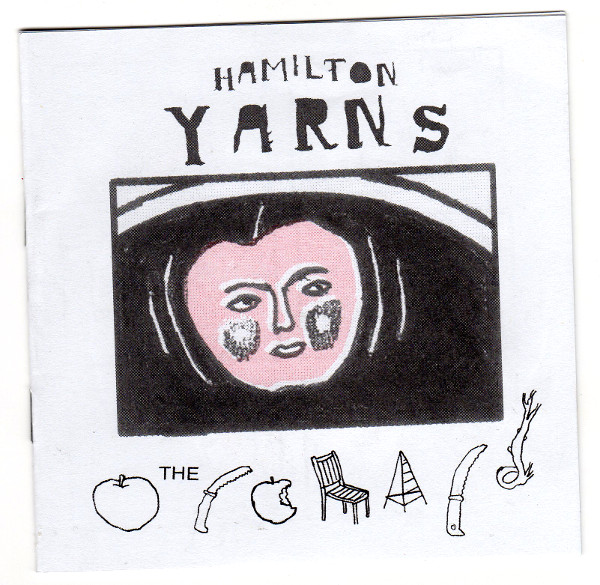 The Brighton combo Hamilton Yarns have never failed yet to please us here at TSP with their fey and whimsical music and songs. No songs as such on their new album The Orchard (HARK! 022), which is largely an acoustic instrumental suite with just a few fragments of verse couplets to hold together the fragmentary and impressionistic story. Said story is outlined in pictures rather than music, and is told in picture-book / comic strip style in the enclosed booklet; it certainly features apples in an orchard, but also church bells and hand bells, and may end with a vague allegory riffing on the Garden of Eden story. This reluctance of theirs – one might almost call it a shyness – to commit to anything concrete may infuriate some, but it’s all part of their innate charm. The musical plan here was to record Alistair Strachan’s and Iain Paxon’s piano parts first (they play as solemnly as any 19th century maiden in a cold Victorian parlour), and send these pre-recorded sections out to the other collaborating musicians, who added fragments, ideas, suggestions, and impressions of their own – sometimes using acoustic instruments, sometimes maybe simply writing down a possible direction for the music to take. “We threw it all together like a collage,” claims Paxon, “and moved it around until it sounded right”. Excellent. This kind of direct simplicity and hands-on spontaneity in making records is just what we need in this country. Both Bowie and Eno would approve, I’m sure, and you can bet that Hamilton Yarns have every single Eno record in their collection too. The collage method worked, and if The Orchard may appear ramshackle at times, in fact it’s all been carefully arranged and pared down; what appear to be fleeting happy accidents are actually orchestrated passages of music. The abiding air of wistfulness and meandering on a misty summer’s day give this album its patina of English nostalgia. Very nice. Arrived 10 April 2014.

We’ve had a couple of nice examples of contemporary Japanese electro-pop from the Noble Label in the past, including records by Motoomi Doi and the excellent Babi. I’m not so immediately impressed by Reliq with his Metatropics (NOBLE NBL-211) album, which arrived here in April 2014. Reliq made a few releases as Serph before morphing into this new alter-ego, under which he also released Minority Report for the label in 2011. He’s certainly a whizz at programming. Synths and drum machines are doing things on this record you would not have thought possible, and doing so at quite remarkable speeds too, often interspersed with unusual sound effects and samples. While this is impressive, it’s also hard to follow. What Reliq lacks is a strong sense of how to organise his materials into a coherent structure, with the result that each tune keeps changing its mode and theme almost as frequently as a bored tourist in Tokyo flicking channels on the Sony TV in his hotel room. The other drawback I find is Reliq’s predilection for very processed and “tasteful” sounds, so that each track starts to sound like a parody of 15 TV commercials all happening at once. The slickness and blandness of these synths does start to become rather nauseating.

Roland P. Young clearly has found a niche for his catalogue at EM Records; they reissued his 1980 trippy free jazz masterpiece, Isophonic Boogie Woogie, which has been such a success that there have been two vinyl represses of it. While we quite liked his Istet Serenade from 2009, I find that 2013’s Mystiphonic (EM RECORDS EM1110LP) disappoints; while it still displays great technical proficiency with the echoplex and other effects on the trumpet, the overall sound is just too smooth and easy-listening for me. Many of the backing tracks are just identikit ambient dub, inflected with dubious “ethnic” flavourings. This is not to denigrate Young’s important history or his place as an advocate of Afro-centric underground music in the 1970s, and Mystiphonic is not an unpleasant listen, still perhaps providing some solace as “meditative” music.