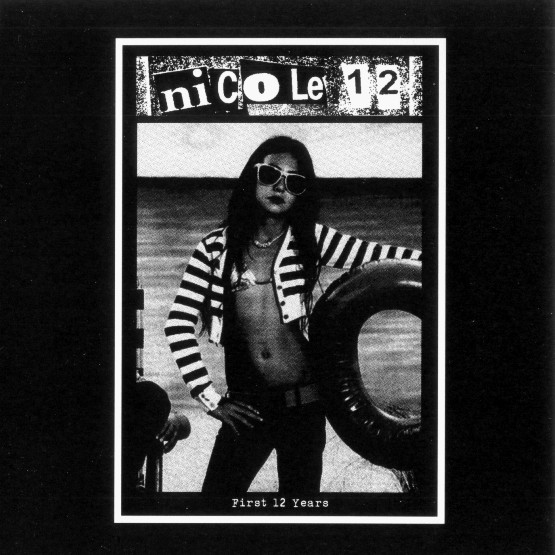 Nicole 12 is the industrial / noise project of Finnish musician Mikko Aspa who is currently serving his tour of duty as vocalist for French black metallers Deathspell Omega and his own BM project Clandestine Blaze. He also runs two record labels, Northern Heritage for black metal and Freak Animal for the power electronics and noise. In-between those and all the other things he gets up to like training for all the major Alpine and Nordic ski events at the next Winter Olympics and building a fleet of buses for his home town from scratch, Aspa publishes a pornographic magazine and a pornographic video series. This double set compilation celebrates the 12 years of Aspa’s noise project Nicole 12 by gathering all the non-album tracks recorded on splits and various-artist compilations made under that name from 1999 to 2011. The project’s aim may be to criticise Western contemporary society’s fascination / repulsion regarding the sexualisation and subsequent commodification of pre-adolescent youth and the objects and symbols associated with that packaging for direct and indirect profit

The music has a mostly serene character with little of the confrontational approach associated with Whitehouse. Highly rhythmic and quite minimalist, the sounds coolly go on their way. They are possessed of a dark nature whose secrets run very deep. Fans of Merzbow and Whitehouse would feel at home with this restrained lava-like flowing creature alone, if they were not to bother checking out its inspirations and just shut out the lyrical content which is clearly very disturbing. Some of the vocals that do appear are reminiscent of US noisician Dominik Fernow’s work with Prurient and Ash Pool and indeed Nicole 12 was a major influence on early Prurient discography.

Listeners expecting shock and hyperventilation might be in for a surprise: the music often expresses longing, romantic dreaminess and wistfulness perhaps as preludes to seduction leading to manipulation and exploitation. Tracks have a repetitive quality bordering on compulsion, obsessiveness and eventually boredom; the actual sound on some of the pieces, amplified by reverb, sometimes verges on viciousness and can be unbearable. There is sometimes the sense of someone feeling a bit conflicted and tortured by fantasies entertained about precocious pre-teen children that keep churning through the mind. The second disc in the collection features found recordings of girly-pop songs set in a context that seems enervated and drained, and this possibly suggests the mood of someone who finds all this Lolita complex titillation tiresome and banal yet can’t tear himself (well it’s usually men who are affected by this problem) away from such obsessions. I’m reminded of Pier Paolo Pasolini’s infamous film “Salo: or the 120 Days of Sodom” in which a group of men, representing the elite of 1940s Italian fascist society, try to sate their sexual appetites by repeatedly abusing a group of teenagers and descending into perversion as they do so: the constant repetition of their actions, increasingly boring and banal, is a theme of the film.

Over two discs of textured work totalling 140 minutes, the pace is steady, steely and unrelenting. The whole shebang feels a bit like a soundtrack to a futuristic dystopian sci-fi flick about a society where anything that moves and breathes, be it organic, inorganic or somewhere in-between, is treated as a purely profit-making commodity: oversell and exploitation, and abuse even, come as naturally as breathing and eating. The kind of human cultivated in such a society is as hollow an automaton as the shiny technology and the squeaky-clean hermetic environments allow and encourage.

An issue about this and other recordings that focus on contemporary society’s obsession with prepubescent sexuality is that they can easily degenerate into a blame-the-victim game in which the victims are both the abuser and the abused without really addressing the political / social / economic contexts, ideologies and institutions that brainwash and push people, however subtly, into such roles. The sexualisation of children begins very early through marketing informed by psychology, even through the gendering of children’s toys and games and the symbolism and messages they convey, and from there the process continues in divers ways all the way through childhood and puberty into adulthood. All this generates profit and wealth for those who benefit from such exploitation of both consumers and obvious child victims, and the cycle continues as long as it yields monetary benefit, whatever the ultimate cost to society and future generations of humans may be.