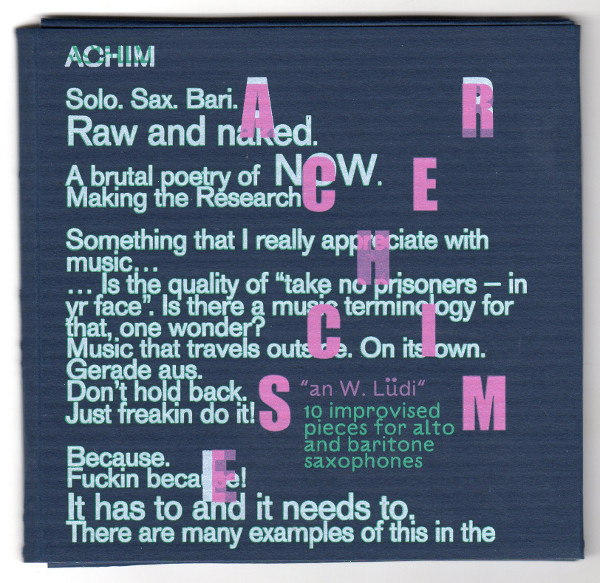 Achim Escher blows a blurtish blast on his solo saxophone album, using the alto and baritone instruments as sirens and foghorns to signal his disaffections…he’s proud of being a rebellious sort, flaunts his issues with authority figures, and sneered at his mum and dad’s “square” record collection before he left home and started causing mayhem with his school dropout hi-jinks, offending all the respectable members of his staid family of “establishment” figures. His album is called an W. Lüdi (VETO-RECORDS 015) as his personal tribute to Werner Lüdi, and it’s released on Christoph Erb’s label. I find that Escher also blew his horn with Manuel Mengis Gruppe 6, as did Christoph Erb, and Flo Stoffner, the far-out guitarist who has also been showcased by Veto Records; Gruppe 6 made a couple of albums for “the” Swiss jazz label, Hat Hut (or at any rate their Hatology offshoot). Escher has also played in Der Grosse Bär, and joined forces with various Swiss, German and American players in his time. As to Werner Lüdi, he was a Swiss sax improviser of a previous time – one might number him among the ranks of first-generation players, seeing as how he did make one album with Peter Brötzmann [1. Wie Das Leben So Spielt, FMP CD 22, 1990.]. “Without personally knowing him,” Achim Escher states about Werner Lüdi, “I always felt a strong sympathy for him.”

However, Escher was born at a different time, and his album just reeks of anger and snarling punk attitude. The track titles for example are short sentences that sound exactly like a youngster “cracking wise” in American slang, such as ‘Thanks for Nothing Asshole’ and ‘Are you that fat one from the airport’. More explicitly aggressive is the liner note written by Mats Gustaffson, the very noisy Swedish sax player who though ten years older than Escher is clearly counted as a kindred spirit. I mention Mats’ notes because they are not unlike the way Achim’s music is performed: short, terse sentences peppered with plenty of four-letter words, bold emphasis, and exclamation marks a-plenty. And a certain chip on the shoulder, as evident from take-it-or-leave-it phrases such as “Because. Fuckin because!” In his bid to widen the net of cultural references, Gustaffson brings in the names of Kaoru Abe, Henry Flynt, and even Charlie Nothing – the latter being a really “hip” name to drop in the game of obscurity one-upmanship (he made one record for John Fahey’s Takoma label in 1967, which is now impossibly rare and collectible [2. The Psychedelic Saxophone Of Charlie Nothing, Takoma C-1015.]). Even the typography is getting in on the act; with its shifting font sizes and diagonal angles, it’s not too far away from a Marinetti manifesto.

Escher’s playing technique is pretty good actually, with lots of wild techniques such as musical grunts, over-blowing, crazy squeals, roars and barks. He even leaves short gaps for thoughtful silences, but it’s usually only a pause before he resumes blowing loud and abrasive phrases. His bravado is admirable, but I also sense he’s trying to call attention to himself with his sheets of noise; there’s a certain pushiness here, which borders on being obnoxious. He makes early Archie Shepp or Clifford Thornton sound positively genteel! Arrived 25 April 2014.