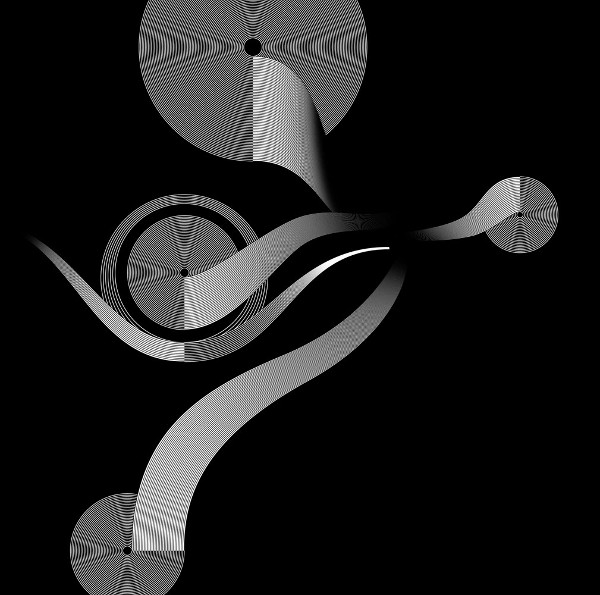 Script Geometry (APOSIOPÈSE 09) is a generous collection of field recordings made by Thomas Tilly, notable for his impressive recordings of water beetles in a castle moat in France in 2009 on Cables & Signs. For this release he did it in French Guiana in the middle of a tropical rain forest, focussing mainly on animal communications – birds, insects, and frogs. But he was also after something less obvious with his powerful microphones, namely “the inaudible that exists in the ultrasonic spectrum”. Accordingly, much of the sound art on this set is dense, intensive studies of continuous low-level sounds, which occasionally break out into alarming, almost alien sounds – clacks, creak, twitters and barks – the eerie language of the animal and insect and avian kingdoms, plotting our downfall as they confer in their secret conspiracies using strange tongues.

Tilly also considers that there is a meaningful bond between nature recordings and electronic music, something he is keen to exploit and explore; it may even go beyond a superficial sonic resemblance. Matter of fact the water beetles on that previous recordings were often mistaken by many listeners for programmed and manipulated digital sounds. It may be our fault. Due to our modern-day conditioning, it seems we urban types can’t help mishearing natural sounds as doorbells, mobile phones, computers or other technology-based objects that we’re more familiar with. What begins as an analogy for Tilly is gradually turning into a methodology, as he describes “taking these sounds out of their context and rearranging them as we would patch cables on a synthesizer.”

Script Geometry isn’t all done that way, though; it in fact contains a very varied mix of untreated field recordings – identified by the creator under the broad term “phonography” – and compositions, where editing and mixing (and sometimes filtering) was allowed. Presumably it is on the compositions, for example the long pieces ‘Crossroads, phasing’ and ‘Crossroads, nodes’, where Tilly is applying his “patch cables on a synthesizer” approach. For the former type, there is a concern with purity and unadulterated content, and he stresses that “no electronic treatment has been added to these recordings other than a low cut filter and a light EQ mix”. In short if you want to hear wildlife performing in ways that are almost indistinguishable from synthesised electronic music, then this is the record for you.

Also noteworthy is Mélanie Bourgoin‘s artwork. It’s possible to read the image as a stylised bird’s head, dipping its beak into a stylised stream. But the shapes also resemble reels of magnetic tape, and the concentric circles recall the grooves of a vinyl record. She probably used computer-assisted drawing to achieve this high degree of geometric precision, but I would say it’s rare that we get a cover image that’s in such direct sympathy with the album, interpreting and iluminating it appropriately. Arrived 28 April 2014; available as a double-LP or CD set. Further information about the whole project here.