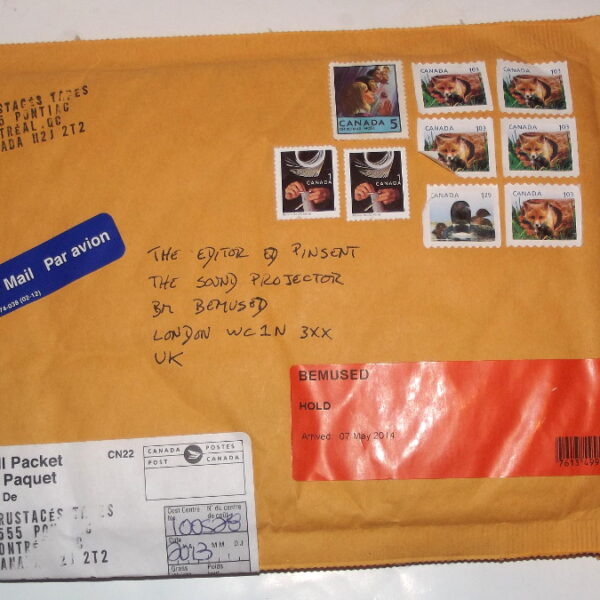 “28 Minutes of Snails on Tape” is the headline / unique selling point of Xeroptica Derbentina (CRUSTACÉS #5), a cassette tape created by Pom Bouvier B. and released on Crustacés Tapes out of Montreal. And that’s exactly what you get on Side A. The crunchy abstract noise here could easily be mistaken for very loud static, or a very crackly vinyl record; but apparently it’s produced by snails. It’s rather ominous. Are they slowly eating their way through the vegetation of the world, starting with a local cabbage patch? What mostly comes across is the way that individual snails lose their identity in the mob and become a single creeping morass, so you get this sense of a blind force, bent on forward movement and continually fuelling itself through its remorseless progress, no matter how slow that progress may be. I for one have never trusted snails, and this tape confirms my suspicion that they’re up to something.

Flip over the tape to hear a composition prepared by Pom Bouvier B. based on his own field recordings of the snails. That crackling noise now sounds like a fireplace with burning logs, or a furnace, or an oven. To put it another way, those snails are now being roasted in the French way, perhaps with garlic and white wine, to prepare a fine dish for human consumption. That’ll teach those scheming little gastropods. I gather they’re not even highly regarded in the world of slugs and molluscs, prancing around in their hoity-toity manner with their fancy shells on their backs. Bouvier’s composition isn’t as loud as the A side (he’s done something to silence their munching noise), but it is far more progressive, and his transformations result in a fairly compelling episode of mysterious, minimal sound art, and one that remains very true to its sources. I wondered if any other artists have managed to create fine art out of these humble creatures? Well, it turns out that Professor Steve Jones of Gresham has made a study into the subject, and you can see a video and read a transcript of his Feb 2014 lecture at the University site. “Snails play a surprising part in art,” he begins. Ya got that right, Jonesy!

Notice that to acquire a copy of this release, you don’t send money – you send a gift or a postcard to the address, in other words something more valuable than money – a little piece of yourself. It’s a fair exchange. Last noted this interesting label/project in August 2014 when we heard Montréal Tape Run. They could in some respects be regarded as the Canadian outpost of Rinus Van Alebeek‘s marginal sound art actions, by which I mean they are kindred souls, lovers of the small gesture, leaving trails of artistic slime across the world. Arrived 07 May 2014.