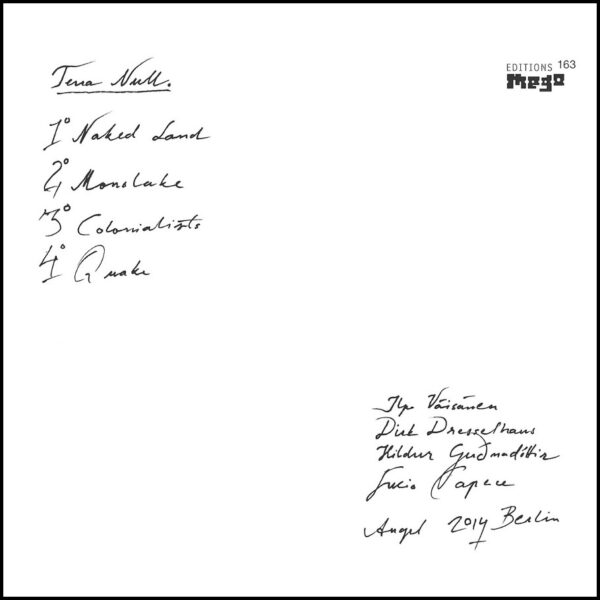 The initial signs seemed to indicate a record about 17th and 18th century emerging imperialism, with track titles such as ‘Naked Land’, ’Colonialists’, and the last cut, ‘Quake’, which gets bible-apocalyptic, roaring like Sunn O))), or Masami Akita (Merzbow, to us).

The opening cut ‘Naked Land’ betrays an almost spaghetti western sound, which seems to further underline the frontiersmanship. A guitar twangs, detuning and retuning, but the electronic side of the drones betray the time we’re in, and Angel collapse ancient into modern as Marx did when he talked about ‘primitive’ accumulation and the commodity as a kind of anthropological fetish.

Dan Latimer responded to Fredric Jameson’s stupendously influential ‘Post-Modernism’ essay, criticising Jameson for being essentially shoulder-shrugging. Here, Latimer described capitalism’s ‘beserk obsession with the bottom line.’ It was the best use of ‘beserk’ I have ever seen in print.

Because beyond its common connotation of ‘stupid’, the word relates to Viking warriors, whipped into a hallucinogenic destruction-fury to the point where they have to bite their own shields before going into battle, lest they bite off their own tongues. Somehow, this album puts us into that space, ‘Quake’ particularly, but via slow drones, cello, oscillators, guitar and scree, it also unfolds into what Latimer called:

‘…a sublime appropriate for individual subjects fixed in some vast network of international business, blinking, clicking, whirring incessantly to transmit, like transistorized Jedi Knights, the power of the Force.’

The buzzing, low tones simultaneously describe this evil landscape, at the same time as they try to open a crack in it, and of course speed is important here, temporality is crucial to capitalism.

The antique etchings on the CD sleeve may be of ‘the new world’, but they become, simultaneously, dialectically, about the new world we may be forced into, the place, as Jameson once told us, that we have no alternative but to go to. This is ‘utopia’, terra null, a no-place, at least not yet.

In summary, this is an utterly brilliant album. About as far from Sleaford Mods as you can get, formally speaking, but somehow Angel emerge from the same global fuckup, with just as much force.