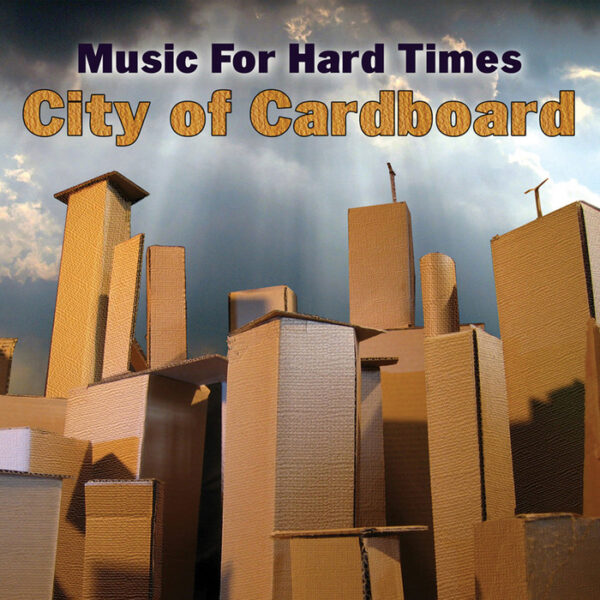 Listening to City of Cardboard by Music for Hard Times made me think immediately of Bart Hopkins’ Gravichords, Whirlies & Pyrophones book/c.d. combo from the mid-nineties. I often wonder just how many inventor types were spurred on by this tome to build sound-breathing monsters of their own. Though I’d imagine that by this time, instrument sculptor Tom Nunn was already at work, fashioning bagpipes out of puffer fish and marimbas from discarded kitchen tiles.

For …Cardboard, Tom’s armoury of invented instruments is matched with the heavily doctored bass guitar and sundry electronics of Paul Winstanley (also of the large free collective Plains), for seven single take improvisations. And, even if you’re au fait with maverick master builders like Richard Lerman, Max Eastley, Harry Partch and Lethe (Dry Ice on Steel Tables / EitherOAR Records), you’ll still be riding in alien territory. This is due in no small way to certain friction idiophones such as the ‘Skatchbox’ and ‘Lukie Tubes’ doing their cantankerous level best to dominate the proceedings. The former: a cardboard box with scrapable objects stuck to the top, its opening magnifying any sounds made above (kinda like the dadaists’ Intonarumori??). The latter sees a number of cardboard tubes, which when pushed along a textured steel resonator plate (cushioned by inflated balloons), sets up vibrations in tube and sheet.

Aided and abetted by ‘The Crustacean’, ‘Friction Twister’ and ‘Ghost Plate’, these weird sonorities are found at their most overloaded on “Bad Bolts”, where Tom’s blurred-hand manipulations replicate a crowded zoo of overagitated mammals and “Obstacle Coarse” where the listener is witness to what appears to be the chatter of those from the microbe kingdom…

All this sourced from the contents of an office stationery cupboard? It certainly seems that way. But let’s not forget that giving 3D life and colour to these contraptions is surely down to the superb recording/mixing/mastering skills of Paul Winstanley. And that’s really only half the story. As on “Augury Spirit” and “We Travel the Spaceways” (not a Sun Ra cover!), a liberal smattering of reverbed presence from the desk suggests more of a sound picture/composition than a warts’n’all exploded view of the sound source itself. For these tracks, I’d defy anyone to deny that what they were hearing was a recently unearthed session where Robert Rutman (he of the steel cellos semi-fame), was discovered guesting with k-rock free cosmo-jazzers Annexus Quam !!

Captivating sounds from humble sources indeed. Tom and Paul’s sheer ingenuity and innovation says that cardboard packaging will never be seen by me in the same light again…