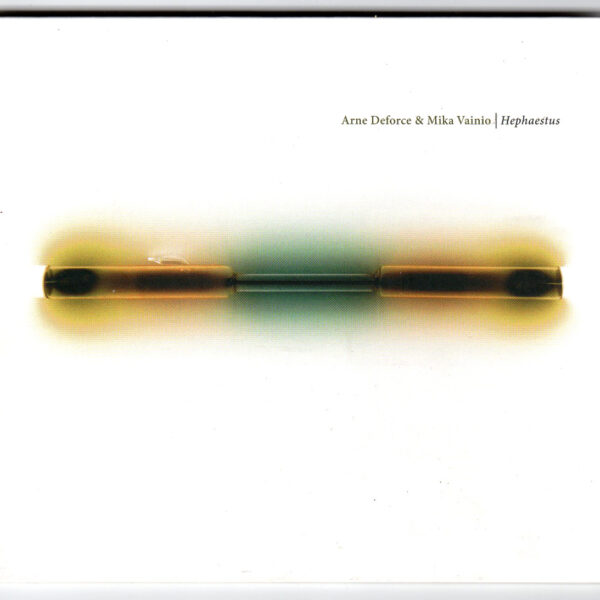 Hephaestus is a pretty good team up between Arne Deforce and Mika Vainio. Vainio’s work as one half of Pan Sonic is likely to be familiar to you and if it is, at this juncture I always recommend listeners and readers should revisit their 1990s work, which is still great listening today – brisk, cold, steely and brutal. I thought that Arne Deforce, the cellist, was a new name to me, but it turns out I’ve got at least one record he plays on, because he’s a tremendous performer noted for his execution of contemporary music – Xenakis, Niblock, Feldman, Scelsi – and loves to get his hands on “difficult” or complex scores, with a view to wrapping his vulture-like talons around the wooden neck of his axe. It would be nice to know therefore a bit more about the process, or method, these two musicians used when working together, but all we know is that Deforce played the cello and Vainio did “processing”, a vague term which could cover a wide range of studio-based activities. Parbleu! It’s good music / sound art, however they arrived at it.

While the music proceeds pretty much at the same slow pace, thus establishing a very solemn mood which pervades from start to finish, there are also great variances in (a) volume and (b) mood. While some tracks are simply endless contemplations of bleak and gloomy landscape, others are agitated and noisy, using studio reverb to create a virtually airless listening space of continual abstract sound. The album mostly projects a rich and layered drone (Vainio’s treatments almost amount to a form of saturation), but we do get to hear some strong moments of Deforce’s playing technique, for example on ‘Styx (River of Rage)’ where he resembles a sort of mad, sawing Hendrix-like figure creating tempestuous billows of incredible noise through diabolical fingering and terrifying swoops of his bow. This wild playing gives an image of his hands roaming up and down every inch of the instrument’s neck, in unconventional ways that would probably give most purist classical buffs an attack of apoplexy. And on ‘Lethe (River of Forgetfulness)’ we hear somewhat more refined examples of his skilled playing, repeated figures that recall aspects of modern minimalism and a dank, introspective tone that is very suggestive of Scelsi.

The final touch has been to create narrative “associations” for the listener to hang onto, which is where the track titles come in, purporting to portray various aspects of the Hephaestus myth from Greek legends; four of the tracks refer to rivers, including the famous river Styx, while one of them (the most exciting cut) is called ‘Stream Of Fire’. This need for portraiture and story-telling is something which has been coupled with classical music for some time, for example the Planets Suite or Pictures at an Exhibition. From May 2014.