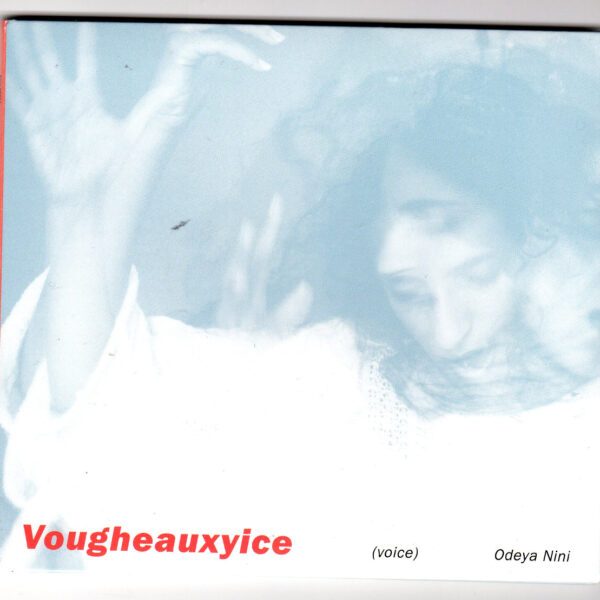 Following the extreme vocal utterings of Stine Janvin Motland (see this post), we have the extraordinary Odeya Nini with her album Vougheauxyice (Voice). It’s mightily impressive. I’ve rarely heard such a physical approach to using the voice as an instrument, and she throws herself into each performance like a boxer (she would prefer to be called a dancer), making her entire body at one with the sound she produces until she can “feel… the touch of its waves on my skin and in my bones.” Right away we’ve got some tangible bond between body language / movement with the way that the voice shapes its sounds. Mystical performance art happening here.

On ‘Mi See Ti’, for example, we learn that she performs this as a dramatic, theatrical work, where facial expressions play a big part, and she has to collapse her whole body to the floor to summon the forces necessary to make it happen. ‘Dalai’ is a more complex study, based on travels in Mongolia and her observations about the movement and sound of the wind in that land-locked country. The recorded performance here is like a powerful (and scary) recreation of a very personal epiphany of some sort. ‘Idioma’ is more extreme still, comes over as completely loopy and not unlike the radical avant-garde vocal music that made Cathy Berberian’s name; Nini takes inspiration from broken phonemes and syllables, and from bird calls, to create her own species of crazy whoops, “calls, yells, gentle flutters, overtones,” where the discipline required for the special types of breathing she must execute are something that most of us can only dream of.

On ‘Tunnel’ and ‘Everyday Cantor’, the singer connects with her “yemenite roots”, basing the former on a Jewish folk song and striving to reconcile her modernist, experimental composer self with the deeply spiritual identities of her ancestors. The mixed emotions in ‘Tunnel’ are astonishing, but despite the melancholy tone of her plaint Nini’s voice never falters for one second. The natural echo on the recording adds much to the plangency of the song.

After this point the album takes a slightly more conventional route down a well-travelled “experimental music” path. ‘Tapestry of Synonyms’ is a collage of recordings collected on her travels over many years; it’s a restless and rather pointless jumble of information, and doesn’t feel like it’s been properly edited or composed. ‘There Are So Many Things That I Have To Tell You’ is slightly more successful, providing you’re prepared to listen to ten minutes of her personal innermost thoughts, tripping out of her mouth in a free associative manner like a less stilted Laurie Anderson. She does this by improvising in front of a microphone using a loop pedal effect to layer words, sentences, and fragments of song; the Secret Diary of Odeya Nini, as it were. A very good and unusual record. Arrived 15 May 2015.