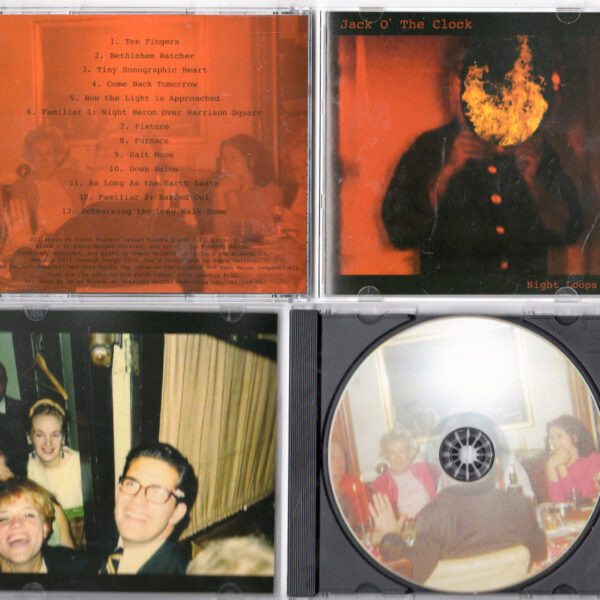 Night Loops (NO LABEL) is another astonishing record from the all-American combo Jack O’The Clock, following on from the All My Friends album which we noted in April 2014 with eyes agog and breath bated. Once again this mostly-acoustic five piece play the compositions of lead singer and musician Damon Waitkus, and throughout they conjure up stirring visions of a hybrid American history, part fact, part poetry, part visionary hallucination. There’s much depth and complexity contained within each song, hidden to some extent by the “ordinary” sounding titles, but Waitkus generously pours out lyrical images and unexpected turns of phrase that almost cast him as an folk-Americana-rustic reincarnation of Peter Hammill. He outdoes Walt Whitman and Thoreau in his compressed and multi-dimensional layerings, superimposing stories, memories, and fleeting dialogue on top of each other in each compacted song. The talented players Packard, McLoughlin, Hoopes and Glenn are required to swing their way effortlessly through elaborate chord changes, swoon-worthy layers of vocal harmonies, and melodies that weave their way around your head like creepers in a tree. Besides the dreamy songs, there are a number of shorter compositional works, replete with unusual sounds and instrumentation but quite heavy on the sort of creaky and clunky percussion that recalls the “bone machine” of Tom Waits, which earn Waitkus his spurs as a serious and inventive musician, occupying his own unique niche in a hollow log. Highly recommended…suggest you make tracks and investigate the back catalogue while you can. Arrived 12 May 2014. 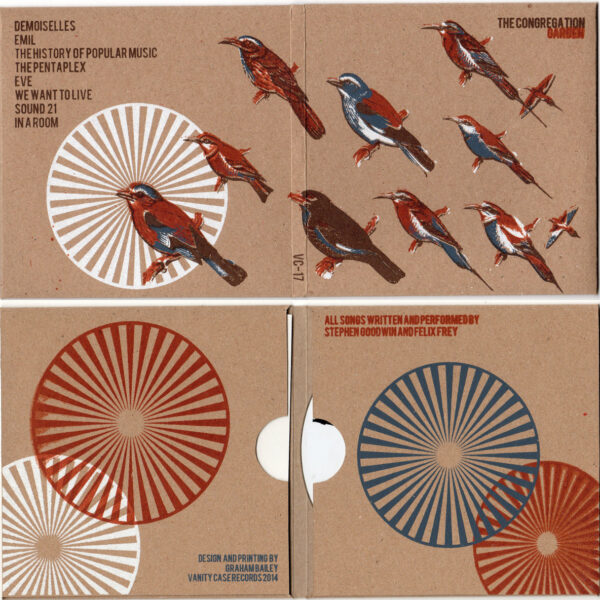 Quite often a pleasure to receive records from the Leeds-based Vanity Case Records label, home of an underrated band Frozen Geese. The Congregation features two refugees from said band, Stephen Goodwin and Felix Frey, and Garden (VC-17) comprises eight lovely, melodic and quite wistful songs and instrumentals, constructed around acoustic rhythm guitar and drumming, with restrained lead guitar overdubs. This duo have been learning their lessons well from Buffalo Springfield, Love, and Stephen Stills. I like the simplicity with which these tracks have been assembled, and what comes across is a real clarity of purpose, even when the musical ideas are not all that innovative. “A haunted Spector appears”, reads one of their printed ruminations in the press handout, but perhaps a more appropriate figure might have been Jac Holzman 1. The attractive screen-printed cover was designed and produced by Graham Bailey. Arrived 08 May 2014. 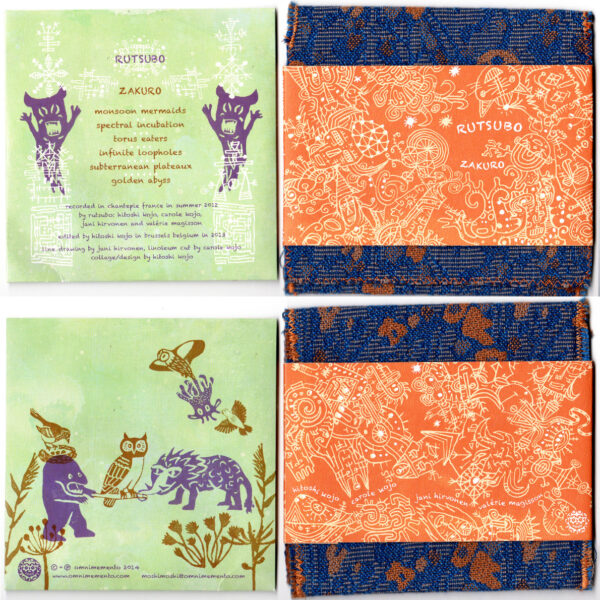 You recall the Japanese creator Hitoshi Kojo and his duo Jüppala Kääpiö, a project which he does with Carole Kojo from Switzerland. They’ve joined forces with Jani Hirvonen, one of the more prolific and productive Finns from the over-crowded Finnish acoustic feysters, who has made a lot of records as Uton; and Valérie Magisson from France, a music/video artist who is also known as Sunhiilow. As Rutsubo, this foursome of international players have created six long-form drone-works of extremely layered and cluttered music on Zakuro (OMNIMEMENTO OM10), which pour themselves over the listener like an impossible mix of sunshine, benign insects, wildlife, soft showers of rain, and friendly coloured clouds. Hmm, I seem to be describing a screen from a computer game…the press notes wish to convey notions of “ancient civilisations”, “shamanic” trances, and “pulsations from the depths of the earth”. I do like the varied means of production, and while it’s generally hard to identify specific instruments in this soft morass of sound, the use of layered and treated voices on certain tracks produces a strangely enjoyable sensation of queasiness. What troubles me on today’s spin is the general lack of structure and compositional rigour; each track just lays there like a stagnant whirlpool, progressing very little from start to finish. However, it’s not an unpleasant listen and the surface sound this group makes has its attractions and appeal. The cover art uses line drawings and linocut images by the Kojos, and packages the whole in a fabric pouch with a card band. Arrived 01 May 2014.