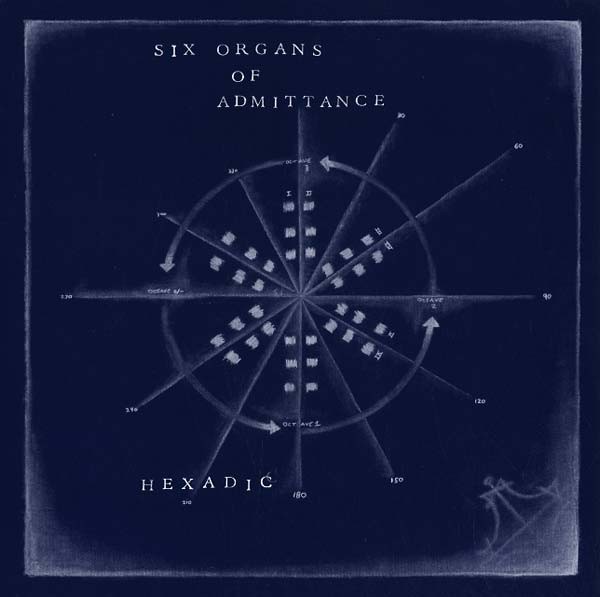 Ben Chasny’s ongoing solo project Six Organs of Admittance takes a sharp turn into sonic territory of a stark and terrifying kind, familiar to those of us who’ve long followed Keiji Haino and Fushitsusha. Indeed, had I received this recording in a blank jewel CD case with no labelling and I had just whacked it into the player, I could have sworn blind this was yet another PSF label release. There is that dark atmosphere with the slight acid sheen that sharpens the guitar tones and which leaves the listener feeling apprehensive as to what’s going to happen next, whether there will be an excruciating howl from out of the pitch black or a roaring cloudburst of guitar feedback.

Well the latter comes courtesy of “Wax Chance” but the singing isn’t coming from Haino’s tortured tonsils: it’s Chasny’s own tentative fragile voice struggling for a foot-hold in the feedback storm. Those blasts of raw searing guitar noise, burning up the darkness, could have come straight from the stables of Fushitsusha. Coming so early in the album, this is bound to chase away anyone not familiar with Six Organs of Admittance and its forays into folk, heavy psych and noise. For all the relentless noisy guitar clouds, the recording is consistent and focused and actually very steady. Drummer Noel von Harmonson keeps a firm hand on the percussion, the calm helmsman helping to steer the ship of musicians gathered around Chasny as he leads them all into sonic storms and apparent turbulence. Bassist Rob Fisk will sometimes busy himself fingering quiet individual melodies with little interference beneath the howling abrasions overhead. The result is that the music can be at once calm and reflective, and chaotic and relentless in assault.

The contrast between cool, calm and collected on the one hand and on the other, constant roaring sonic violence, going all at once becomes greater as you go deeper into the album and it’s about mid-point that the recording really excels with the sharp attacking assaults of “Hollow River” and “Sphere Path Code C”, immediately followed by the meditative desert-Western blues of “Future Verbs” and the ghostly chimes of “Vestige”.

For this recording, Chasny invented a chance-based composition technique that uses playing cards to determine sets of six notes for each track: the technique applies as much to the rhythms and lyrics that help define the songs. Although the music can sound very formless and takes some getting used to, each track is quite distinct. How such a method of music composition led Chasny on a path that turned his work into a creature of such extreme moods that even Haino and the PSF label fellow might gawp at, not to mention turning the raw material into music close to what Chasny has always liked anyway (heh heh), can only be guessed.

While I like “Hexadic”, the record’s style of strong contrasts and single-minded focus won’t appeal to very many casual observers and might not even appeal to long-time fans.