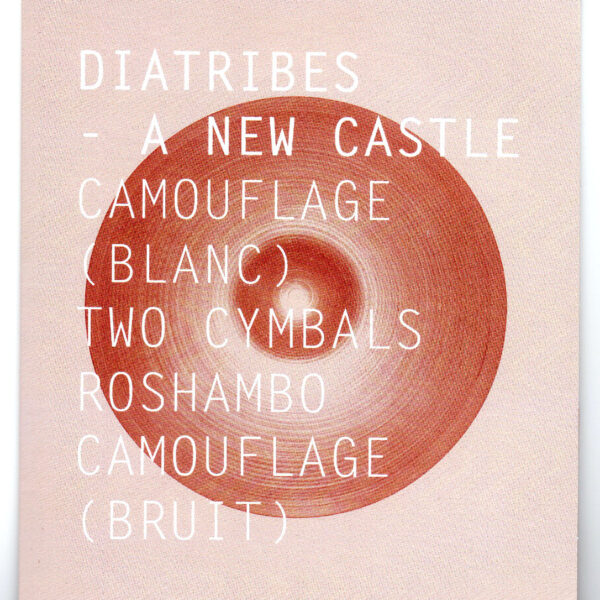 Despite the title, A New Castle has nothing to do with Tyneside, so if you were hoping for radical versions of Lindisfarne songs played on cymbals, singing bowls and laptop electronics, you’re out of luck (although if anyone wants to record an album like that, I’d certainly buy it). Instead, here are four austere experimental pieces from Swiss musicians Cyril Bondi and D’Incise, operating under the name Diatribes. A New Castle is their second album as a duo.

The record label describe this release as “minimal compositions based on recurrencies and ultra-horizontal developments”, which is about right. It would be interesting to see the waveforms for these tracks on Soundcloud, or wherever it is that the young people hang out these days. I can’t imagine there are too many peaks and troughs. It’s as if the music has been scoured and ground down to the thinnest possible layer of sound.

The opening and closing tracks are both called “Camouflage”. The first, “Camouflage (Blanc)”, is a combination of resonance, granular susurration and silence. The last, “Camouflage (Bruit)”, is a noisier version of the first, relatively speaking, put together with electricity substation hums and tinnitus tones. If you could somehow translate radar cloaking technology into music, it might sound like this, so “Camouflage” is a pretty apt title.

In the middle, we have “Two Cymbals”, a barely perceptible sequence of pulses played with a soft mallet on hand-muted cymbals; and “Roshambo”, a musical version of “rock, paper, scissors” using simultaneous pair combinations of sounds. You can download the ‘scores’ to these pieces from the Diatribes website. This is well worth doing, since it will deepen your appreciation of the pieces and allow you to play them yourself, if you wish. The artists have even provided a link to the electronic backing track for “Two Cymbals” for you to use. Sharing methods and resources in this way shows a generous and collaborative spirit.

A New Castle is sparse, wintry, but fascinating, like the thinnest layer of mist over Lake Geneva. A bracing alternative to Fog on the Tyne.