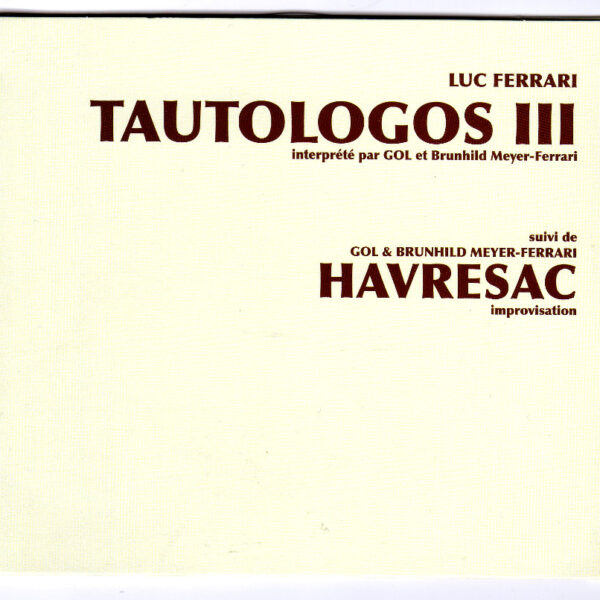 Brunhild Meyer-Ferrari has joined forces with the performing group GOL on this fine record (COLLECTION PIEDNU PN0114), where the main event is their performance of ‘Tautologos III’, a composition by Brunhild’s husband Luc Ferrari (who died in 2005). Brunhild was a collaborator and contributor to Ferrari’s work, and in fact her voice plays a central part on compositions such as Programme Commun and Contes Sentimentaux. Meanwhile I find the GOL combo have lent their collective weight to performances with Charles Hayward, Charlemagne Palestine, and even Ghédalia Tazartès – often in the content of international music festivals. They’ve worked with Brunhild before on the Exercices D’Improvisation LP in 2010.

Here, their rendition of ‘Tautologos III’ involves use of electronics, stringed instruments, clarinet, and reworking old cardboard boxes to be scraped, crumpled and generally adding to the performative flow. Plus plenty of voices. Luc Ferrari was one of the most imaginative composers in the electro-acoustic vein, and I’ve always been struck by his ingenious placement of voices (be they live, pre-recorded or found tapes) to creative mysterious, evocative effects; he seemed to know just where to add them in the stereo image for maximum impact. Clearly, Brunhild understood that too. The voice elements are used as one more mosaic component in this staccato composition from 1969, an ingenious assemblage of tiny fragments of sound gradually resolving themselves out of chaos into a coherent whole; listen, and you’ll soon be able to recognise and anticipate the repeated sections which crop up almost like the chorus to your favourite pop song. It’s not just a fascinating collage of sounds, but also of timbres – the different types of studio effect, including a range of different flavoured echoes, create extra depth in the various perspectives in this ingenious construction. Fascinating…if the musicians managed to do this all “live” in the studio, more credit to them.

The second piece ‘Havresac’ is a pun on the name of Le Havre, where they recorded it in the Honolulu studio, and features the four musicians with much the same set-up as above, perhaps improvising to some extent. After the tension and attack of the Luc Ferrai piece, this seemed a bit more relaxed at first, but in fact it’s informed by a similar sense of “episodic” construction and a concern to juxtapose all manner of wild sounds, stuffing them all in the same “haversack” so to speak. The use of the mixing desk fader levers (thanks to Xavier Roux) has worked well to rein in some of the more rambunctious performances, including those from the percussion section. For me the star of GOL has to be Jean-Marcel Busson, who does impossible things with his electronics set-up that Jérôme Noetinger would be proud of. I see Busson uses the “Metacrackle” device, about which I haven’t been able to discover very much; I would like to think it’s a successor to the famous Crackle Box invented by Michel Waisvisz.