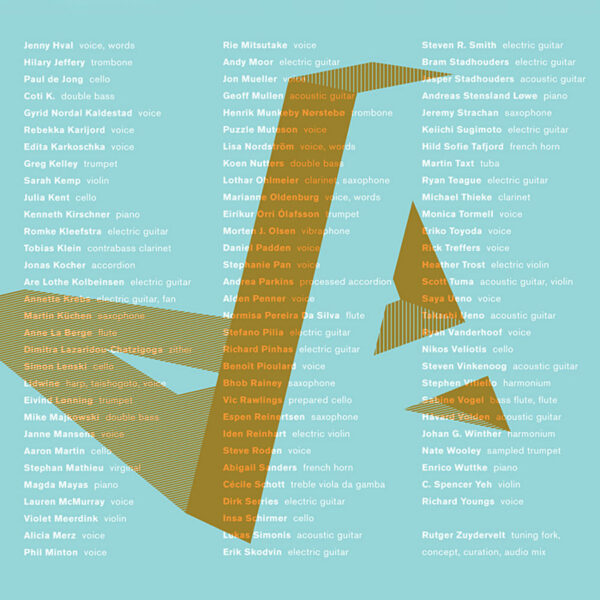 AAAA, what have we ‘ere. This disc has evolved out of an installation that Rutger Zuydervelt undertook, the aim of which was to document the moment prior to performance, the point in time that musicians use to tune up and ascertain they are all playing from the same pitch sheet. To construct the piece he approached approximately 150 musicians and vocalists and asked them to record an A note, using any technique or style they preferred. This latter playing directive does aid in bringing variation to the work and means we don’t hear the same thing repeated throughout. Each contribution is able to bring its own individual characteristic, which adds to a greater whole. We hear, for example, an A played in different registers on the piano, felt hammer striking a string as in traditional piano music, as well as the same string being plucked and scraped. The eleven pianists I counted in the credits vary their attack by providing a fast pulse, a rhythmic note that punctuates the silences in their playing, or any other method of their choosing.

The installation itself was laid out using multiple speakers and each of these was dedicated to an instrument class. The audience were encouraged to walk through the space, experiencing each aspect of the orchestra as they moved, but also altering how they heard the piece as a whole as they did so. Closing in on one speaker, allowed the audience to have a more intimate involvement with a single group, highlighting the different details, imperfections and the characteristics of each. Standing in the centre of the array of speakers concentrated the attention of the listener on the orchestra, surrounding and fully immersing them in the music. The ‘colour’ of the drone changed as they promenaded.

A trip online as an aid to understand exactly how it was set up shows images of rows of speakers arranged around the walls of a sparse white-walled gallery. There is a short video online, of the one occasion that it was exhibited outdoors, with speakers attached to trees. This was more in line with my mental vision of being able to weave in and out and gave some idea of what might be encountered in situ. There are provisos to this, a lot of sound is going to be travelling upwards away from the listener and lacks the resonances of the gallery. It does however display the amount of space between each instrument, allowing the listener to pick out more details which otherwise get buried in the CD. Both versions should be approached differently, the latter is more of a sonic assault from the off, as all the speakers are reduced to two channels. The instruments on the disc are introduced in stages, maybe as a way of replicating the perambulations of the gallery, possibly to stop a sense of being overwhelmed.

The piece starts with a tuning fork tuned to the standard 440 Hz = A and what to me sounds like a sine wave set to the same frequency. This I mention because there is no credit given to the latter. If it isn’t, it’s one mighty strange zither. You can hear this tone change quickly into the more raspy sound of a vibrating string resonance. To this are added a virginal, strings (violins, violas, cellos, double basses), wind and brass (flutes, horns, tubas, clarinets, saxophones, trombones, trumpets), voices, vibraphones, banjo, harps, accordions, harmoniums, pianos, acoustic and electric guitars, (more) voices. In that order. The earliest parts of the piece are more intense. As you progress through the work you are able to distinguish more features, hear the different voices and modes of attack.

There are of course comparisons to be had. The obvious ones would involve the work of Janet Cardiff and George Bures Miller. Their Forty Part Motet, for those who do not know the piece, replicates each part of Thomas Tallis’ Spem In Alium. Each part is broadcast through its own individual speaker and these are then grouped into Soprano, Alto, Tenor, Bass, Baritone. Once more the audience are encouraged to wander, listening to the piece changes as they move about. Another installation, Experiment in F# Minor, takes another approach in dispersing sounds in the key of F# Minor. Lastly, King Crimson at the end of their album Islands close with the chamber orchestra tuning up, and even Sgt.Pepper’s might be considered.

The musical note A above middle C serves as a general tuning standard for musical pitch. Although not universally accepted, it has, since its adoption in the 20th century, served as the audio frequency reference for the calibration of acoustic equipment and the tuning of pianos, violins, and other musical instruments. The other A notes that are heard within the piece imply that Zydervelt did not stipulate MIDI note 69, A4 in scientific pitch notation, the one that vibrates 440 times a second, one would presume to give a little variation and interest.

Each instrument, by its nature, radiates sound particularly effectively within certain general frequency ranges. Components of the sounds that happen to fall within these ranges ring out fully, while those falling outside are de-emphasised. As different notes sound from a given instrument, different overtones are accentuated as they fall within the ranges of emphasised frequencies. These overtones give the piece life. Swirling around, merging, weaving, pulsing. As a bit of a sucker for drones, it is these fluctuations, in which your mind perceives things that might not necessarily be present, that work their magic. It is good to hear the differences that arise when the same language is spoken and Zuydervelt has certainly gathered together some of the top names in avant garde/experimental circles to do the piece justice. They bring with them years of alternative methods of sounding their instruments, adding various textures that give a rewarding listening experience to those who value this art form.

Considering the lack of melodic movement it is surprising how many ‘tunes’ still managed to come into my thoughts whilst listening. Once the trumpets hoved into earshot, I was constantly reminded of Robert Wyatt’s Rock Bottom. When what sounds like a bell arrives, thoughts turned to Arvo Pärt’s Cantus in Memoriam Benjamin Britten. It must be said, the music under consideration here, engenders by its very nature, this otherworldly, spiritual, meditative world provided by the latter. To be played loud or almost silent. Picture the problem.