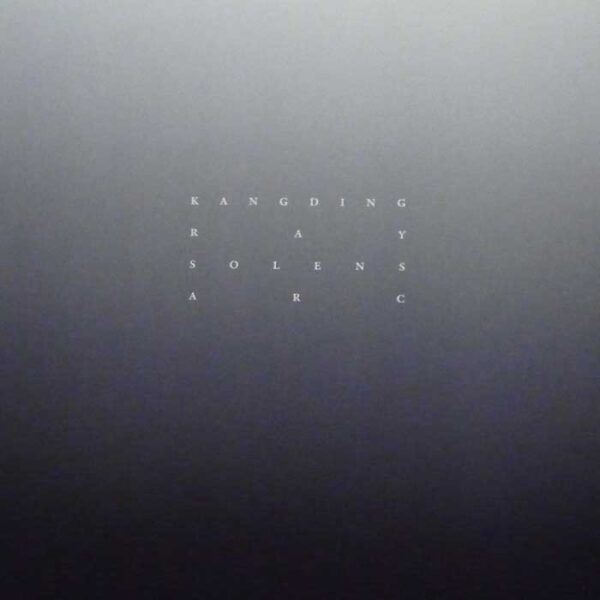 In a sealed room, somewhere deep in the heart of Europe, a man with a magickal pseudonym forges a Golem out of minimalist Plastikman techno. Animating it with a secret formula encoded in old Tangerine Dream LPs, he sets it off on an implacable but mysterious mission across four sides of black vinyl. Welcome to Solens Arc.

French producer David Letellier has operated as the pleasingly onomatopoeic Kangding Ray since 2006. This is his fourth album for German electronic music label Raster-Noton. Letellier worked as an architect in a previous life, and he certainly displays a sense of construction, design and respect for good materials here. The twelve tracks are structured as “arcs”, developing motifs across each side of the double LP. You kind of lose that effect on CD, of course. On the other hand, you do get an overall sense of how meticulously assembled this music is. This is an album in the proper sense, to be listened to, in order, from beginning to end.

Proceedings kick off slowly but forcefully with “Serendipity March”, the sound of something coming to life and starting to move – you can even hear it breathing, if you listen carefully. This morphs into the 25 celestial seconds of “The River”, before the beats return in “Evento”. Here Letellier deploys a sound effect that might be pebbles rattling in a tin can. Interestingly, the hideous creatures in Garth Ennis’ horror comic “Stitched” are animated and controlled by evil sorcerers whirling pebble-filled cans on lengths of chain, but the entity coming towards you here feels more benign. Probably.

This completes the first “arc” and, if you’re listening on vinyl, the first side. It sets the pattern for everything that follows – monstrous techno beats and ethereal beat-free interludes, organic sounds and lunar synths, grainy vibrations and melodic arpeggios. As the final track, “Son”, fades into backwards static and silence, you can easily imagine all the elements rising up and combining in another “arc”, propelling you onwards into eternity.

Like the Golem itself, Solens Arc sounds as if it could just keep going forever, or at least until somebody alters the formula which brings it to life. But with such a transporting experience, why would you want to?