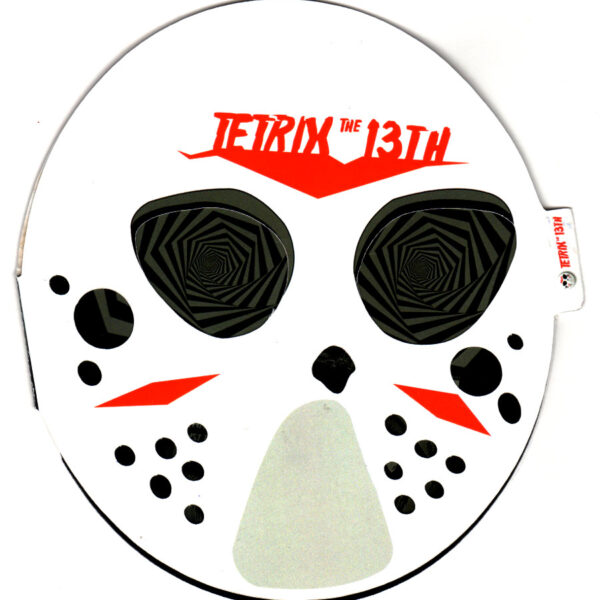 Here’s the 13th album from Tetrix, the Canadian band who continue their style-shifting pastiches of modern pop musics with tongues planted in cheek…if you’ve noted the last two items we heard from them, they’re now very keen on working with this radio-play album-as-story format, and Tetrix The 13th (NO LABEL) follows a similar path…some similar precedents I’ve heard within living memory would include Spirit’s The Adventures of Kaptain Kopter & Commander Cassidy in Potato Land that was released in 1981, or The Magic Shoemaker by Fire…previously, Tetrix have pulled off a War Of The Worlds parody and a time-travel story with a certain amount of panache. For this outing, it’s a parody of the Friday The 13th series of movies that were incredibly popular in the 1980s. I’m at a disadvantage already, having not sat through a single release in this “franchise”, but even I am able to recognise the hockey mask motif and appreciate it’s now embedded in our culture as shorthand for a deranged serial killer.

Well, Tetrix are not afraid of cliché, and boldly use that image for the front cover, again an elaborate fold-out and die-cut construction of which 400 copies were made. Inside, the CD is printed with a circular buzz-saw which you can insert in the pocket which is printed with an image of a red chainsaw. (Were chainsaws ever used as murder weapons in these movies? You tell me.) The story on the disc is, as ever, an oblique and confusing one, and spends an awful long time on the set-up – we’re over halfway through the album before the band even arrive in the summer camp setting. “Cringe in terror as Tetrix is chased by an axe wielding murderer!”, they promise us on their Bandcamp page, but I listened closely and couldn’t find this episode here in the grooves at all. As to the payoff, I’m not even sure there is one, because Tetrix spend so much time debunking their own narrative and calling attention to contrivances in the plot, that they forget to actually tell the story. I expect this is part of the plan, though. As to the music, it’s the usual bewildering mix of pastiched pop music styles, including psychedelic rock, rap music with lashings of four-letter words, and soothing ambient tunes. To their credit, I must say the music is performed flawlessly, which may compensate some listeners who find the humour a little irritating. I’ve enjoyed some parts of their previous records, but even I find the joke is wearing a bit thin now. From 08 August 2014; the download version is free, the package with the mask is limited to 400 copies.