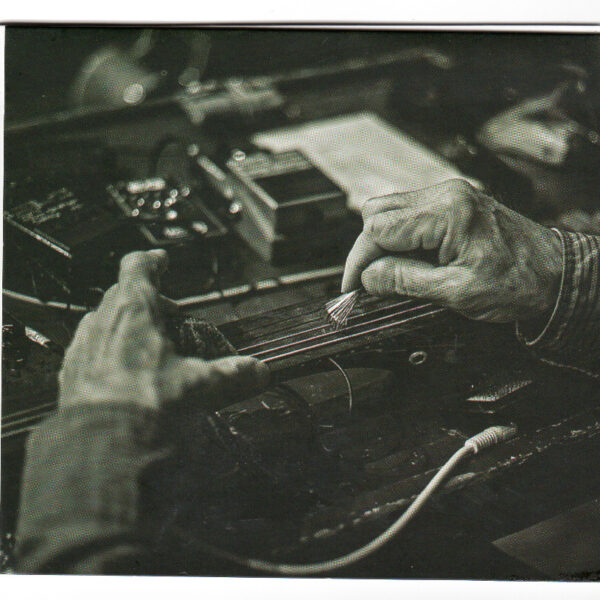 Once more I’ve probably spent longer than necessary waffling on, so I’ll offer a quick précis for the impatient or sensible: some quiet sounds, pretty low key, fairly neutral. For those who want to read that extended by a thousand words or so, read on:

Contents: One CD, two extended ‘pieces’. Although, whether they are pieces, as such, with a pre-determined beginning and end, an allotted span, or even extended – they may just as well be snipped down from longer actions – is not clear. Nothing is clear, actually. And yet, everything is clear, very sober and lucid. Once you turn the volume up. Yes, keynotes for this release can include:

Close-up electric stubbles of sound bristled together in a room, not overly concerned in the direction of grand gestures. The first track is a duet between Rowe and Costa Monteiro whereas the second track involves the whole quartet.

Yes, it’s quiet, yes, in the grand scheme of things not a lot really happens, not a lot happens (necessarily) with a wall, though, but there’s texture and there’s presence of some sort. Along the planes of these pieces, alongside the mostly rectangular construction, there are a lot of faintly mystifying, dry and yet modestly engaging palette-scrapes of object-derived sound-tint.

Grumbling cardboard bass blots and rumbles from a box. Mosquito tones (but of course), knee-knocked tables. A classicist relish, a moderate relish: dropped marbles. Apportioned, measured with a sober embrace of plain and small sounds and their economical distribution (amplitudinally and temporally).

Not puritan, not rapacious, this inhabits some other middle ground, or unrelated ground, a moderation of sound without dogmatism, seemingly arrived at, intuited or agreed on, by all players, rather than as a consequence of paucity of ideas or tentativeness in expression (There’s room for relatively garrulous outbursts, for example the iPod and subwoofer interjections in the quartet track are not censured, nor, however, do they permanently alter the composure or focus of the proceedings. They just happen.) No, tentativeness is definitely not an impression to take from this, especially from Rowe’s contribution, his precise and economical deployment of movements to release sound from his tools exudes focus and his (totemic? In a sense, perhaps, but more so a quietly active, performing) presence seems to confer and amplify a collective focus. The character of the recording, of the document, is equally focussed and precise. Spare. But also made up of spare parts, of ‘objects’. Distinct – everyday objects and instruments with gaps between them, sounds with gaps, too; space to spare.

As it happens I was not averse to hearing the CD a good few times. My main motivation for the multiple auditions was reviewing purposes rather than major hedonism or passionately abandoned enjoyment but maybe as it is so neutral and moderate those numerous listens never felt like too oppressive or demanding a proposition. Ok, a proportion of those times I was also maybe straining to hear it over other domestic and environmental noises; it’s not THAT quiet, as these things go, not enough for it to really be a thing, quiet music, or rather an extreme thing, there are no real extremes here; the contour lines on this landscape are, however, quite widely spaced, barely perceptible as changes in elevation from above on this flat, laminal landscape. As well as the birds eye view ground level detail counts here, too, a fact borne out by the fascinated cover photos of Rowe’s hand and Belarukov’s (I’m assuming from the presence of the ‘mini-speaker’) sound producing objects. Turn the volume dial (what a cliché with quieter music. Why isn’t it louder to begin with, then, you might wonder, when someone writes or utters that phrase?) and the topography acquires a measure of relief; contrast between sound sources becomes more apparent. Tight-focus as it is, the incidental luxury of texture, relative harmonic variety, is more available with attentive listening and amplification.

In the species of electro-acoustic music on show here as well as your by-now-classicised (calcified?) moves such as high-frequency electronic tones, non-playing of instruments (i.e. pumping of air without playing notes on the accordion, scraping the saxophone), the human genesis of the sounds, the everyday, is ever-present, perceptible; both micro and 1:1 scale events accumulate; between this person-sized puttering and the abstracted textural sonic juxtapositions there is the flickering challenge to perceive in multiple ways at once, to be aware of both the basic building materials and of the whole, to walk round a sculpture, regard a painting. To engage and regard as abstract, abstracted ‘music’, whilst also simultaneously hearing document, agency, origin, familiarity, specificity. Something that probably happens intuitively whilst listening to music usually, this process is perhaps more exposed and perilous with this relatively severely reduced and minimised collections of sounds and gestures. Sounds at once untethered and tied to people and (small, small) movements and space. This is still, overall, very much the sound of four people puttering about with some tables and some bits and bobs, avoiding on the whole making assertive sounds, but the manner of puttering adds definite shape and tone, is on the whole determined and deliberate without being clinical or cold, certainly proceeds at a measured pace indicative of concentration, imbues the pieces with specific shape, space, tone and mood which is alert and reasonably approachable.

This shape and tone can resemble a rarefied/reduced/democratised species of chamber music, in a way; the intimate focus, hushed mood, a small ensemble. No classical affect or tropes exist here – perhaps one or two of small music or electro-acoustic music do, though. A pervading suppleness and openness keeps this comfortably away from zones of tedium or lassitude, or from being po-faced, the more giddy and defined interjections like the muted sub-woofer rumbles (courtesy of Belarukov, I think) and metronome in the quartet track help mean no-one could be accused of fundamentalism or exerting too-tight a grip on proceedings. No one would probably characterise this as exuberant or a laugh a minute; My feeling is that Rowe does add some heft, but leads, perhaps unconsciously, by example rather than force and the consequent breathing space permitted all players is to everyone’s advantage, and although resulting in some odd lumps it at least keeps things fresh and fairly portable.

What it all adds up to, apart from its specific formal and tonal qualities, is anyone’s guess. Rather than speculate, you might as well listen, if you fancied some small lower case improv with no overt agenda or direction. Maybe just as the cover suggests, this is essentially a snapshot of a meeting, the session that took place. The importance attributed to it by its participants, their thoughts on it as a recorded release, the reasons it exists in the form it does, is never specified. Taking into account its standardised production values, shared with many ‘essential’ (in marketing speak) releases it is perhaps refreshingly inessential, even on multiple listens it remains so, it doesn’t become more or less significant. Yet it is ‘essential’, sound-wise, or of its essences, if you get my drift. The materiality of it, the less than monumental nature, the attention to surface, the aura of relaxed focus and tempered exploration distinguish it, at a micro-level, horizontally, from other releases in the happily, self-sufficiently proliferating, self-regenerating, field of scraping things, not playing notes on your instrument and occasional crackles.