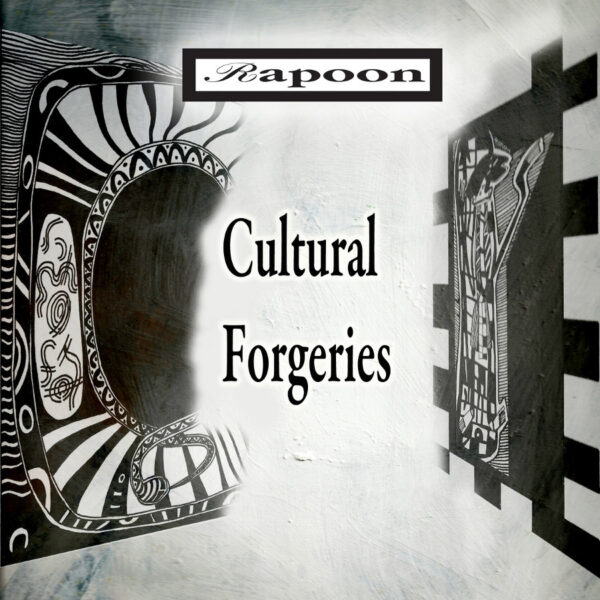 Get on board the Noon Balloon to Rangoon with Rapoon, for another free-floating tour around the musical cultures of Earth (just not the version of Earth you’re currently living in).

Robin Storey will be a familiar figure to many Sound Projector readers, having started out with industrial pioneers :zoviet*france in the early ‘80s, before adopting the Rapoon persona in 1992. Since then, he’s shown a Stakhanovite approach to releasing music. This is something like his 60th album, although it’s easy to lose count when going through his discography online.

Cultural Forgeries started life as an “unplugged” project, at the suggestion of label boss Robert Pepper (last heard descending into the underworld with NYC noise-slugs Limax Maximus). These acoustic pieces were recorded directly to portable digital recorder, using a bodhran as a reverb chamber. Feeling that these lacked a certain something, Storey then added a few processing effects, so this is technically an “unplugged and plugged-back-in-again” project.

Seventeen tracks of the rich and strange, then, played on trumpet, Indian and Chinese flutes, cello, one-string slide guitar, and other exotica. There’s a trance-feel to many of them – “Suit Toot Coconoot”, for instance, could have been recorded at the tail-end of a 24-hour piping ritual somewhere in a forbidden valley of the Atlas Mountains. Some tracks, such as “Banjo Arabiata”, have a sense of loneliness and sadness at their core.

Elsewhere, you get Balkan echoes; wheezing squeezebox ballads that might be sung by the the nightmarish inhabitants of “The Third Policeman”; percussion pieces; blues abstractions and classical tones. “Donnez-moi une cigarette” and “Je veux d’l’amour” could even be lifted from some fearsome mid-70s Miles Davis triple album, documenting a previously unknown concert in James Hilton’s Shangri-La.

One question springs to mind. How come it’s taken until now for someone to record a tune called “Cello Yellow”?

This sort of music sometimes picks up tags like “ethno-ambient”, which is selling it rather short. Rapoon himself prefers to call it “soundtrack music”, and this makes a lot of sense. Cultural Forgeries could be the soundtrack to a lost Orson Welles travel documentary, where everything looks, feels and sounds authentic, but which is all entirely made up. This is a very, very good thing, because making things up is a noble and honourable pursuit.

These forgeries are the genuine article, assembled with love, care and respect. A new world awaits your exploration.