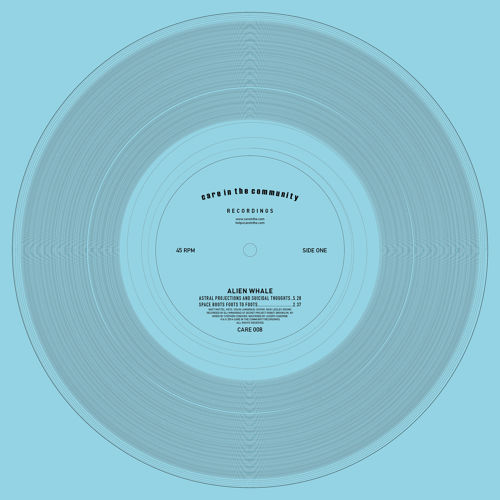 The Ruminator (NO LABEL) is mostly a solo work by Steve Schmitt, taking a break from his Seattle “surf noir” band Diminished Men; he knowingly imitates great surf records from the past and twists a little black scuba knife into the heart of each tune. Crisp sound booming out of his beach-side studio, but the tunes lack a strong melodic structure. The overall production is amateurish, but at least it beams in loud and clear. Hang five out of a possible hang ten.

My Tiger Side is the solo work of Remi Saboul, who thoughtfully provides a detailed catalogue of all the guitars he plays on 1 (WLD CD 01 / ALTER SONIC ASR 08) so that we might better appreciate their tone colours, perhaps. Considering he has a tiger’s head and is friends with a chimpanzee, I was hoping for more feral music to leap fully-clawed from his wild amps, but he mostly plays wistful, melancholic non-tunes and slow drones.

Some strangely affecting moments on Chvad SB’s Crickets Were The Compass (SILBER RECORDS NO NUMBER). This American experimental droner has been active for over 20 years with his band and solo work. Here he works against the trend towards “lushness” in ambient electronica, and his empty-stage pulsations and eerie bleak tones hint at inner darkness and desolation, like three heavy-hearted bats sighing at twilight. Unsurprising that he gets film score commissions; instant atmosphere is his bag.

Crackling Spanish free jazz on Sputnik Trio (RAW TONK RECORDS RT006), recorded in one day in Madrid by the team of Ricardo Tejero, Marco Serrato, and Borjia Díaz. It might help that the rhythm section have other jobs playing in metal and noise-punk bands, but in fact if you read the collective CV of this combo, it seems there’s no genre or style of music at which they haven’t tilted their lances. Tenorman Tejero is also a composer, conductor, and music teacher, if you please. Some of the track titles lend weight to the “outer space” theme, which might stir Sun Ra Arkestra fans in this direction, but they’d be disappointed; overall the Trio expend most of their fire in the opening cuts, then pass remainder of the sesh diddling around with annoying playing techniques, half-finished ideas, and false starts.

Period are an American duo playing bass and drums in loud, roaring fashion on 2 (PUBLIC EYESORE 129) – Charlie Looker and Mike Pride roll out a species of slightly more cerebral sludge-rock tempered with alien noise and thoughtful quieter passages, aimed at the evening cocktail set who frequent today’s hipster bars in search of free noise. Imagine Nadja dressed in a blue lounge suit, or Melvins with red-rimmed glasses. Chuck Bettis (who has made some splendid solo noise records) adds guest vox and electrical equipment on 5 of the 7 cuts, plus Darius Jones and Sam Hillmer weigh in with some wayward sax howls. Apparently Period don’t improvise, they “compose-in-the-moment”. Some good moments, but largely aimless.

Micro-mini-inaudible sounds abound on (aral) (MYSTERY SEA MS74), an electro-acoustic composition from d’incise that may use field recordings somewhere in its mysterious construction. But recordings of what? The poetic press notes allude to water, deserts, heat, and the process of evaporation. It’s abstracted to the point of bewilderment, not offering a single familiar element to the listener. Listen long enough, and next day you’ll find you turned into a molecule.

Michael Durek has fun playing as The Use on his album What’s The Use? (ALREALON ALRN052), a collection of 10 wobbly synth-pop ditties that show his stylistic influences from watered-down hip-hop music and allow him to indulge his classical piano-playing skills with many accomplished arpeggios and trills fed through squelchy synths. Despite the bright colours, bizarre sounds, and rollicking fun with the beats, there’s a serious lack of compositional skill and basic design that hampers every track, creating a very frustrating listen despite his obvious keyboard fluency. To put it more simply, there aren’t any tunes, just disorganised bloops.

Dissonant modernist classicism from Guy Barash on his Facts About Water (INNOVA 893), a recording of four suites for small ensembles; the strings are particularly harsh and alarming on ‘Wrong Ocean for String Quartet’, and things don’t improve when trained classical soprano and tenor singers start to sing the texts of Nick Flynn on ‘Blind Huber’. ‘Seven Testimonies’, combining Barash’s compositional strategies with an attempt to flirt with digital sound processing and a “rock band” setting, is one notable aesthetic catastrophe here; he merely creates a pile-up of ugly noise. Produced by Elliott Sharp.

Martyn Bates of Nuneaton is known as the lead singer and songwriter in Eyeless In Gaza, a 1980s indie band who I never heard, though I gather the band’s lyrics used to display an inordinate interest in Kodak photographs. We previously noted their 2012 album Orange Ice & Wax Crayons. On his solo record Arriving Fire (AMBIVALENT SCALE RECORDINGS A-SCALE 048), Bates turns his attention to difficult affairs of the heart, frequently using metaphors drawn from the seasons, the weather, and nature. He is joined by a number of talented players on assorted unusual instruments, but the album puts his mannered singing voice and jangly guitar at the front of the mix. I found ‘Port of Stormy Lights’ affecting, a sound-melange involving a piano, sound effects, and distant echo techniques to invoke certain nostalgic moods. But it’s uncharacteristic of the rest of the album. Somewhat out of my line, but fans of wistful longing and highly personal emotions will appreciate Bates’ delicate approach to song construction.

I always hope I’m going to enjoy Dutch band Space Siren, perhaps because of the astringent colours of the cover art for If You Scream Like That, Your Monkey Won’t Come (KATZWIJM RECORDS KZ011 / SUBROUTINE RECORDS SR059) which seem to promise heavy-duty punk-noise action; it’s a visual technique that imitates how old Xerox machines used to work. The combo of Gwendolien, Ineke, Corno and Aico are competent enough at delivering some solid rock-propelled racket…the best songs seem to derive most of their force from studio overload, using tons of guitar layers and controlled distortion, especially for the vocal parts, so that singer Gwendolien often appears to be shouting at us in a high wind. There are quieter and less frantic songs here, but the more restrained studio enhancement on these reveals that Space Siren are more conventional than they first appear. One track references (and misquotes) a Syd Barrett lyric, which isn’t a promising sign.

Reanimation is the work of Michael Shanahan, who plays everything and wrote and produced the entire album Under The Last Tree on Earth (NO LABEL WIN062914) by himself. We noted his previous work Giants Hide Among Us in 2014, and Last Tree displays the same hallmarks of consummate care in the building of rock-based songs and slightly more ambient-y instrumentals. Reanimation’s music is not particularly “experimental”, and indeed some sections of the album are quite ordinary four-beats synth and guitar music, but Shanahan has a lot of personal conviction behind his ideas, and his studio craft supports that.

Hugely enjoyable retro-guitar rock splurge from Alien Whale on their vinyl ten-incher of same name (CARE IN THE COMMUNITY RECORDINGS). Colin Langenus has won his spurs both as USAISAMONSTER and his astonishing Colin L. Orchestra release for Northern Spy. Here, he’s not crafting orchestrated pop tunes, and instead shamelessly wields his guitar in overamped manner having much wild and freaky fun. Matt Mottel from Taliban adds keyboards, and the drummer Nick Lesley from Necking completes the trio. Not especially underground, avant, or “out” music; to me it sounded like a doubled-up Hawkwind, while other reviewers have likened it to Hendrix, The Stooges, Black Sabbath, Blue Cheer, and King Crimson.