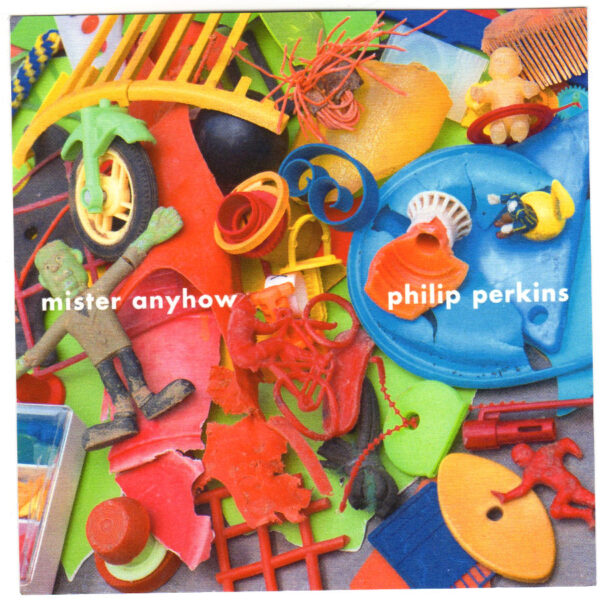 What a pleasure to receive Mister Anyhow (FUN MUSIC FUN N4), a collection of live studio recordings from the desk of Philip Perkins, in a package which arrived 17th September 2014. Perkins is a new name to me, but I’m baffled why he hasn’t shown up on the radar earlier, considering his impressive CV which also happens to tick a lot of Sound Projector boxes. A film-maker, electronic musician and composer who has “done” John Cage and versioned the work of Samuel Beckett, but also a friend and associate of the great “Blue” Gene Tyranny, whose more obscure records he released along with albums by David Ocker, Scott Fraser and himself on his own Fun Music label, an imprint active since the early 1980s. Plus, he was a member of The Residents tour band in the 1980s and directly assisted in music and video projects for them, including The Mole Show and the American Composers series. Plus there’s his 1970s band The Bifurcators…if thine appetite by whetted just by this paragraph of name-dropping, by all means investigate items still in print and for sale at Perkins’ website, where he’s principally advertising his services as a post-production engineer for audio and video work.

Mister Anyhow is an extremely beguiling set of mysterious and very beautiful music. Only three tracks in and already I feel like I’m enjoying a particularly luscious, memorable, and endless dream…a cornucopia of imaginative brain-food served during the nocturnal hours when no-one is watching…cloudy abstract soundtracks for surreal inventions, fit for inspiring even the most torpid of painters and fire them with desire to pick up a brush and emulate Di Chirico, Delvaux, or Ernst. In places, I can indeed sense why The Residents recognised a kindred spirit in Perkins 1, and it’s not just the use of unusual treated electronic sounds, it’s the abiding sense of strange and slightly worrying atmospheres, the forming of beautiful sound maps and islands which are shrouded by storm-clouds over an invisible horizon. That’s surely a mood which matches perfectly the threatening scenarios of The Mole Show trilogy, with its themes of displaced refugees and environmental ruin. If Perkins had collaborated on the Eskimo project, for instance, I’d venture to say that work could have been realised in a much more satisfactory manner. Perkins explores areas which even The Residents have feared to tread.

The other observation I would make is the absence of conventional “structure” to these 2011-2014 compositions. Perkins may lack the clarity and crisp delivery of “Blue” Gene Tyranny’s well-ordered music, but instead he offers us a form of free association in sound, a gentle but firm combination and admixture of many interesting elements, where the overall arc of the piece is determined by a logic we cannot easily apprehend. This may be why I reach for dream-logic in attempting to account for the music’s power. It seems to drift, but not in a predictable programmed ambient-music manner, and our tiny rowboat passes over many wonderful oceans and through many weather systems, before we realise we are hopelessly off the map. In all these aspects, Perkins’ work somewhat resembles that of Carl Stone, with whom he has also worked, except that while I have found Stone too eager to please his audience with user-friendly soft sounds and pleasant chords, Perkins remains more obdurate and inscrutable. I’ll make no wild guesses as to how this gorgeous music and sound art is generated, though Perkins drops one clue to his methodology on the back cover, stating “apologies to anyone who isn’t happy about their voice, music, or sounds appearing here”, a phrase which suggests something about reprocessing found and pre-recorded sounds. On website, he further indicates the works “reflect the then-current state of my thoughts, emotions and the world at large”. But even this doesn’t begin to account for his unique visions and powerful imaginative force. It is my guess that the creative process is permanent with him; it doesn’t just happen at the editing suite or in the studio, but is happening all the time in his listening, observations, and selection of sounds from the world. What a gorgeous record; genuinely accessible, personal, distinctive, and exploratory, everything that “experimental” music should be. Highly recommended.