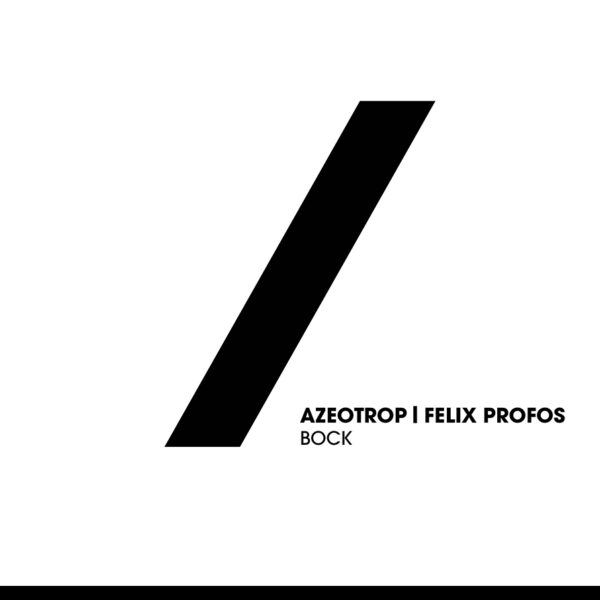 This is the fourth release from the marvellous Deszpot stable and I’ve totally dug the previous three in a deep, deep way. I’m happy to say this number four does not disappoint. This time around we’re subjected to an explosive, muscular, jazz-influenced, noisy improvisation from this group of accomplished musicians. For me, and bear with me here, it is a kind of brilliantly inspired 4-era Soft Machine/Process Of Weeding Out by Black Flag hybrid. The reprobates collectively known now and for all time as Azeotrop responsible for this tangible disarray are: keyboard player Dominik Blum and drummer Peter Conradin Zumthor who join Felix Profos (who wrote all the selections titled Bock).

Track one, ‘Bock 1: Horn’ is immediately disorientating; panic and anxiety set in straight away. Atonal keys, scattershot drums, waves of ten-finger chords. The next blunt instrument is Bock 2: Marsch which sounds like an early 70s Soft Machine grouping just before they all left Mike Ratledge on his lonesome gone mad. Artefacts of drums from recorded-over cassettes. Keith Emerson thought he was an out-there keyboard player – ha! Dominik Blum is the crazy at the controls of this possessed Hammond C3 organ.

Track three, ‘Fieber’, by contrast, is like a really, really relaxed version of The Bad Seeds. Dank reverberant spaces are used to record, chop and loop the drum-kit, or it seems more likely in reality to have been recorded inside an old fashioned plate echo room. Church spires with frayed dress shirts open to the navel pierce the sky while dissonant organ keys are held down by prayerbooks and those funny little embroidered cushions. Keyboard drawbars open and close evilly while foul-smelling smoke pours out of the pipes, choking any remaining woodpigeons still sheltering under the eaves of the roof. I wonder if there are many actual drawbars left in this digital world. Nord’s electric pianos use sliders which isn’t really the same thing and Oberheim used to do a digital organ emulation keyboard with drawbars, but it seems it’ll not be long before every keyboard instrument features a touch screen control surface. Ah, the modern world! All of a sudden we cut to ‘Bock 3: Bann’ whereupon a strange time signature throws its weight around – a sinister fairground vibe to this one, the way the right hand explores melody while the left blocks out chords as if it were bricklaying a garden wall. The drums keep up bravely. This track finishes just before it runs out of steam completely.

The fifth piece, ‘Bock 4: Ritt’ utilizes brutal bass / cymbal work, in a relentless attempt to pulverise your brainstem, while finally ‘Mühle’ presents a welcome slew of warm tones; slow, relaxed cymbals and tom work, gamelan in feel, almost electronic; dust mites giving me a great feeling of wellbeing after the insidious ground assault that is ‘Bock’. But then there’s ‘Gong’ literally, a blooming great big gong! The peace is shattered! Panic and anxiety return, but it has never felt so good. Like jazz slow-core doom metal. Now they’ve got their hands on some giant bells. An even bigger gong than the one on the old Rank Cinema titles. Tuned or sampled, cuts into silence. Jesus. It’s all good.

‘Bock 5: Loch’ is like a hung-over Godzilla, tottering crazily, holding its head, flattening a seaside town. It seems like there’s some kind of tone generator being triggered by the bass drum, or it could be an effect added during mixing or mastering, or even just feedback, but it gives the drums a sense of brutal authority which I really like. Track nine, ‘Dresden’, thrills with the sound of alien trills from the organist; tape delays floundering over the recording and playback heads, fluttering brushes on snare drum, and occasional groans from some giant nameless entity. The final piece, ‘Bock 6: Pupillenschmerz’, is a two-minute sketch made from the scorched remains of the instruments while the smoke clears, sparks fly from dislodged sockets and bits of plaster fall from the studio ceiling.

In all, less than forty minutes of psychotic, nervous exhaustion crammed in, committed to disc. I can’t recommend this highly enough. And there is a previous Azeotrop album on Grob going by the name 2006 which I shall now be on the look-out for.