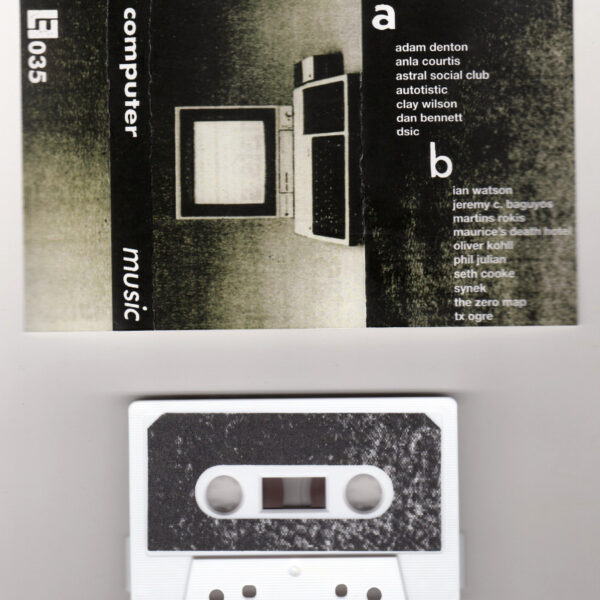 Very good cassette compilation from the LF Records label, with 17 artistes assembled under the banner Computer Music (LF RECORDS LF035), including many friends and accomplices of the label owner dsic (by which I mean a few of them have appeared on this label in one shape or form). The website blurb calls attention to the slight irony of having computer-based music released on “old-time magnetic tape”. The digital origins of this music, if that assumption is correct, may in fact gain something from being transferred onto oxide, because the overall sound that projects from this cassette is far from being “inhuman” or “clinical”. When laptop music was a relatively new thing – I suppose I’m now thinking about the mid-1990s – I have a vague memory that compilations of this exciting new music released on Touch or Mego were far “cleaner” than the music here, even when they delivered great scads of insane, programmed noise.

By contrast, what’s the general vibe that oozes off LF035? It’s depressing, bleak, broken, dismal and rather gloomy…incoherent slices of vague and nondescript noises adding up to less than zero. I hasten to add that this is not a negative assessment and I count this achievement as a complete triumph…it suggests how the golden dreams of computer technology have become tarnished very quickly…the possibilities of the internet are shown to be a rusty steel trap instead of the limitless freedom we’d hoped for…the promised bottomless pits of information have turned out out to be barrels full of gibberish and trivial inanities…and all software and web services are in the hands of multinational corporations, sucking the life out of our bodies through our very fingertips as we blindly stumble along in the social media quagmire.

Contributors to this nightmare include Anla Courtis, Astral Social Club, dsic, Ian Watson, Phil Julian, Seth Cooke, and TX Ogre (those are the names I’ve heard of). All of these have distinguished themselves on record with their strong personalities and musical flavours, but what’s interesting is how they surrender their identities and all merge together on this comp, whether by accident or by the design of the compiler, and most of the sounds we hear advance the agenda proposed above. Net result is a superb absurdist update on the industrial noise genre, full of alienating emotions, strange chilling beauty, grisly noise, fragmented sketches and bizarre drones. Great! Arrived 5th September 2014.

The record by G.I.A.S.O. – the Great International Audio Streaming Orchestra – appears to be the latest missive in a series of dispatches from “internet orchestras”, of which the previous manifestations known to us include APO33 and their 2013 record BOT: Compositions Continuums des Machines, and the laptop trio pizMO. Very coincidentally, the same names tend to turn up among all these projects, and they are all released by Fibrr Records. On G.I.A.S.O. (FIBRR:014), we hear music which has been captured live at various festivals in Bourges and Bergen between 2013 and 2015, while the sleeve prints the names of numerous pan-European members of the orchestra between 2012 and 2014 – including Jenny Pickett, thenoiser, Kadet Kuhne, Crdik Croll, Romain Papion, Julien Ottavi, and many more.

Unlike the grim Computer Music above, this CD offers a far more sanguine view of the prospects which IT can offer us for music creation, sharing, collaborating, and creativity. The project proposes that the music created exists in the internet, an arena of freedom which is embraced for its liberating possibilities for collaboration and “collective sound production”, and when it comes to a live performance, it’s mostly a matter of turning on a stream of musical data – drawn from numerous musical channels – and recomposing / re-ordering this stream in the live venue. In so doing, one of the things they wish to do is challenge the old notions of what an orchestra is, and propose new compositional forms…I suppose a lot of this derives from the fact that there is no single “location” to the sound, it’s all just gobbets of digital data residing somewhere in “the cloud”, and the 19th-century idea that violinists have to travel to a concert venue and appear in person to perform music under the baton of a conductor, is being undermined. The other side to it is the emergence of a “virtual musician”, where the orchestra members are only known (if at all) by their online names, and it’s not crystal clear who is contributing what at any one time. To further demonstrate their altruistic intentions, the record is released under a Creative Commons License, another internet phenomenon which was invented in order to free up creative sharing of content and ideas from the old restrictions of copyright law. The very fluid membership of G.I.A.S.O. likewise contributes to this part of the plan, dispensing with the old ideology of egos and star performers.

As ever, when being spun these ambitious ideas about radical recreations of music, one finds the actual sound of the record a little disappointing; this album, for instance, is mostly continuous streams of samey-sounding digital murk and drone, with only occasional variations which don’t seem to do much to redirect the river of content in interesting new directions. But it’s still a compelling drone, one which simultaneously lulls you into a false sense of security with its purring tones, while still keeping an undercurrent of slightly edgy noise bubbling beneath the surface. The lengthy, drifting nature of each piece can often steer the listener into an unexpected and even somewhat bleak backwater of unfamiliar tones; much the same dangers as you find when surfing the net, in fact. Even if the finished results seem a bit lacking in dynamics, I still applaud the ideas and the methodology here. From 5th September 2014.