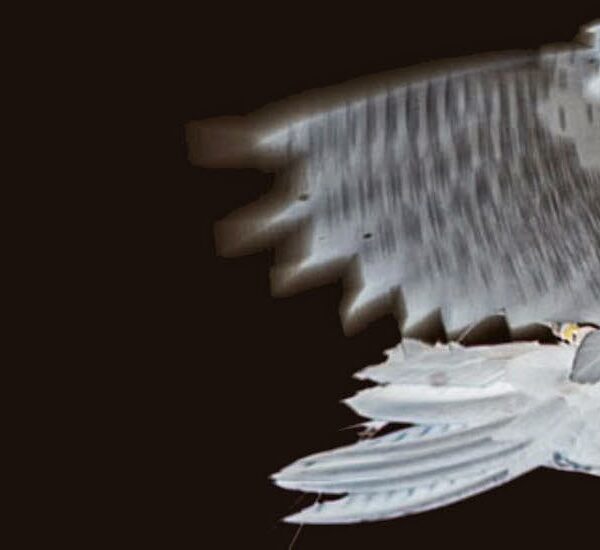 Erstwhile Records always seems to be on the lookout for unusual musical duos, and this pairing was obviously too good to resist: Pisaro is a member of the Wandelweiser ensemble with their interest in low-key minimalist improv, and Lambkin’s background is mainly in the visual arts but lately he’s become a musician in his own right. This album whose name translates into English as “A Giant Black Butterfly” is an otherworldly place of dark nocturnal and often sinister soundscapes. The album’s gatefold cover is nearly all black save for white print and a ghostly half-image of something rapidly beating its wings in the utter still darkness. Track titles reference a group of poems “Pierre Lunaire” by Albert Giraud, and dwell on the topic of flying creatures inhabiting the temporal zones of twilight and night.

The music is very quiet if spooky and revolves around one instrument, like piano, holding the track together with repetition of sound or deliberately awkward and clunky tones, or as in “Ein eisiger Wind” a low, barely audible series of digital keyboard drones. The usually unassuming nature of the music has the effect of commanding all your attention, though on track 4 the clumsy piano melody is as brash as the overall minimalist approach allows it to be.

Reviews I have seen of the album mention that it is accompanied by text but my copy of the album did not include the text (or possibly I have lost it somewhere, that would not be unusual). I did find a short text piece by the two musicians at Tinymixtapes.com in which all the track titles are embedded: the piece can be read as six separate scenarios, one complete scene or combinations in-between. There is nothing to say that the six lines have to read a certain way so the listener is at liberty to treat them as unified or fragmented.

Who is playing which instrument, especially the piano, is not clear: for all I know, both musicians could have played it on the tracks where it’s most prominent. (At this point it should be said that both musicians are mainly guitarists yet hardly any guitar appears here.) That Lambkin and Pisaro might have defied expectations as to the kind of album they would create enables them to have some fun, and even in some of the creepiest and most oppressive soundscapes there is always some sound or effect that brings a light-hearted attitude.

The album isn’t nearly as sinister and menacing as it initially promised but then perhaps that was the intention: within each soundscape, something expressing its polar opposite is to be found at the music’s core. Its aspirations to seriousness at times are undercut by a playful attitude. The album could be a whole yet within the whole, something is aiming at fragmenting it.