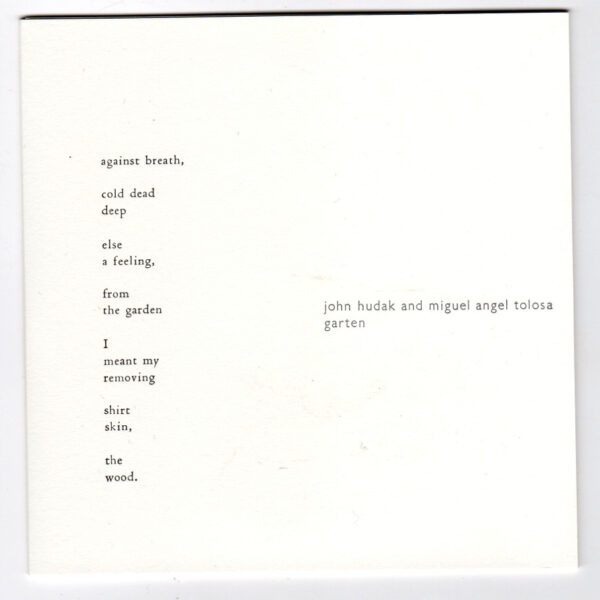 A beautiful and intense piece of understated sound art is Garten (WINDS MEASURE RECORDINGS 38), produced by the team of American sound artist John Hudak and Miguel Angel Tolosa, the contemporary music composer and sound engineer who is originally from Madrid but has studied and worked in Germany. Continuous 44 minutes of slow minimalism that may appear featureless to the point of emptiness, but as usual some patient or attentive listening will reveal details and gently repeated patterns, and eventually convey the sense of music that’s somehow floating in the air rather than proceeding along a linear time-line. It’s created from the familiar methodology of treated field recordings, heavily processed and mixed together, but clearly done with great sensitivity by two pairs of hands and sets of ears attuned to a very close harmonic degree.

At least three clues are given as to the wider ambitions of Garten. Firstly, it’s got a poem printed on the front cover composed by Akira Rabelais, a polymath of impressive proportions whose website when glimpsed at provides an overload of abstruse and layered annotated information that would give Borges heart failure. Yet he’s compressed his erudite learning into 14 lines of haiku-like simplicity that even in a few short words give you enough imagery that you don’t need an album cover. Secondly, the work is dedicated to the Rolf Julius, or to his “memory” at any rate, and while we only know the work of this German installation artist from a couple of albums on Western Vinyl, it’s clear he was a grand master of the “total experience” installation, the type of sonic event that no human being could escape from once entered, yet realised with very simple and economical means. Thirdly, the creators suggest that Garten should be played “in loop mode during hours, days, weeks…”, thus aligning themselves with the small number of creators who want to embed a time-based art statement into infinity in some way.

John Hudak has come our way once our twice in the past, with memorable contributions to Geoff Dugan’s Psychogeography compilations, and on the Italian AFE Records label, and on a compilation with Guido Huebner, Ios Smolders, and the like. From 29 September 2014.