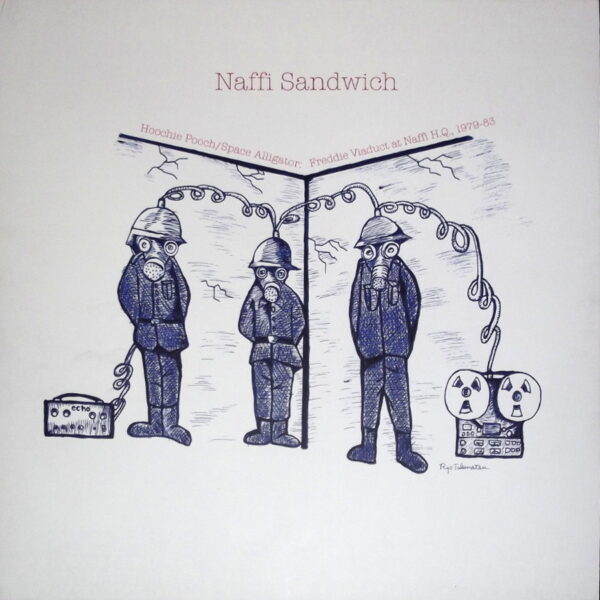 Freddie Viaduct is a name that’s half-familiar to me as he produced and engineered the Bomb Sutra EP for The Mel-O-Tones in 1985, a band who happened to be living in my home town Liverpool at the time (I got to know their singer Frank Martin through John Bagnall, fellow cartoonist). I recall purchasing Bomb Sutra from Probe Records in Liverpool, and have a memory of seeing the record by Brenda and The Beach Balls for sale around that time as well – which is no surprise, as it was also released on the Probe Plus label, presumably operated by the maverick Geoff Davies who ran this fondly-remembered record shop. If only I’d had the presence of mind to buy a copy. But everything comes around to enjoy its place in the sun eventually. Before me now is a copy of Hoochie Pooch / Space Aligator: Freddie Viaduct at Naffi H.Q., 1979-83 (EM RECORDS EM1116LP), an entire LP of music by Naffi Sandwich compiled from various now-rare cassette tapes released between 1979 and 1983. The core trio of Naffi Sandwich was Freddie Viaduct (i.e. Gerry Kenny), Brenda Ray of Brenda and The Beach Balls, and their drummer Captain Catchpole, though other guest musicians here include Keith Cole, Eugene Lange and Big Jo Ross. The Liverpool connection is that they were doing it in Earlestown, part of Newton-le-Willows in St Helens.

From reading the cheery sleeve notes provided by Kenny and Catchpole, it’s fairly clear they were pretty eccentric then and at time of publication (2013) have gotten even more bizarre, long of beard and out-there in the realms of Viv Stanshall-ness. What comes across is how the trio formed a tight little unit of like minds at the time, a charmed circle which no-one else could enter. The main reason being was because other musicians either took themselves too seriously, or were too “good” technically speaking. Naffi Sandwich was all about fun, and spontaneity, living in the moment and not harbouring any illusions of timeless greatness. As such, the music was recorded directly and “instantly”, often using cheap equipment and home-made instruments, and celebrating the raw joys of lo-fi in ways which studio producers would nowadays give their back molars to try and emulate, only they don’t make an app for that, so today’s digital devotees are left nowhere. Also part of the fun is weird aliases and funny names, often with multiple variations and spellings – and utterly bizarre covers for all the Naffi Sandwich cassettes, some of where are lovingly reproduced here. To behold just one of these artefacts ought to bring joy to the heart of any sensible English loon.

As to the music, yes it’s clearly influenced by dub – a genre which they all clearly loved, especially the drummer…with Viaduct’s bass and Brenda tootling happily with poppy melodies on the melodica and saxophone, together they managed to concoct a home-grown Angloid and slightly warped take on the dub genre that is irresistible to these ears, at times sounding even more rootsy and ramshackle than the real thing. Much as we may love General Strike and The Flying Lizards, these David Cunningham projects were somewhat precious and mannered in comparison to these fun-loving Northerners, for whom making music seemed as natural as breathing, partying, and going to the pub (which was often used as the staging post between overdubs for various sessions). The use of crude reverb and echo units alone would be enough to make King Tubby turn in his crown, and lead Scientist to become a Creationist. Freddie Viaduct brought that sensibility to the Mel-O-Tones, and turned the drum and guitar sound of that latterday garage band into an extremely evilled-up version of swamp voodoo rockabilly, one that even outdid The Cramps working with Alex Chilton.

Other hipsters will also know Naffi Sandwich for their 1979 seven-incher on the short-lived but cherishable label Absurd Records (Slice 1 / Slice 2), a label also home to such luminaries as Gerry and The Holograms, Eddie Fiction, Blah Blah Blah and Bet Lynch’s Legs. As for Probe Plus, it was only a few years after the Mel-O-Tones that the label struck gold (well..) with Half Man Half Biscuit. All praise to Em Records for keeping these flickering flames of yesteryear alive.