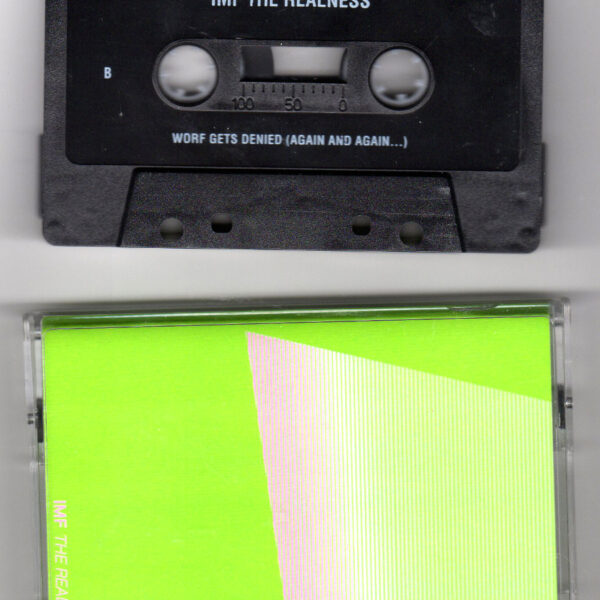 We noted the duo Keroaän in 2012 with a mini-CDR release on the New York label Copy For Your Records, where the team of Ian M. Fraser and Reed Evan Rosenberg violated all that’s holy about common sense and rational thought with their highly destructive and relentless approach to pre-programmed, random generated computer noise. An irresponsible wallowing in controlled digital chaos it were. It was a sickening prospect, and my nausea is not eased today when faced with a cassette called The Realness, an already sold-out item of short duration by Ian M. Fraser released and sent from his Philadelphia HQ, and published under his IMF alias. It’s an unpleasant combination of digital storms, static, piercing tones, and assorted vortexes of dangerous sharp-edged metallic rubble flying about at high speed…you take your life in your hands if you enter this world without a helmet and visor and full body armour. Besides the excruciating surface effects, there’s also the sense of a malignant, remorseless logic which drives the music; if a computer virus could sing, this would be its theme tune. “Hard hitting, non-linear equation synthesis heavy algorithmic noise” is how the creator describes it; I’m waving the white flag, and getting new anti-virus software tomorrow. Exceptionally powerful and uncompromising. A digital download can be purchased here. From 14th October 2014.