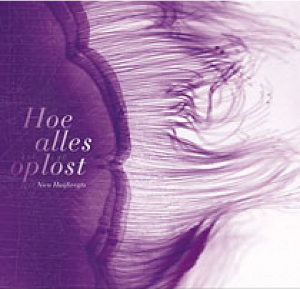 Nico Huijbregts is a “Pianist, composer, visual artist”, according to his website. In terms of biography, there is little more specific evidence of his many and varied achievements, but I did glean that he produced his first musical composition, Etude – For Piano in 1991. Vindu Music have released another three Huijbregts albums previously; 2009’s Free Floating Forms, 2010’s Falsche Tango and Dialogue Dreams from 2012. On his site, there is a welcome surfeit of his music embedded in Soundcloud players which enable the curious listener to get a complex overview of his music and also some examples of his painting, which for the sake of brevity I shall describe here only as of the abstract variety and quite colourful, many with a strong sense of movement; by all means investigate further if you think you might like that kind of thing. There is also photographic evidence here that Mr Huijbregts enjoys playing piano in the sea on more than one occasion. Actually, this is a very fine website, full of clear, concise, easily-navigable examples of the artist’s activities – I wish more multi-media artists would promote themselves in such a straightforward manner.

Hoe Alles Oplost, or “How To Resolve All”, is a mixture of recordings of five pieces by different groupings or soloists all produced and overseen by Huijbregts himself at Galloway recording studio in Nijmegen in 2013. Huijbregts uses the term “chamber music” to describe these pieces, an interesting concept in these modern times; “music for small ensembles of instruments and/or voices, usually one instrument to a part, intended to be performed in the home or in small concert halls” so says my Dictionary Of Music.

Starting proceedings is the percussively titled ‘Katatatatonie’, a solo piece for clarinet performed here by Tui Clark. It’s a delicate piece and played with sensitivity by Clark who skilfully increases the anxiety factor as the music develops. The next piece, ‘Farfánesque’, is way too maximalist for my taste, although it sounds like it would be right at home on BBC Radio 4 having as it does, a kind of Vaughan Williams sense of urgency about it. Ensemble Black Pencil play on this; Jorge Isaac on blockflutes, Matthijs Koene on panflute, Esra Pehlivanli on viola, Marko Kassl on accordion and Enric Monfort on percussion. Elsewhere on the internet, Huijbregts declares this piece derived from “musica llanera”, the Venezuelan folk style. I have to take his word for it – I’m no expert on this genre, although it does appear to be massively popular in its homeland. Perhaps the basis for this assertion is in the way Huijbregts has dealt with the percussion, although it reminds me of Moondog in parts.

The end of the third piece, ‘Only You’, there is unexpectedly, at least to me, the title refrain from The Platters’ 1955 US top ten hit of the same name, here sung by Huijbregts’ recording engineer, Sebastiaan van Bijlevelt. A nice touch, even if its inclusion possibly started out as a bit of a jape. This recording features the Alauda Quartet; Hans Rijkmans on violin, Kees Hilhorst on violin, Francis Saunders on viola and Maarten Jansen on cello. ‘A Passive Goal’ is Marieke Franssen on flute and Goska Isphording on harpsichord. The term “chamber music” is most appropriate for this piece, perhaps because of Huijbregts’ choice of the acoustically relatively quiet harpsichord, which of course is a common instrument historically found in the homes of the super-rich before the development of the modern piano. Interesting that 300 years ago a status symbol would be a wonderfully, hideously expensive musical instrument that was actually used rarely, yet today for hedge-fund managers or retired captains of industry a Ferrari 488 GTB or Pagani Zonda serve the same purpose. Strident, compressed, this piece demands your full attention.

The final piece, and title track; the longest on the disc at fourteen minutes, is a solo by Kees Hilhorst on viol. I found this to be emblematic of Huijbregts’ approach: although not exactly an easy listen, his approach is fairly accessible and by this point in the album, I tend to find my mind wandering. Maybe that’s just me. Later, I listened to five minutes of this while Detrimental by Venetian Snares was playing in the same room and it all made perfect sense.

Single colour-printed folded card sleeve (in lilac), a busy line drawing featuring a list of timings handwritten, with insert listing a great many individuals without whom this album would not exist. No reasons given.