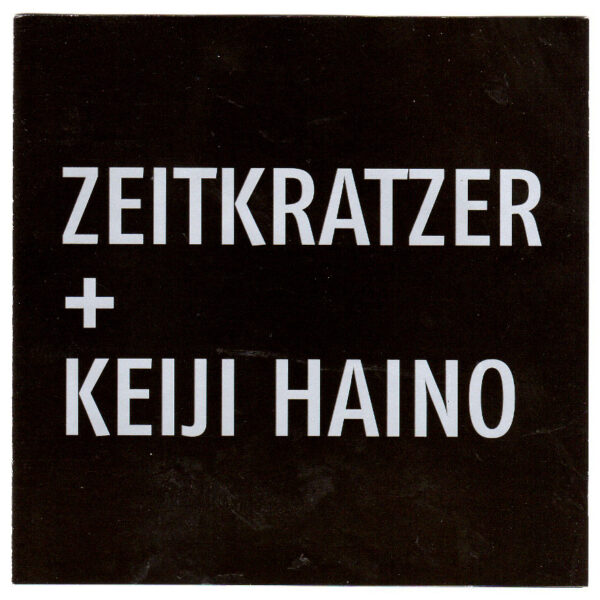 The team-up of Zeitkratzer and Keiji Haino once again turns out to be a very successful collaboration…we were aware of their 2008 monstrosity called Electronics, but it turns out they’ve been slapping sides together since 2005, when they first blarted out a concert in Berlin and drew plaudits from the well-manicured citizens. I thought the deal here might comprise a sharp contrast between the precise, carefully-calibrated compositions of arch control freak Reinhold Freidl and his men, and the all-out free-noise screechery of Haino as he enters his patented shaman-mode of high-mysterioso and shrouded cloaks…as it turns out that’s more or less the intention, as the liner notes speak of “precisely defined runways” being built by the Zeitkratzer chamber ensemble to allow Keiji to take off and fly like the Harrier jump-jet he clearly perceives himself to be. Flame on.

On the other hand, the music all fits together in such a seamless whole that any sense of contrivance or artificiality just seems to vanish away. There’s natural talent for you, I expect. What’s more, it’s unlike any recording I’ve heard from either of them, so perhaps the collaborative approach really does help musicians to become better, to haul themselves up ladders previously unreached and touch mountain peaks thought unconquerable heretofore. For the most part, it’s not at all a “noisy” record either, and while full of agitation and craziness at key points, there is a fine range of interesting and evocative emotional content that is rewarding and rich. Psycho-analysts check in now, if you want material for your next conference paper.

The micro-tonal iciness of ‘Roses’ is one of many standout cuts, which is pretty much Haino doing a “Nijiumu special”, keening out melancholic drops of intensity with his soprano wail, but doing it against a delicate and beautiful framework of prepared piano, celeste, muted trumpet and eerie strings…a real Friedl triumph in achieving a superior form of meandery “ambient” music by using notation and compositional dynamics instead of keyboard presets. Equally supernatural and indeed quite terrifying is ‘Ghosts’, a brittle and dissonant arrangement of taut strings, percussion sounds much like human bones being rattled in a mausoleum, and strange sweeping tones passing overhead like myriad phantoms. Haino explores this place of the dead with confidence and familiarity, clearly no stranger to the phantom zone, and his voice indicates he can not only speak their language, but also transform himself into a spectre at will. You could say Haino’s entire career has involved communication with the spirit world, emulating dead ancestors, and meditations on death, so this is meat and drink to a man of his calibre.

For fans of Haino’s more raucous leanings, the six-minute ‘Smashine’ should satisfy your urge for blood, as Friedl and company see fit to concoct a species of incredibly precise “free jazz” as if working from an architect’s blueprint, where the drumming is primal and the brass section are honking their guts out, but doing it all as if by stopwatch. This is one track where you can practically see Haino darting and leaping about the stage like a spiny stick insect…it’s a real hoppermaroo. ‘Cryogen’ meanwhile is just plain dark, the patented combination of “black and silver” which Haino has made his signature, and not just in the cover art of his albums, he inscribes the colours as some sort of abstract-painting undercurrent that informs his every musical statement. For a few moments of this short piece, chaos comes to visit your home in ways that will scar you for life.

I don’t quite find this album to be the “supernova” that one journalist at Chicago Reader has experienced, as that’s a term that implies some sort of enormous, public spectacle, not unlike a cosmic fireworks display. Instead it’s something far more meaningful, an album of intimate and very personal events unfolding like uncanny revelations inside the soul of the listener. Zeitkratzer are able to bring more focus and purpose to Haino’s unpredictable and secret explorations of the inner recesses of human psychological darkness, providing him with a microscopic lamp to enable his surgery to take place. From 12 September 2014.