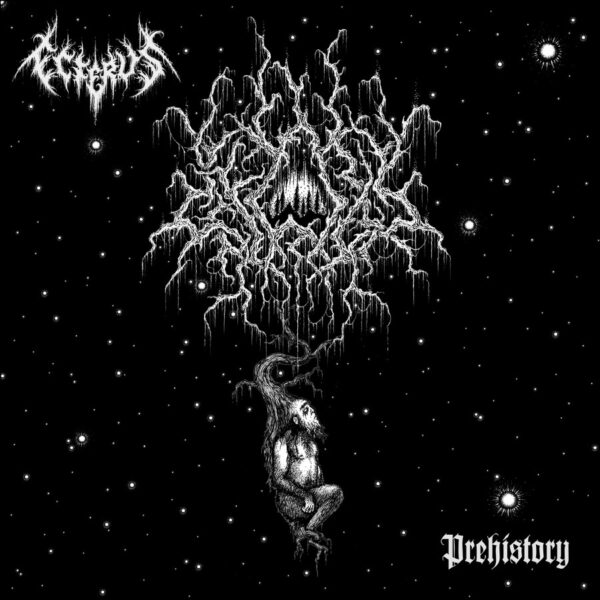 One-man BM act Ecferus has set itself a lofty ambition in exploring the journey of humanity from its early beginnings and the debut album “Prehistory” attempts to capture as much of that trek in black metal ambient form as possible in four – only four! – tracks. You’d expect the four tracks to be very long and meandering, with perhaps some loss of direction in parts, as befits a species from a long line of ancestors that sprouted branches that turned out to be dead ends over time.

The voyage begins with “Mitochondrial Eve” – hmm, an interesting title for a song (and a band!) – which is a harsh sprawl of equal parts bristling distorted-guitar riffing, angry rasping spider voice and plaintive piano-like melody. The song ranges from leisurely and melodic, to tight and grim tremolo guitar blast and flopping blast-beat drumming, to almost pop-friendly if melancholy passages of slow-ish music in the vein of Burzum’s 1996 BM classic “Filosofem”. While this is a long track, and the music varies a great deal, the lyrics that detail the human journey into forbidding landscapes of snow, ice and blizzard connect all elements together. On this and following tracks, there is a sense of wonder at discovering new worlds that have never been experienced by people before.

As the album progresses, listeners can imagine early human explorers meeting more than their fair shares of misfortune including death, and survivors pressing on in spite of tremendous obstacles ahead of them. As time passes and stretches into centuries, culture develops and creation myths, superstition and religion arise as people struggle to make sense of their surroundings and the things, good and bad, that happen to them. Space ambient and aggressive black metal together and alternately provide a strong backdrop encompassing aggression and foreboding at major changes (the Ice Age, the Toba eruption that nearly wiped out humanity 70,000 years ago) that threaten survival, fear and a sense of savagery. “All Become Sand” is a very chuggy track with hard-hitting riffs and percussion; the singing doesn’t change much at all and the ratty haranguing quality can be monotonous.

I feel that “Prehistory” basically sets out a sketch of what Ecferus plans to cover and expand on future recordings: while the music is good and the ambient music interludes flow smoothly between tracks with no loss of energy, the album does seem small scale for what it aims to do. The black metal is not very remarkable and is too busy for any drama to develop. Perhaps on later albums Ecferus may feel confident enough to add some symphonic or prog rock elements to give the music a more dynamic and intense sound.

Ecferus man Alp tries hard to express with a basic set-up of guitars, drums and some keyboard work the savagery of early humans and the harsh world they must deal with, to the point where this aspect of his inquiry into human evolution and history dominates everything else he does. I foresee that future Ecferus releases are going to be rather misanthropic works pessimistic about humanity’s ability to overcome or solve the problems that it has created which has brought Earth to the brink of complete disaster. While the Ecferus project is Alp’s to do as he wishes, I rather think the misanthropic direction is one that’s been drilled to death in black metal, and his project would benefit from a point of view that considers human nature to be less fixed and brutal, and more adaptable for good as well as evil; in this view, the direction we have taken thus far is one that is the result of hundreds or thousands of fateful decisions made by various individuals, groups or institutions for which better alternatives existed and were lost, either accidentally or deliberately. The tragedy then is that humanity is not innately evil and selfish, as seems to have been the presumption of Western civilisation over the last two thousand years, but that ideologies and philosophies based on that premise have shaped humans and society towards the point where the belief in innate evil becomes a self-fulfilling prophecy.