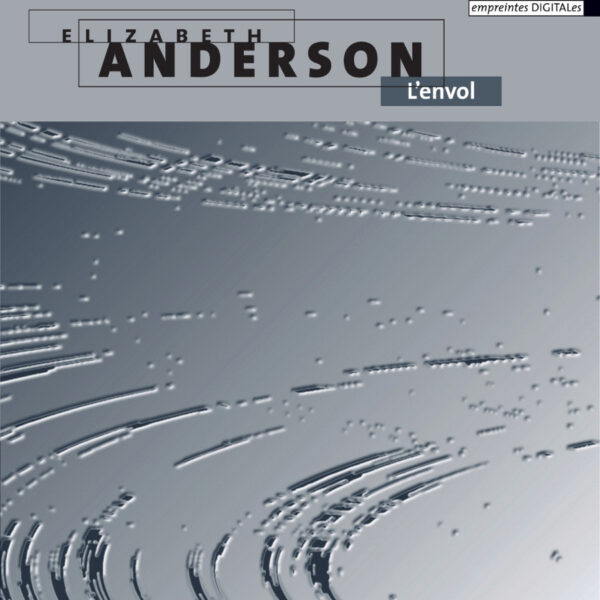 Empreintes DIGITALes expands its fold with two more softly-sung heroines of electroacoustic music and at this point one can easily pick a winner among any of the label’s releases, though pick two and you might find little drastic variation. If the label is a leader in its field, its scope is a narrow one: many are the glistening field recordings, processed Japanese musical instruments, hulled and spaghettified voices and avowed interests in humanistic sciences that have graced my humble ears since becoming acquainted 1. But then, why spoil a winning formula?

While not dramatically at variance with those of her peers, the compositions of USA’s Elizabeth Anderson still sound strikingly fresh (to ears not recently acquainted with this music, admittedly) and there’s a comfortable cohesion to the sequencing of two decades’ worth of work (1994 – 2014): glass-showers pummelling powerful liquid flumes; radio feedback collaged and spewed; riots of industrial klang and proliferating strands of deranged monologue that lend a historical vintage to earlier pieces such as ‘Mimoyecques’ (a meditation on imprisonment and death). With no piece shorter than eight minutes, these events course throughout like organic silicon life through a cosmic/atmospheric vastness, though there’s plenty of capacity to be startled by such as the abdominal explosions of ‘Protopia/Tesseract’, its lines of low profile flutes and bifurcating, rattling particles: variables that interact with a volatility expressive of the many conceptual oppositions (and harmonies) – principally the spiritual and celestial – that form the basis for much of Anderson’s work: the poetic tension of William Blake’s Tyger in ‘Les Forges de l’invisible’; the companionship of visible and invisible universes in ‘Solar Winds’ ‘…and Beyond’. Accordingly, her work displays all of the dynamic vigour found in the work of her peers, though it inhabits far remoter cosmic real estate.

Canada’s Roxanne Turcotte is more terrestrial in remit, turning eye to the turmoil of a human-ravaged planet (the Fukushima disaster among our many accomplishments), reflecting on our mortality and experience of time and taking a political stand in a piece written for Amnesty International – ‘Tout en Rouge’ – sourced from recordings from a 2012 demonstration an subjected to the usual laboratory procedures. If Anderson seats her compositions in the imagination, then Turcotte’s – produced primarily for installation and radio – are from the heart. Given the number of her dedications to the departed – quite powerfully so.

At the outset, Nos Fenêtres Intérieures opens the window on a naturalistic world of sound and ‘the passing of time seen from the inside’, revealing the numinous in the normal (birds, skates on ice, tires on tarmac) and the magnificent in the mundane 2, and to remind us perhaps of how much we habitually ignore as we amble about with our Sony headphones. Turcotte seems less concerned with occupying space than with drawing attention to its presence (or absence) via unassuming portraits of our environment (e.g. the garden aviary of ‘De la Fenêtre’) that quietly mutate as they grow in stature, as if poised to shock us with a tap on the shoulder the moment we’re feeling safe.

From an aesthetic point of view I’m less taken with the torrents of (French language) voices that occupy several pieces than I am those consisting of processed, non-human sound per se; particularly those involving musical instruments. ‘À la Mémoire de Martin’ for instance – a pathological study of modified electric guitar (that takes me back to some of the more time-bending instrumental moments on Squarepusher’s mutant jazz Just a Souvenir) – offers welcome respite from the deliberately uneasy cut n’loop vocal antics of ‘Alibi des Voltigeurs’, and ‘Le Piano d’Horowitz’ manages a similarly deranging feat while almost passing for untreated. At the same time, one finishes listening with the feeling that much has passed the radar undetected.

Quite a dramatic about-turn from the hyper-exacting electro-polyrhythms of earlier releases (and of Raster Noton’s house style), Frank Bretschneider busts out synths Buchla and Serge, follows the lead of psycho-acoustic tearaways like Florian Hecker, lighting a cigar to commemorate the birth of his equivalent of the pantomorphic protagonist, Rubber Jonny. Hands move freely, playfully belching out clouds of the squealing, mulching dementia the synths are known for; each of his eight, elastic chunks contorting itself as far from its initial form as possible without yielding its identity.

While such hecticity appears to have offended Bretschneider’s more conservative followers, the precedent is not unique. This beat-meister turned cosmic explorer rite of passage has been undertaken by Surgeon (aka Anthony Child) and others, whose work under his given name offers a prominent example. Is it that techno’s prescriptive economy of order and precision; its overwhelming panoply of subgenres is triggering meltdowns among its more omnivorous practitioners? Nothing wrong with cutting loose of course, and while epic works such as Akos Roszmann’s Images of the Dream and Death render most other such work superfluous, to the more rhythmically inclined, Bretschneider’s efforts might offer a rope ladder to such precipitous heights. Besides, these forty minutes are a hell of a lot more digestable than two or more hours.