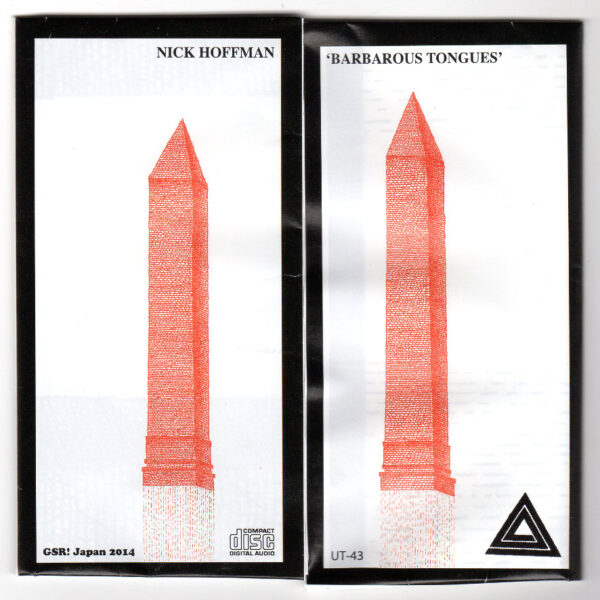 Barbarous Tongues (GRAVITY SWARM RECORDINGS UT-43) is a solo record by Nick Hoffman, the perplexing American fellow who’s been responsible a good deal of head-scratching at TSP over the years, mainly due to his refusal to sit neatly inside any known musical genre or category thanks to his obstinate insistence on the right to play heavy metal garage music as well as perform minimal improvisation in the art mode. He’s also stayed pretty much mute as to his themes, subtexts, meanings and intentions, leaving the published statement to say everything (whether it be in sound, images, titles, or all of the above). Personally I’m totally bewitched by Barbarous Tongues, which is one of his more solemn and portentous offerings, but I will remark that it feels like something of a break from his previous cryptical utterances. To begin with, there’s less of that annoying silence, and far less of that sense that pieces are left on tape unedited, unspooling in the raw as they happened, to fend for themselves in a cruel world. Instead, we’ve got quite a variety of sonic experimentation, pieces that start and end in a coherent fashion, and even something that feels like a succession of ideas and thoughts.

For the most part, Barbarous Tongues feels like Hoffman’s personal take on the death-ambient genre and its many variants, such as Cold Black Metal, Darkwave, or Industrial Drone…of course he does it enriched with a lot more intelligence and imagination, instead of trying to bamboozle the listener with cowls, masks, pseudo-ceremonial bullshit and spray-on atmospheres, tricks that seem to have worked across the world for others over the last twenty years and produced no end of worthless solemn drone CDs that are only fit for crappy horror movie soundtracks. Barbarous Tongues pares down the sound, refusing that simplistic “iron coffin doors clanging in Hell” vibe, and yet still manages to emanate deathly tones that are genuinely unsettling and menacing. The occasional mutant hissing that plagues some tracks is like the whispered threat of a sleeping assassin, waiting for you in the darkness. Chilling.

Among the general lugubriousness, two tracks that depart from the formula are ‘Lapis’, which could almost be a field recording of an entire army of crabs scuttling across a granite road, and ‘Stone Fountain’, with its shocking blast of table noise offset by a mysterious fire-alarm ringing in the classroom two blocks away, and a clock ticking away the final minutes we have left to live. With their “acoustic” feel, these two puzzlers escape the self-made trap of the rest of the album, which strives to create a hermetic environment of inescapable, smothering oppression. With their absurdist non-event narratives, they also create the uncanny sensations of a baffling dream.

That’s what I found with my two ears (and my warped brain), but a lot of the above is also probably triggered by visual associations and Hoffman’s carefully laid-out artwork inserts; for this release, he makes use of the grid design to locate his images in with surgical precision, almost as if preparing a musical score. A story is told as you unfold the package, in images of increasing size. The mysterious stone obelisk is one central motif, repeated thrice as a gigantic poster image when the artwork is unfolded. There’s also a vicious-looking rat, a typical Hoffman demon who is also an anthropophage, a black triangle Monad or Rune, dolls hung from a studio wall like trophies, and the Sutton Hoo burial helmet printed in lurid green…it has never looked so menacing, an implacable force of war and aggression from the past come back for vengeance. With assistance by Guilty Connector on one track, whose label also released this. From 15 October 2014.